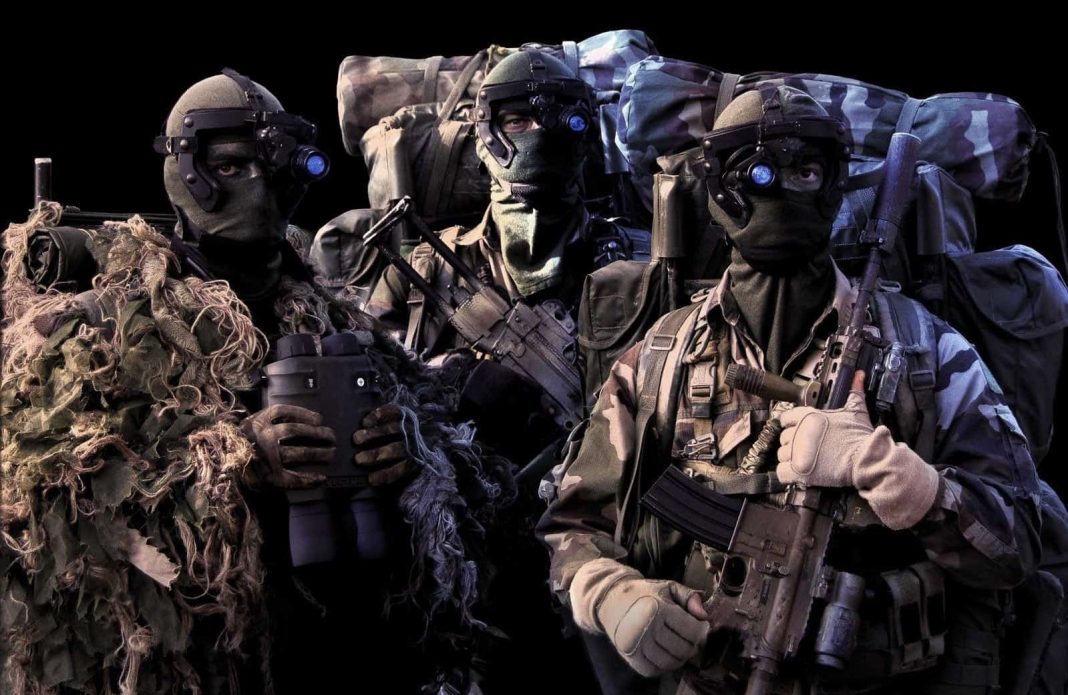 The 13th Parachute Dragoon Regiment (13e RDP, 13e Régiment de Dragons Parachutistes) is one of France‘s oldest and most prestigious recon units. The unit was raised in 1676 as a shock cavalry division by the Marquis de Barbezieres at Languedoc. the unit was re-raised in 1792 to assist in the Revolutionary Wars against Prussia.

The unit was given high honours for their efforts during the battle, and the victory at Valmy by French forces against Prussia is what led to the proclamation of the Republic. Since then, the unit has been disavowed and reactivated sporadically until 1952, which it is still active to this day. The 13th RDP has received honours for many other operations and battles throughout France’s history such as Ypres and Verdun in World War I and in Algiers in the 1950s. (Source)

Currently, the 13e RDP operates as an airborne reconnaissance unit, and is part of the French Army Special Forces Brigade in tandem with 1er Régiment de Parachutistes d’Infanterie de Marine (1er RPIMa) and 4e Régiment d’Hélicoptères des Forces Spéciales (4e RHFS). The FASPB is organized under the COS (Special Operations Command), which coordinates special operators and operations between the French Army, Air Force, and Navy. (Source)

Given the reconnaissance nature of the 13e RDP and their proficiency in long-range reconnaissance, France’s foreign intelligence service, DGSE, frequently fills their Action Division ranks with soldiers from the unit.

The 13e RDP is located in Martignas-sur-Jalle in France, and their mission mainly specializes in a long-range, hostile environment, and electronic reconnaissance and human intelligence (HUMINT) collection. The unit mainly works in Africa but has recently been shifting focuses to European matters.

The 13e RDP is organized as follows:

The unit frequently works with other units within the French military and police structure due to their calibre of expertise and training on recon and intelligence. The GIGN, (Groupe d’Intervention de la Gendarmerie Nationale) France’s elite hostage rescue police team, frequently train their officers alongside the 13e to gain experience in forwarding reconnaissance collection. (Source)

French special forces and reconnaissance groups are outfitted with an FN Scar-L or M16A2, drawing away from the service-issued Famas F1 and HK416 used by most French military personnel. 13e RDP also has access to the HK MP5 and MP7 as well as the FN P90, all of which are used by naval or special operations groups in the French military, and particularly favoured by reconnaissance groups. (Source)

The 13e uses some unconventional and albeit unique tools and tactics to gather information and carry out their missions proficiently. One tactic that was unveiled in an admission by a 13e operator was that in the days leading up to missions the soldiers do not shower, as the soap that use can be smelled by dogs or other people if they are in deep cover. The soldier also revealed some interesting collection devices the 13e employs, like fake cement blocks that are utilized as cameras, and fake stones that act as GPS targeting beacons for airstrikes and image collection. (Source)

The 13e RDP operates as one of France’s premier intelligence and reconnaissance collection units, as well as being on the oldest. Through the training and operations that these soldiers go through, it is safe to say that they are one France’s most elite units.