Muslim Brotherhood: A Tug-of-War in Africa 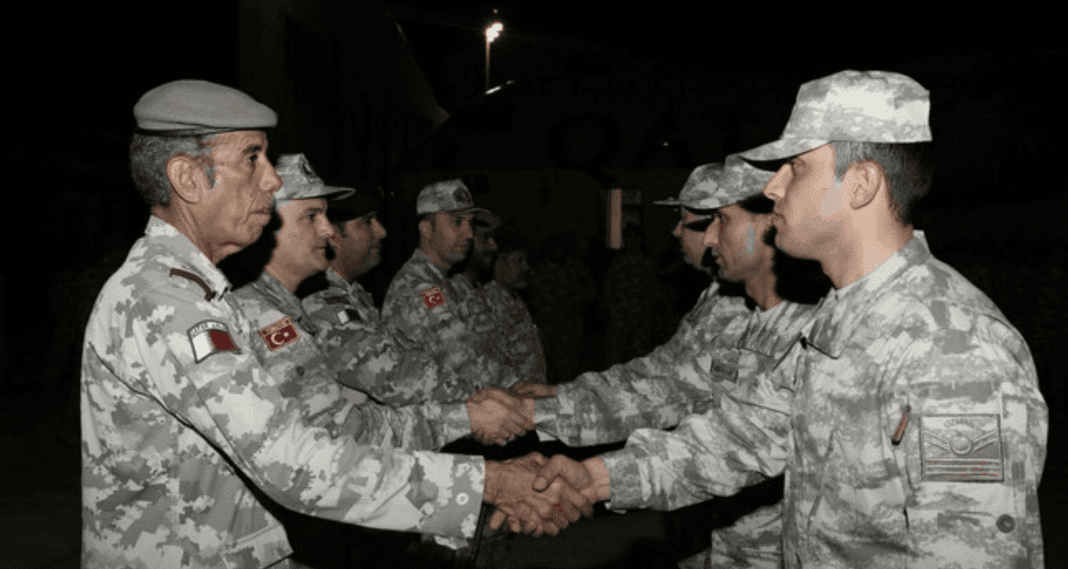 Turkey, Qatar, and the Brotherhood

As the other Gulf States increasingly began opposing the Muslim Brotherhood (MB) and political Islam groups after the Arab Spring in fear of the future of their own regimes’ stability, Qatar chose a different course and backed them. While the Saudi bloc viewed the MB as a threat, Qatar had hosted the prominent MB intellectual Yusuf al-Qaradawi since 1961 and given him a platform in the ’90s on Al-Jazeera where he hosted his very popular show “Sharia and Life.” Additionally, the Qatari branch of MB, al-Islah, was dissolved in 1999 so the threat of opposition domestically was not as imminent for Qatar as that of Saudi and the UAE who still had MB elements in opposition domestically.

Furthermore, Qatar’s role as a launchpad in the region for the Brotherhood had improved relations. Being the launchpad also enabled Qatar to use the far-reaching network of the Muslim Brotherhood to promote itself and increase its own influence. This reach is demonstrated in Qatari-funded projects in Europe involving mosques, schools, swimming pools, restaurants, and morgues from northern Norway to Normandy aligned with MB’s ideology of Islam present in all aspects of daily life.

As el-Sisi ousted the late Morsi in 2013, the UAE and Saudi Arabia believed they had dodged the bullet, considering the fate of their regimes dependent on the downfall of the MB. Qatar, on the other hand, allowed the MB to launch its anti-el-Sisi campaigns from Qatar which eventually led both the UAE and Saudi Arabia to withdraw their ambassadors from Doha in 2014. The issue was resolved two months later as exiled Muslim Brotherhood members who had escaped el-Sisi’s crackdown for Doha, left and was hosted by Turkey.

Turkish President Recep Tayyip Erdogan’s Justice and Development Party (AKP) has Islamic roots which it has increasingly used as an instrument of foreign policy by building mosques, financing religious education, restoring the Ottoman heritage, and advertising its unique brand of Islamic leadership. Erdogan himself was one of the students of Necmettin Erbakan in the 70’s, one of the most prominent preachers of Islamism in Turkey. In this era, MB branches in the Gulf helped support Erbakan and Turkish Islamists against the repression from the secular establishment. As Erbakan died in 2011, AKP’s support for the MB grew and seemingly sought to overtake the role Erbakan had played for Islamists.

Ideologically, AKP is aligned with the MB with an idea of Islam fused into all aspects of life, including government, mixed with elements of democracy. After the Arab Spring, the compatibility between the two became more evident. In the Turkish leadership, Turkey is the heir of the Ottoman Empire and Islam’s last fortress and the natural leader of a revival of Muslim civilization, a pan-Islamism objective shared with the Muslim Brotherhood.

Ultimately, the Gulf States broke with Qatar in the ongoing Qatar diplomatic crisis which began in 2017. The anti-Qatar coalition ceased diplomatic relations and imposed restrictions, banning Qatar from using their air or maritime space while Saudi Arabia cut off the only land-crossing. Reportedly, Saudi Arabia has attempted to dig a canal on the border to Qatar, the Salwa Canal, which would turn Qatar into an island. To end the diplomatic stand-off, the Saudi bloc requires Qatar to shut down Al Jazeera since its perceived Muslim Brotherhood influence on its editorial line, hand over MB exiles including al-Qaradawi, end military cooperation with Turkey inside Qatar, and end funding of terrorist organisations, which includes the MB. The disagreements between the two fronts fuel both issues and development in Africa.

In Libya, al-Qaradawi issued a fatwa permitting the killing of Qaddafi in 2011. The Qatar Armed Forces further contributed with six mirage 2000-5EDA fighter jets. Turkey contributed with frigates and a submarine for the naval blockade as well as six F-16 Fighting Falcon’s. With the fall of Qaddafi, the two sought a power transfer to Islamist powers. As we know, that has not happened yet. While the Saudi-UAE-Egypt bloc promotes and assists Haftar, Turkey and Qatar are assisting the opposition.

Since Haftar initiated his siege on Tripoli, Turkey has been supplying armed Islamists with vehicles, arms, and other military equipment in violation of the UN arms embargo. Similarly, a Qatari plane reportedly landed in Tunisia in April loaded with military equipment en route for the militias fighting against the Libyan National Army (LNA). Local commanders in Libya have stated that the support from Ankara and Doha calls on the Brotherhood and militias in Libya to maintain a stronghold there and preserve its influence in Tripoli. Meanwhile, LNA commanders are claiming that Turkish drones conducting strikes against them, which in that case seem to be an attempt to counter Chinese-produced drones operated by the UAE performing strikes on behalf of the LNA. While the fighting in Libya is conducted by LNA and the Islamists groups it is fighting, it is fueled, supported, and equipped by the blocs. Even the drone capabilities come from the two blocs whose disagreement is over political Islam and is bound in their views of the Brotherhood.

The rivalry is further playing out in Sudan where the Saudi-led bloc is now backing the Transitional Military Council (TMC) in return for favours which reportedly includes giving up MB exiles and giving up on the Suakin agreements made with Qatar and Turkey. Some reports also claim that the TMC is going to deploy forces of the Rapid Support Force (RSF), formerly the Janjaweed, in Yemen to fight alongside the Saudi-led coalition. After the RSF attacked the protesters in early June, Turkey seemingly took a stance against the TMC offering “brotherly” support to the people of Sudan.

Turkey had a fruitful relationship with al-Bashir in Sudan until he was ousted, allowing Turkey a military presence on Suakin island for the restoration project there as well as an onshore military presence to train forces from the Somalian Army in Sudan. Meanwhile, Qatar has been one of the largest investors in Sudan with a military presence also on Suakin island in relation to their port development project there. Domestically in Sudan, there are reported power struggles within elements of the TMC and opposition groups as some want a partnership with the Saudi-Egypt-UAE side and others with the Turkey-Qatar side. All of which is related to the power rivalry over the Red Sea and the Gulf of Aden.

The Red Sea and the Gulf of Aden power struggle is one involving the US, China, Russia, and the big regional actors – Turkey and Qatar, plus Saudi-UAE-Egypt, as illustrated by this map of military bases in the region. They seek influence in the Horn of Africa to oversee sea lines of communications that are vital for the global energy trade, piracy, and the Yemeni civil war. As they manoeuvre to increase their influence, their rivalry between follow them. The rivalry further prompt regional expansion of influence, which is why they are eyeing Africa, and why the MB is at the core of it.

The Gulf-based economic rivalry on the African continent began with the financial crisis in 2008 and as Western economies slowed down, the regional powers looked to Africa. In Africa, they found the potential to diversify their economies and reduce oil reliance, achieve food security by investing in African agriculture, expand their influence through religious charities that would “re-educate” Sufi’s to follow their Salafi Islam and seek to convert non-Muslims and to improve migrant workers networks for the import/export of labour. By 2016, the UAE and Saudi Arabia were the two largest investors in Africa except for China.

Economic interests in Africa continued to grow and with the Arab Spring, so did security and political interests. Major powers and piracy in the Red Sea and Gulf of Aden, political Islam, and the Yemeni civil war has addressed the need for the Gulf states to get further involved in Africa with military and intelligence cooperation to counter these threats. The security interest has led Qatar to deploy peacekeeping troops on the Eritrean-Djibouti border, UAE has trained and equipped Somali troops from 2014 to 2018, and the establishment of the Islamic Military Counterterrorism Coalition (IMCTC) in 2016 has enhanced military cooperation and intelligence sharing between sub-Saharan Africa and the Gulf states.

The countries have also increasingly gotten involved in western African and the Sahel, particularly Qatar has sought to restore and improve relations there. The battle for Africa is further evident in the diplomatic struggle to ensure economic and security cooperation. Between 2013 and 2015 Qatar built eleven new embassies in sub-Saharan Africa while Saudi Arabia opened nine and the UAE six. The UAE has further planned to open more embassies in western Africa in 2019 while Qatar is planning to open more embassies in sub-Saharan Africa. Since AKP came to power in 2002, Turkey has increased their embassies in Africa from 12 to 41 and are aiming to reach 50 in the foreseeable future.

While economic competition would breed development in Africa, the power rivalry and the conflicted political and security interests the two blocs are exporting to Africa can increasingly fuel societal separation between secularists and political Islamists. As Qatar and Turkey leverage the network of the Muslim Brotherhood to expand its sphere of influence, Saudi Arabia and UAE in particular seek to shut these networks down and Egypt is assisting them in that mission. We see it now in Libya, we see footprints of it in Sudan, and we will probably see more of it in the future as the Gulf carry on their rivalry on the African continent with competing agendas.