Action Division and the DGSE 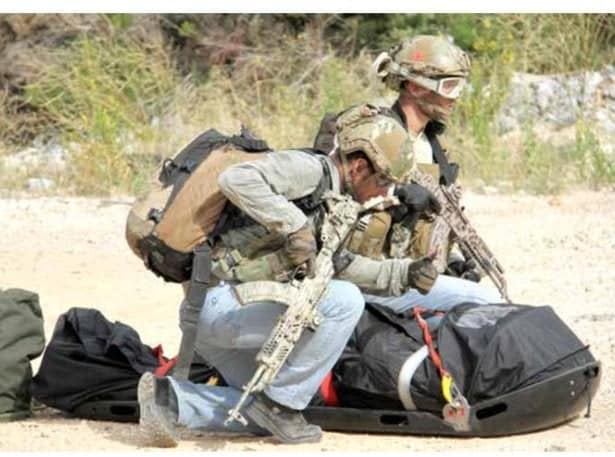 Background of the Action Division

The Action Division is the clandestine wing of the French Directorate-General for External Security – France’s foreign intelligence service.

France’s covert intelligence capabilities and the Action Division came to bear in World War II, after the SDECE (External Documentation and Counter-Espionage Service) was formed and the “Service Action” was created. The DGSE was formed in 1981 after the reorganization of the SDECE. (Source)

The Action Division was subsequently reformed from the Service Action of SDECE, and is still referred to as that by many. Officially, the Action Division, has been organized as independent units like the 11th Shock Parachute Battalion and the Action Division’s airborne component, Escadrille de Liaisons Aeriennes 56 Vaucluse (ELA).

Action Division commandos are since based in three “training centres” which compose the CIRP, “Paratrooper Reservist Instruction Centre”, where they receive specialized and unconventional training under three separate wings. (Source)

CPEOM is unique in the sense that Action Division agents are trained in a variety of maritime transport methods. This includes kayaks, jet-skis, crude and improvised rafts, and miniature submarines.

DSGE and Action Division agents are outfitted with a variety of weapons at their disposal. Commonly agents of French special forces and reconnaissance groups are outfitted with an FN Scar-L or M16A2, drawing away from the service-issued Famas F1 and HK416 used by most French military personnel. DSGE agents most likely have access to the HK MP5 and MP7 as well as the FN P90, all of which are used by naval or special operations groups in the French military.

The DSGE and Action Division have been active all over the globe in many infamous operations up until recently under SDECE.

In 2009, the DGSE had sent two agents in an “advisory role” to Mogadishu, Somalia for support of the Somali government. The two agents, under the aliases “Marc Aubriere” and “Denis Allex”, were soon captured by local al-Shabaab fighters and held captive. Aubriere was able to escape by sneaking out of the compound they were held in, trekking thru Mogadishu, and to the safety of the Presidential Palace. Allex was left behind in captivity. (Source)

Three years later, the DGSE attempted to rescue Allex. In short, the operation was a complete failure. Five helicopters and 50 Action Division commandos were sent to Bulo Marer in Somalia from a French Navy vessel in the Gulf of Aden. US signals intelligence forces and local Somali assets concluded Allex was being held the location in Bulo Marer, and the French swooped in. (Source) In a firefight that lasted under and hour, it was reported that a mix of al-Shabaab fighters and civilians were killed, an Action Division operative was killed, and another was missing. al-Shabaab later stated that they had captured the missing DGSE operative, but he later died from wounds from the firefight. In the end, it was reported that al-Shabaab executed Allex out of retaliation, and even taunted the French by implying he was never even at the location of the failed raid. (Source)

The aftermath of this operation soured ties with the French and Somali government, as the Somali’s condemned the military action as they were not made aware it was going to be carried out. Also, it was reported that civilians were shot without warning by the advancing Action Division operatives. Reports say that locals woke up to the sounds of helicopters landing nearby, when they turned on their flashlights to see, they were killed by DGSE operatives. In total, 8 civilians lost their lives to Action Division operatives. (Source) Overall, this operation combined with its relative recentness and the loss of a total of 3 operatives is a tragic reminder that not all operations go according to plan.