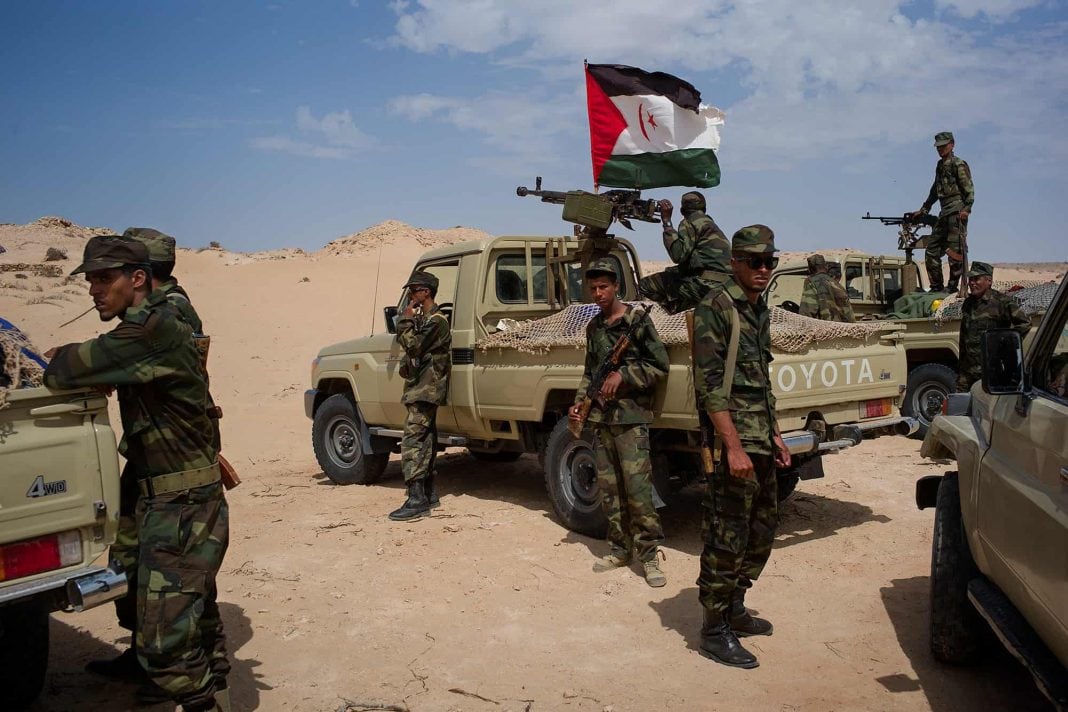 Western Sahara’s conflict between Morocco and Frente Popular de Liberación de Saguia el Hamra y Rio de Oro (Polisario Front) have been neglected by the international community for decades. Now, with new momentum, it is time to push for reconciliation or witness new generations of Sahrawi’s give up on peace and take up arms.

Two Fronts in the Making

Western Sahara was colonised by Spain until it withdrew in 1976. As the Spanish withdrew, three fronts arose to occupy the vacuum left behind – Morocco, Mauritania, and Polisario. As Morocco and Mauritania annexed territory, Polisario initiated guerrilla warfare against the two to limit their land grab. In 1979, Mauritania withdrew its territorial claim after the Polisario attacks.

The International Court of Justice ruled that the case both Mauritania and Morocco made for their legitimate territorial claim of Western Sahara was insufficient, recommending self-determination for the local Sahrawi people. One month later, 350,000 civil Moroccan’s marched into Western Sahara, protected by a force of 20 000 soldiers, known as the Green March. The crowd settled along the coastal areas annexing vast territories.

Following the political vacuum that emerged with the Spanish withdrawal, Polisario proclaimed the Sahrawi Arab Democratic Republic (SADR) to fill the political void. Polisario continues to seek recognition of SADR as a sovereign state and the legitimate government of the territories of Western Sahara.

Morocco received military equipment from the US in their struggle against Polisario which began in 1975 and intensified in 1979 after Mauritania withdrew their territorial claim. Meanwhile, Polisario established an alliance with Algeria in 1975 and acquired military aid and support from the Algerians.

Polisario deployed guerrilla tactics and particularly razzia style raids were carried out with modified and armed Land Rovers targeting Moroccan outposts. Polisario also used artillery and sniper fire to prevent the Moroccan’s making decisive gains. On the other side, the Moroccans were unable to make decisive gains partly due to funding. So, instead of pursuing decisive victory, the Moroccans began constructing a wall in 1981 which was completed in 1987.

The Moroccan Wall, ‘Hassan’s Wall’, or simply ‘the Berm’, spans 2,700 km, only second to the Great Wall of China in length. It is estimated that Morocco has as many as 120,000 troops manning the wall with bases located at about every five kilometres. The Berm itself is reported to vary from two to three meters high, equipped with barbed wire, electric fences, and radars in addition to the manned outposts. Along the Berm is the longest continuous minefield in the world. The exact extent of mine contamination is unknown though some estimate it as high as 9 million mines and unexploded ordnance. Moreover, the area along the Berm is one of the densest mine-contaminated areas in the world.

The Berm was successful in preventing guerrilla attacks and infiltration in the ‘Southern Provinces’ of Morocco and effectively led to, and reinforced, the stalemate between the two fronts. Eventually, a ceasefire was reached between the two after UN mediation in 1991 based on the promise of an independence referendum to be held the following year.

The United Nations Mission for the Referendum in Western Sahara (MINURSO) was established in April 1991 and paved the way for the ceasefire later the same year. The referendum scheduled to be held the following year as a part of the Settlement Plan failed due to disagreements over voter eligibility. In 1997, negotiations mediated by the UN revived the objectives of the Settlement Plan which sought a referendum for self-determination for the Sahrawi’s. The plan, dubbed the Houston Agreement, also ultimately fell through over voter eligibility disagreements. In 2003, the Baker Plan was endorsed by the UN Security Council. The plan outlined a five-year period of Western Saharan self-rule to be followed by a referendum in which both Sahrawi’s and Moroccan settlers would be eligible to vote. However, there would be limited voter eligibility in the interim government election, a factor that Morocco refused to agree to. The Baker Plan was accepted and endorsed by Polisario, Algeria, and the UN Security Council while Morocco objected and declared that Western Saharan independence was no longer an option.

In 2007, the responsibility of negotiations was handed over to the parties involved in the conflict from the UN after no further plans were put forward. Despite the changed level of involvement and lack of positive change, the Sahrawi’s are aware that the MINURSO mission is the largest international initiative to solve the conflict. However, the endless suffering has weighed heavy on the later generations and their faith in the UN has diminished greatly. UN’s annual examination and publication of the situation in Western Sahara takes place in April – the Sahrawi’s call it ‘la Mentira de Avril’ – the April lie.

The years of war forced many Sahrawis on the run. In the Moroccan part of Western Sahara, which accounts for 80% of the territory, there are 200,000 Sahrawi’s which makes up about 30% of the population. Due to the harsh desert conditions along with the contaminated land in the remainder 20% that is controlled by Polisario, the land is largely unhabituated. Rather, the Sahrawi’s fled to Algeria. In the Tindouf Province in Algeria, the Sahrawi’s are spread over five wilayas, or provinces, and the political and administrative ‘capital’ Rabouni.

The camps are habituated by 90,000 – 160,000 Sahrawi’s and administrated by Polisario while the exiled SADR government has its stronghold in Rabouni. The wilayas depend heavily on international assistance due to desert conditions. However, they are more self-organized than most refugee camps and enjoy less external interference. The camps have largely been peaceful and united in Polisario’s objective. This seems to be changing slowly.

Following the uprisings in Algeria, the wilayas hosted sit-ins, protests, and marches. The people participating expressed that they protested against the overall diminishing living conditions. Though inspired by events in Algeria, it was a mere question of time before the people in the wilayas expressed their dissatisfaction with current living conditions and lack of opportunity and alternatives, which are all rooted in the Polisario-Moroccan conflict. Moreover, appalling living conditions, lack of opportunity and alternative, and weak governance are trends evident in most of the Sahel, trends that also are linked with the increase in violence. The youth are becoming increasingly eager to take to action to disrupt the status quo in the hope of change, while Polisario is increasingly struggling to keep them patient. Adnan Abu Walid al-Sahrawi, the leader of IS in Greater Sahara, is one of those that ran out of patience. Born in Laayoune, raised in one of the wilayas, a member of Polisario, and protested against the Moroccan rule – al-Sahrawi is a normal Sahrawian that stopped believing in political struggle due to the lack of political solution. In the search for alternatives, he landed on jihadism.

Western Sahara is no goldmine of natural resources, however, those it does possess are all in the Moroccan territory. The longest conveyor belt in the world brings phosphate from the Bou Craa mines in Morocco-occupied Western Sahara to the port in Laayoune.

The vast coastline has expanded Morocco’s fishing revenues both through fish export and through selling fishing licenses. The European Court of Justice reaffirmed in 2016 that Morocco was not entitled to any sovereignty over Western Sahara, yet, in February 2019, the European Parliament voted to apply EU-Morocco Fisheries Agreement to the Western Saharan coast. Evidently, the EU and the West’s political will to go against Morocco on Western Sahara is limited due to economic as well as diplomatic ties, resulting in political paralysis and an indirect continuation of neglect.

The UN Security Council reported that 2018 ended with some level of momentum for the first time in years. This is due to increased US involvement under the new Africa strategy and the shortening of MINURSOs mandate from one year to six-month extensions at a time. Whilst the momentum should be exploited and reinforced, it remains a fact that the two parties are inherently polarized. Morocco finding the possibility of an independent Western Sahara unacceptable, while Polisario finds a referendum with such an option a necessity. Morocco is backed by the Arab League, SADR by the African Union, and the EU reluctantly.

Ultimately, Morocco seeks a continuation of the status quo while using trade and infrastructure to legitimate its presence in Western Sahara. Meanwhile, the Sahrawi’s are growing impatient and restless. The status quo might be a recipe for escalation in the neglected conflict.