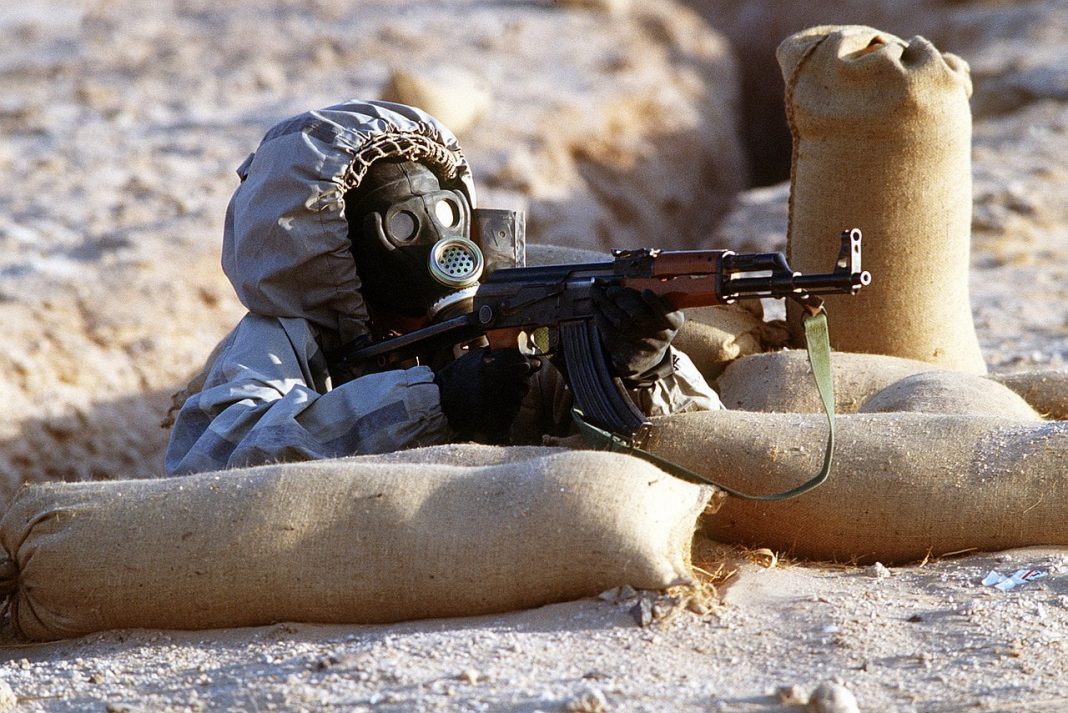 The AK-47: the world’s most ubiquitous assault rifle. The iconic rifle has been immortalized on the flag of Mozambique, tattooed on the faces of rappers, and in the artwork of thousands of pretentious hipsters. The weapon can be seen in video games, movies, and television shows. Over 30 countries manufacture variations of the rifle, including in caves. Over 72 million rifles exist in global circulation. The AK-47 has maintained a permanent fixture in popular culture for over 40 years and for good reason. The rifle is cheap and easy to manufacture. AKs have seen the inside of more brains than a neurosurgeon. However, it may surprise you that what you think is an AK-47 may not be an AK-47. So, what is an AK-47? What’s an AK-74? Well, let’s start at the beginning, with a young Soviet Russian tank commander by the name of Mikhail Kalashnikov.

The year is 1942 and Mikhail Kalashnikov is in a military hospital after being injured in World War II. Kalashnikov overhears fellow soldiers complaining about the inefficiency of their Mosin Nagant bolt action rifles and decides to get to work. In 1947 Kalashnikov finished designing the AK-47.

The rifle is revolutionary for the time due to its compact size, light weight, and utilization of an intermediate cartridge which sacrifices maximum effective range for ammunition capacity. In 1949 the Soviet Union officially adopted the AK-47 as its primary infantry weapon. Variants of the AK-47 such as the AKS-47 would see the inclusion of a folding stock. The original AK-47 was designed to use a receiver milled out of a solid chunk of steel. This process is expensive, time consuming, and requires skilled laborers to manufacture it.

By 1959 the Soviet Union realized that the manufacturing process for the AK-47 needed to be updated and began producing the AKM. The AKM traded out the milled receiver for a stamped steel one with the internal geometry being spot welded into place. This made the rifle even lighter, cheaper, and easier to manufacture. And thus, the worlds most prevalent weapon was born. When you think of an AK you’re probably picturing this rifle.

The AKM series of rifles saw many iterative upgrades as well as variants in the design.

Eventually the Soviet Union would develop the lighter 5.45x39mm round which increased the maximum effective range of the rifles and provided better terminal ballistics. The Soviets would also upgrade their rifles alongside the change in cartridge. This new rifle would be known as the AK-74 and would see its first use in the Soviet-Afghan War. Very little changed functionally between the AKM and AK-74 rifles.

By this point the AK had already expanded into a family of rifles, but the growth was far from over. In 1991 the AK-74 would evolve into the AK-74M. The most notable change in this integration was the switch from wooden furniture to more modern polymer components. Additionally, a folding stock became standard on all rifles.

By 1994 Russia released the AK-100 series of five rifles which applied the upgrades of the AK-74M to a new family of rifles.

The most recent variant of the AK is the AK-12 which is an attempt to bring the AK into the modern era and is a large departure from the original AK design.

Multiple spin offs of the AK have been seen throughout the years designed to fill a specific niche but the designs retain the basic controls of AK pattern rifles.

As a result, AKs of various origins can be seen in use all over the world. The AK-74M is the primary weapon of the Russian military and the AK-100 series can be seen in use by Russian special operations groups like Zaslon. Due to the rifle’s use by groups such as the Mujahadeen, the weapon would begin to develop a reputation as the freedom fighter’s weapon of choice. The rifle would soon be considered a counterculture alternative to NATO’s M16/M4 pattern rifles and there is nothing Western media and pop culture loves more than counter cultural icons.

The AK series of rifles have become pop culture icons over the past 70 years. As a result, there is no weapon more easily identifiable than the AK. The weapon has become synonymous with evil, with gang culture, and with freedom fighters. The AK can be seen on the covers of hip-hop albums and sitting behind Usama bin Laden. In the hands of rebel groups across the globe. Americans love the rebel, the concept of gangsters, and the freedom. The AK’s mass production and simple design made it cheap and readily available. When groups or individuals needed to arm themselves, AKs were the obvious choice. As a result, the AK became associated with these groups and the association with all these groups helped to catapult the rifle to international fame and recognition. The weapon has transcended its original purpose and become ingrained into the zeitgeist of the 21st century.

Movies are likely the biggest contributor to the AK’s rise to fame. In 1962 the iconic rifle had its Hollywood debut in the film Escape from East Berlin. The rifle would go on to be featured in classic films like Red Dawn, Apocalypse Now, Black Hawk Down, and countless others.

The AK has had a significant impact on the hip-hop genre as well. The AK is referenced by artists such as Ice Cube in his song Good Day. Artists like Future and Migos often use the term “draco”. Draco refers to the name given to a Romanian short barreled AKM variant imported for American firearms enthusiasts.

The weapon has also had a large impact on modern protest art. Due to the rifle’s association with rebellion and counterculture it features heavily in the protest art scene. AK47 is the nom de plume of Andy Link, the leader of a street protests art collective known as “Art Kieda”.

I would be remised if I didn’t mention the AK’s importance to video games. As long as there have been shooter style video games, designers have included the AK. The AK can be used by the player in games like Call of Duty and Escape from Tarkov. Pop culture references to the AK are uncountable. The rifle can be seen in every media format imaginable.

While the information presented here is by no means a comprehensive history of the rifle nor its derivatives, it does provide rough outline of its iterative development and the impact it has had in popular culture. What began as a simple tank commander’s idea has likely had a greater impact on world history than any other single design. The rifle has helped shape the outcomes of military conflicts. It has had a monumental impact on our popular culture and is referenced in all forms of media. One thing is for sure: the AK is here to stay and its highly likely that AKs will still be fighting in wars and staring in mass media 100 years from now.