Algeria Protests: The Youth is Fed Up 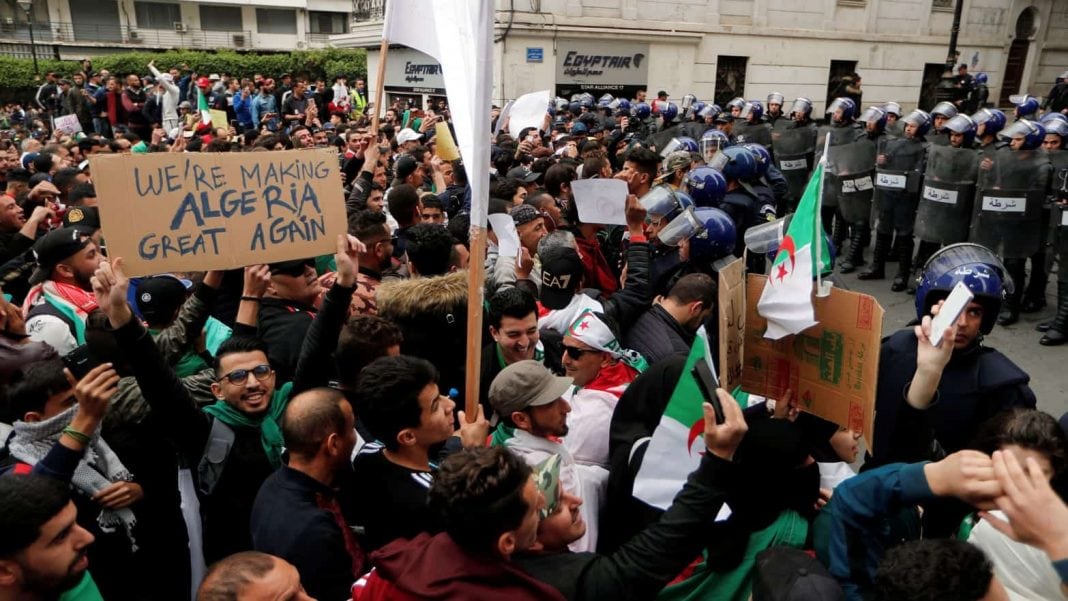 Algeria is witnessing the largest protests the country has seen in 20 years with reports of as much as 100 000 Algerians taking to the streets of the capital at its peak. These protests were sparked by Bouteflika’s bid for a fifth term. Bouteflika experienced great opposition and protests during the 2011-uprisings that swept the Arab world, in which the Algerian uprising was sparked by unemployment and food prices. Then, he managed to calm the protesters by lifting a 19-year-old state of emergency he had justified as a necessity to thwart terrorism and by social spending. This time around, however, he might have to give in to the demands and allow the people to elect their leader freely.

Whilst Algeria’s protests tend to mobilise the politically active, these protests have mobilised the youth assumed to be depoliticised. The movement seem to be focused on Bouteflika himself, rather than his politics.

Additionally, Algeria’s electoral law demands a medical certificate to ensure the people that their prospective leaders are fit to be their commander-in-chief. In 2013, Bouteflika had a stroke. The incident left him in a wheelchair and severely impacted his ability to speak. Since the stroke, he has barely been seen in public. In the 2014 elections, Bouteflika did no campaigning and no public speeches, yet won the election by a vast majority of the votes. The integrity of the election was questioned due to his lack of campaigning and questionable ability to rule, rooted in his medical issues. Today, Bouteflika has just turned 82, paralyzed by a stroke, just received treatment for weeks in Switzerland, and has not spoken publicly in seven years. Effectively, the notion that he considers himself above the law due to the impossibility that he has passed the very medical requirement which is supposed to ensure his ability to do the job.

His deteriorating health and opaqueness have also led to speculation if someone in his clique has been making decisions on his behalf. In 2015, the Algerian security apparatus was purged, jailing of army generals, change in the intelligence hierarchy, and laws preventing journalists and others to voice opinions against the regime. The sudden change made it clear that the political and military establishments were divided which in turn made people wonder who makes the decisions – An old sick man in a wheelchair or the people around him? That same question arises now – will it be Bouteflika or his clique that makes decisions? Others fear there has been a soft coup which has consolidated power within the family, which has led protesters emphasizing that their country is a republic, not a kingdom. Which remains to be seen now, if elections will be held or if power will be transitioned to someone from the inner circle without holding elections.

Previous under his rule, the regime has been able to maintain stability with the help of economic prosperity from sky-rocketing oil prices and by claiming the only alternative to its rule is chaos and civil war. None of which are effective anymore. The youth protesting is largely depoliticised as assumed, but they are not demonstrating against policies or party, they are demonstrating against Bouteflika for the sake of national identity. They do not want an old, sick, and incapable man to rule their country. They do not want his family, clique, nor his establishment to make decisions. They want an end to the gerontocracy, a president they can believe in, and a president to make decisions. Until elections have been held and the people have chosen a leader, the public will not be satisfied. Algeria is heading for a regime change because the new generation say so.