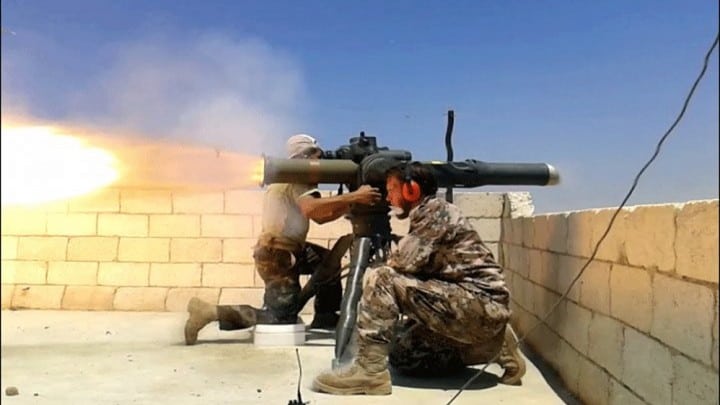 Anti-Tank Guided Missile (ATGM) is a classification of military hardware that has had a variety of models developed and used on the battlefield since the 1970s. Hughes Aircraft was the first company to get a production contract issued, but since 1997, the manufacturing of ATGM’s has been spearheaded by the United States (US) based conglomerate Raytheon Technologies Corporation.

Raytheon currently manufactures the BGM-71 Tube-launched, Optically-tracked, Wire-guided heavy anti-tank missile (known as a TOW system). Although the TOW is manufactured with the US military as the primary customer, the US Army states that the TOW system has been sold to over 43 allied nations during its lifespan.

Nonetheless, examining the nomenclature and capabilities of the modern model can present a general idea of the way others function. These following characteristics are derived from the M220 TOW system commonly used by US conventional fighting forces.

Apart from the standard military model, there are variants of both the system and missile munitions used in other countries and contracted paramilitary forces.

Into the Hands of the Enemy

Anti-Tank Guided Missile systems are advanced pieces of hardware and have generally been sold to and kept accountable by NATO partnered nations to the US (as the primary manufacturer). That is not monolithic, however, and there are some reports of ATGM systems being used by terrorist groups who are generally hostile to the West, and through logical inference would not be a likely candidate for US arms sales. For those actors to gain access to a system, they must go through different channels. Take Iran for instance.

According to Business Insider, the US supplied Iran with over 2,000 TOW missiles around 1986, a sale that was the pre-cursor to the historical Iran-Contra affair. Since that acquisition, Iran has managed to reverse-engineer the Raytheon model and develop their own. The Toophan-3 ATGM system is the most recent contemporary variation manufactured and used by Iran. A similar reverse engineering process has been utilized in Iran for other pieces of hardware which led to a continuously developing military-industrial complex that has the potential to skirt around sanctions and bolster Iranian interests abroad.

It may seem a bit abstract, but as mentioned earlier, there have been reported instances of ATGM systems used by terrorist groups in the last five years.

According to a comprehensive Bellingcat report, there is credible OSINT developed evidence to support the claim that various ATGM systems have been used by Syrian groups during their ongoing civil war. Within the data mentioned in the report, there are instances of international variations being used, such as the Russian 9M133 Kornet and 9K111 Fagot models. Nonetheless, in the year 2015, the Raytheon BGM-71 TOW system had the highest usage, by a very wide margin.

In 2017, there were significant drops in ATGM usage by Syrian groups, although the Raytheon BGM-71 TOW remained the prime contender. Some of the factions in Syria who have been reported as possessing American TOW systems are linked to Al-Qaeda, such as Hay’at Tahrir al-Sham (HTS) and ISIS. It is likely that the CIA is behind the introduction of the Raytheon TOW variant into the region through its reported arming of Syrian rebels throughout the duration of the conflict.

To circle back to Iran, its mentioned Toophan system has been used by the Yemeni Houthis, as reported by the Foundation for Defense of Democracies. In this conflict, Iran has sent military hardware to support the Houthi rebels throughout their battle against the internationally recognized Yemeni government. On the 28th of June 2020, US forces intercepted an Iranian vessel en-route to Yemen, and with a hefty stockpile of Iranian weapons. Included within the inventory were “several antitank missiles”, according to the Center for Strategic and International Studies. Due to the inclusion of those missiles, there is a realistic probability that the Houthi rebels already possessed a viable ATGM to fire them.

ATGM missiles are intended for use against armour (obviously), but a creative operator of the system can surely find alternative and less conventional uses for it. Although it is a more technical projectile system than say an RPG or makeshift launcher, a briefly trained terrorist using a TOW in a kinetic scenario is not outside the realm of possibility. Potential ways an ATGM can be used are against machine-gun nests, groups of ground personnel, or even as a method of assassination (key leaders, state figureheads, etc).

The size and requirements for its deployment realistically make it a weapon system better suited for a theatre like Syria, Yemen, or the recently rekindled Nagorno-Karabakh conflict between Azerbaijan and Armenia. Although it is possible to use it as an assassination tool, efficiency would require proper set conditions, such as time to set up without being spotted, and a proper range between the weapon and target.

It is highly likely that the variation in foreign variants of the Raytheon TOW model is in circulation in the global arms trade, particularly to terrorist groups who are unable to access sales due to terrorism status or sanctions. Uses of Anti-Tank Guided Missile systems in the Middle East has verified their availability, and intelligence sources and reporting has developed possibly leads to the origin of said weapons. It is likely that there will be the continued use of ATGM systems by terrorist groups, and likely that the systems will be used for operations outside of anti-armour.