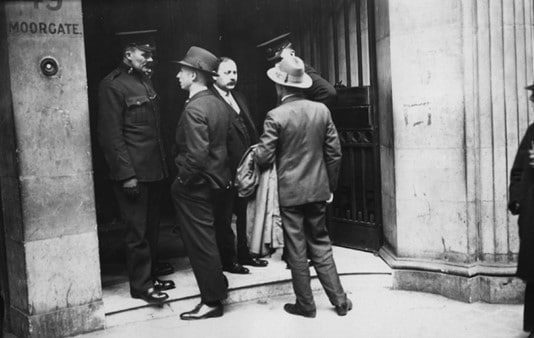 The ARCOS Raid of 1927 was the final straw that caused the formal termination of diplomatic relations between Britain and the USSR.

The All-Russian Co-operative Society (ARCOS) was established in June of 1920. ARCOS was the principal organisation for organising trade between Britain and the USSR. Headquartered in 49 Moorgate, London, the organisation was the London base for the USSR Trade Delegation within the UK.

On the 16th of March 1921, the USSR and Britain entered into an Anglo-Soviet Trade Agreement to strengthen economic ties between the two nations. However, the agreement also had extensive provisions aimed at peacekeeping and refraining from hostile activities.

The Secret Intelligence Service (SIS), Britain’s then primary National Intelligence Organisation, gained intelligence to suggest ARCOS held confidential British documents. This was due to a missing Air Raid Document that an unnamed but supposedly trustworthy source claimed was in the possession of an ARCOS employee.

Thus began the ARCOS Raid – Police officers, special forces, and interpreters raided the office of ARCOS Limited on the 12th of May 1927.

The raid ran for four days to the 16th of May 1927. However, the situation was exacerbated by Soviet unwillingness to cooperate. Russian authorities refused to allow British officers into locked safes. British authorities forcibly opened the safes regardless.

The ARCOS Raid is a particularly public example of a raid on a private company, causing heavy diplomatic consequences. Estimates suggest that authorities found up to 250,000 pieces of evidence to suggest that the Soviet Union were using the ARCOS headquarters as a base for subversive propaganda activities. However, the missing document was never found in Soviet possession.

The ARCOS Raid had been authorised by the British War Office, who had granted a warrant under the Official Secrets Act, that there was a likelihood that crime had been committed or was imminent.

British Authorities later published a white paper detailing their findings from the ARCOS Raid, arguing there was conclusive proof of the Soviet Union using ARCOS for subversive political activities.

The ARCOS Raid quickly became the subject of extensive political and legal debate.

The Soviet Union authorities claimed that the raid had been illegal under the 1921 Anglo-Soviet Trade Agreement. As such, they argued that the Russian Trade Delegation, based in 49 Moorgate, was subject to diplomatic immunity. This, they argued, rendered the raid unlawful.

Soviet Authorities who had been in the ARCOS headquarters at the time of the raid also claimed that British Authorities had planted evidence to incriminate them. The USSR Chargé d’Affaires, M. Rosengolz, described the ARCOS Raid as a British “declaration of war” against the USSR.

Despite overwhelming evidence of subversive activities in the ARCOS building, the Soviet Trade Delegation disregarded the entire ARCOS Raid as unlawful and any findings as staged.

Britain subsequently formally cut diplomatic ties with the Soviet Union on the 28th of May 1927, less than two weeks following the conclusion of the search.

The ARCOS Raid was significant in causing the breakdown of diplomacy between the USSR and Britain. Whilst the relationship between the two countries was turbulent before the incident, the ARCOS Raid was the final incident that caused both Britain and the USSR to feel justified in severing formal diplomatic relations.

Ultimately, both the British Authorities and the Soviet Union undertook covert and subversive activities surrounding ARCOS. However, neither admitted this, causing the highly turbulent relations that followed.