Barrack Busters: How the IRA influenced terrorists around the world 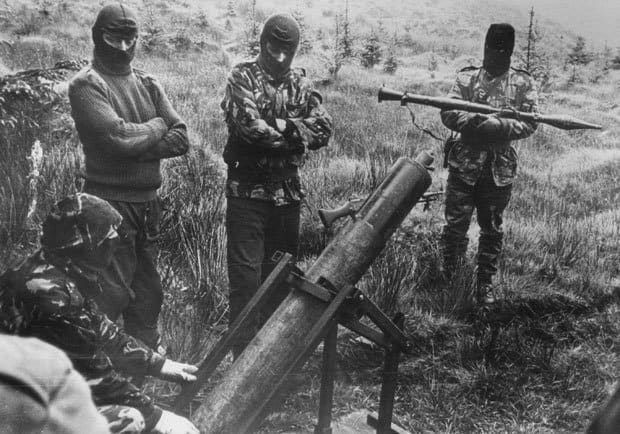 The Provisional IRA’s 29-year campaign, from 1969 until the Good Friday Agreements in 1998, saw the evolution of several tactics and technologies. It was developing world-leading knowledge in the use of Barrack Busters in urban environments as well as the development of bomb trigger mechanisms.

KJ–1. The Provisional IRAs development of the mortar directly influenced the type of operations that it was able to conduct. The use of the ‘Barrack Buster’ and others within the same technological family gave it the capability to strike directly against the military as well as the British government without a significant threat to its operatives.

KJ–3. The Development of both of these technologies influenced terror groups across the world. The Provisional IRA directly supplied the Revolutionary Armed Forces of Columbia (FARC) with bomb-making and Mortar knowledge for use in urban environments. IED technology developed by the Provisional IRA influenced its use in the Middle East.

Barrack Busters – Use of Mortars by the IRA

With the Provisional IRA conducting asymmetric warfare, mortars were a great choice of weaponry to develop. The use of a mortar was almost perfect tactic within its actions against police and military targets. Police stations and barracks had become almost mini fortresses during The Troubles, and previous tactics were not providing enough firepower.

One example was with the original use of the Spigot Grenade. These were shot either from a bow or a shotgun. A grenade was compromised of 2KG of blasting gelatin within a 15 cm metal pipe. Although imaginative, it isn’t easy to describe this practice as either practical or safe.

The development of mortars came with several tactical advantages to help the Provisional IRA:

Development of the mortar ran from the early 70s through to and during the ceasefire period of the 1990s. Going from the Spigot being fired from a Shotgun and the first true mortar ( the Flare mortar wasn’t deployment beyond the town of Derry. The Mk.15, developed in 1992, became known as the Barrack Buster. This variation was constructed out of commonly available materials such as modified gas cylinders used for cooking and heating. It had a 100-275m range, was 3M wide and had a diameter of 360MM.

Despite being made from household items, such as the Mk.15, the Barrack Busters were a potent offensive weapon, causing significant material and psychological damage throughout the Troubles.

The Mk.10 was further used in an attack against the British Cabinet itself. During a meeting discussing the Gulf War, three rounds from an Mk.10 in a van constructed just for this mission was launched against Number 10 Downing Street.

Two of the shells that were launched ended up being duds and were later made safe by security services. However, one shell hit a tree in the garden, causing windows within the Cabinet room to shatter. No.11 and 12 Downing Street were also severely damaged in the attack.

Three years later, the Provisional IRA launched an attack on three separate days in March of 1994. Three separate attacks of 4-5 Mk6 mortar shells were aimed at the Northern runway of Heathrow, as well as the Terminal Four building. At the time of the attack on Terminal Four, there were around 4,000 people inside. None of the shells during these attacks ended up exploding.

Although announcing the presence of the ‘Barrack Buster’ Mk.15 on the 5th of December 1992 in an attack against the Ballygawley RUC station in County Tyrone, the Mk.15 would obtain almost certainly its biggest success against a Lynx helicopter.

At around 20:30, Lynx 5 was hovering above Crossmaglen base carrying an underslung load as well one passenger. Hovering at 100 ft and the power being cut to the base, the Mk.15 hit the tail boom of the Lynx. Despite being engulfed in flames on the floor with its tail cut off, all crew and its passenger would survive and go on to make full recoveries.

The Provisional IRA had already established connection to FARC since 1998 and was in the region to teach the FARC rebels about explosives and Barrack Busters techniques to help with urban warfare. It is almost certain that the Provisional IRA received freedoms within the demilitarized zone to test its technology as well as obtaining cash from FARC.

The Provisional IRA were not only masters in the use of the mortar but had also developed novel trigger mechanisms for the use within IEDs. The term IED was first used by the British Army while dealing with planted explosives by the Provisional IRA.

The IEDs used were mainly constructed with Semtex (which was difficult to detect at the time) and fertilizer. However, despite the bombs were constructed of relatively simplistic components, the trigger mechanisms developed during this time were world-leading.

Explosive Ordinance Teams (EOD) Operatives had to deal with anti-handling devices. These included micro-switches and mercury tilt switches. With the use of these devices, should the IED be moved by the EODs, the IED would explode.

At the end of the 1970s and into the 1980s, the Provisional IRA would start using secondary devices within the IEDs. Within the Castlerobin device, as well as the anti-handling devices preventing the movement of a device, there were now anti-lift and anti-opening micro switches.

Through the capture and innovation on the EOD side, this would lead to even further innovation by the Provisional IRA to include electronics in its devices, as well as later developments in radio and light sensor trigger mechanisms.

Made in Northern Ireland

IED development has not stagnated, however, the Provisional IRA pioneered the modern use of the devices, Afghanistan experience further modern development. With EODs being able to detect bombs using metal and electronics, starting in 2010, bomb makers decided not to use these components in response. Relying on the blast damage rather than shrapnel and the use of graphite instead of metal in the triggers, bomb makers are slowly innovating away from Provisional IRA methods.

The Provisional IRA proved to be expert in the development of Barrack Busters and IED technology.  The use of Mortars within an Urban environment, such as the attack on Downing Street and Heathrow Airport, almost certainly influenced the connection between itself and FARC in Colombia and led to the spreading of the tactic to other terror groups. The Provisional IRAs development in IED technology also spread across the world. Tactics and technologies developed in Northern Ireland are still used in areas such as the Middle East. However, available technology has developed since the Provisional IRA were most active, and new technology is slowly replacing what was learned. Despite this, core principles and placement techniques are still being used.