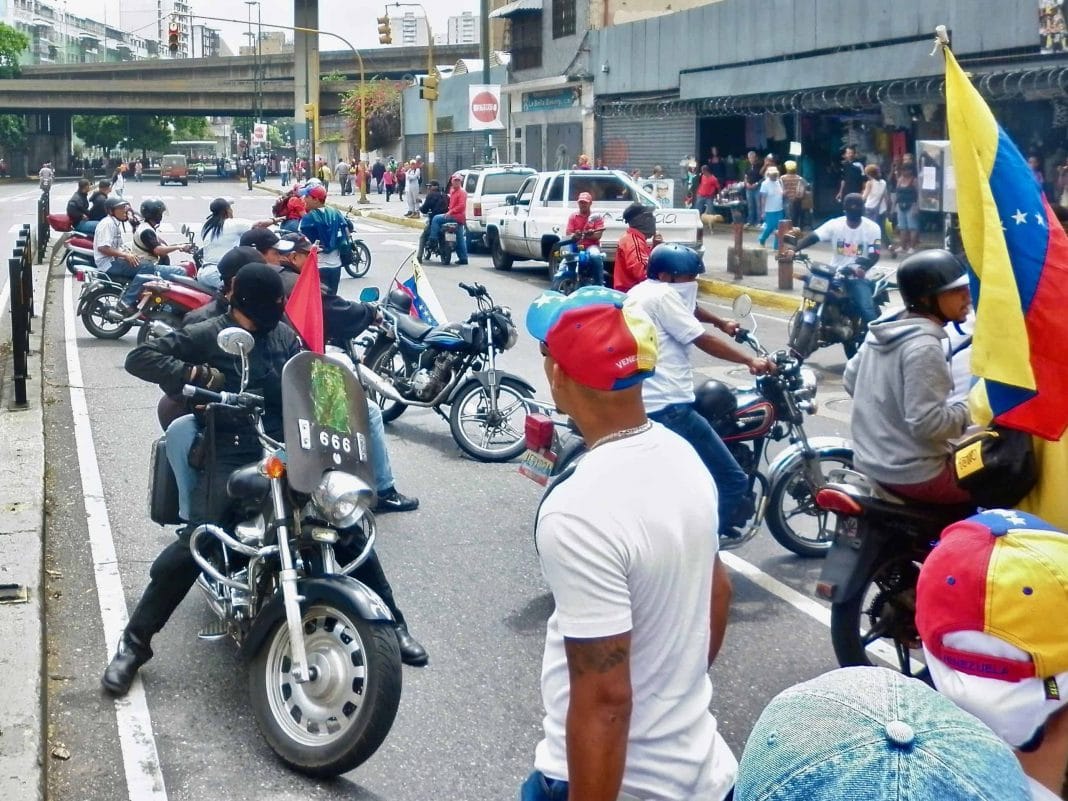 Why do Colectivos Matter?

The Colectivos are one of the paramilitary units employed by the Chavista regime to minimise any realistic threat from the opposition. The methodology of support changes, whether its supressing protests or aiding what are almost certainly fraudulent electoral processes. Nevertheless, the criminal nature of Colectivos remains in line with other non-state actors used by Maduro and Chavez as ideological, political and paramilitary bodies.

Intimidating and targeting protesters in 2017 and 2019 eclipsed the nature of the paramilitary body. Colectivos have the capability to force policy changes as seen in 2014 with the dismissal of the then-interior minister Miguel Rodriguez Torres. Recently, Maduro used the mass exodus of exiled Venezuelans to use empty infrastructure and grant it to paramilitary bodies. The government continues to depend at least to a limited degree on armed actors to carry out kinetic or aggressive action.

The policy of criminals self-administering districts in Caracas is under threat due to criminal expansion. The conflicts between Megabandas and government forces in Caracas highlight the weakness of criminal negotiations which ultimately depend on voluntary cooperation. Colectivos enforced COVID quarantine measures and maintained the flow of illicit revenue on the Colombian border. Meanwhile, clashes emerged over gas station control in Caracas with the armed forces. Interests between armed forces, the government and colectivos are likely to continue to conflict.

The Chavista paramilitary tools likely enjoy a presence in the 23 states in Venezuela, with a confirmed presence in 16 out of 23 states in 2018 and 2019. On average, Colectivos are structured by hundreds of members unofficially led by specific individuals. Nevertheless, the proliferation of criminality makes it highly inefficient to number the individual members in all groups in Venezuela.

Financial and material funding continues to lean towards illicit sources of revenue. Initially, the government provided financial support as well as weapons like AR-15’s, AK-47’s, sub-machine guns, and individual firearms. The delicate economic environment increases the role of a criminal economy to sustain activities. Similar to Megabandas, Colectivos exploit and extort communities trafficking with narcotics, food, or medicine. In 2021, Maduro granted groups privately-owned infrastructure, including homes, as means of payment.

Intimidatory actions and anonymity drive the actions of Colectivos to support the state. Using balaclavas and facial disguises, members prevent facial recognition. Additionally, the anonymity factor is used to intimidate protesters and voters. Armed gunmen on motorbikes, a common practice throughout protests, are significantly associated as a symbolic method of repression and intimidation.

Not all groups are armed, as some use social welfare and ideology to drive activities, appearing as grassroots organisations. There is nevertheless a common mission across all groups in defending ‘Bolivarian unity’, or the specific policies instructed by the Maduro regime.

The anonymous factor of groups makes it almost certain that no governmental recognition will arrive. Nevertheless, the little efforts made to shield the role of Colectivos likely serve an intimidatory purpose. To an extent, the paramilitary groups act as a symbolic resource that the government uses at its will. Under the surveillance of the Chavista regime; FARC, ELN, and Wagner reportedly provided military training to groups in Táchira. Regardless, depending on and increasing capabilities of paramilitaries increases the long-term risks of subversive activities.

There is a very likely fear of criminal subversion gaining momentum in Venezuela. FARC rebels in Apure contested FAES, GNB and Wagner operators from March to May. In Caracas, the fragility of the pax mafiosa agreements with megabandas emerged after an attempt of criminal expansion by El Koki. Criminal competency is forcing the regime to use armed interventions to avoid any subversion gaining momentum. Meanwhile, interventions have limited success, with a death toll of 8 SOF operators and 4 kidnapped in Apure. In Caracas, megabandas exploit the natural advantage in neighbourhoods to carry out surveillance and insurgent warfare. Maduro is only relatively successful in challenging the criminal actors propped up to defend the regime. Colectivos are likely to be treated as potential threats instead of allies.