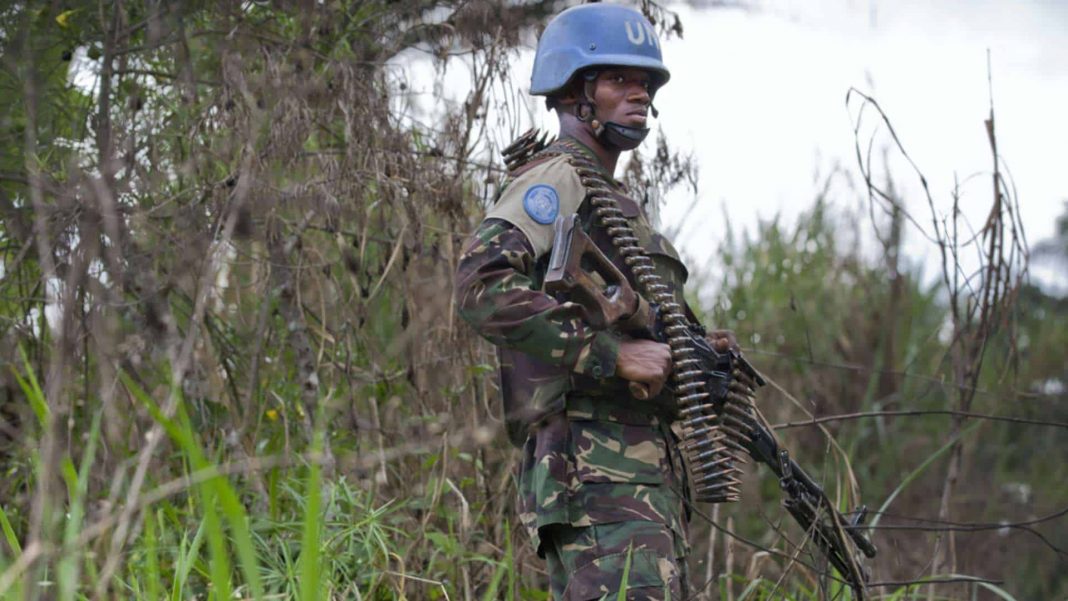 COVID-19 has likely not impacted the running of the MONUSCO mission in the DRC in a significant way presently.

KJ-1. Previous logistical chains created for reacting to the previous Ebola epidemic will likely mean MONUSCO has a realistic probability to deploy countermeasures that will not interfere in its current mission objectives.

KJ-2. MONUSCO has almost certainly failed in its mission of protecting civilians from violence before COVID-19 impacted the country.

KJ-3. MONUSCO almost certainly faces a tough upcoming 12 months. With budgetary concerns and a mistrusting public due to a checkered history, COVID-19 will almost certainly interfere in operations through non-humanitarian ways.

The UN has had an active presence in the Democratic Republic of the Congo (DRC) since 1999. Following 1.2 million Hutus from Rwanda fleeing the 1994 genocide to the East of the DRC. Following a 1997 civil war in which Rwanda and Uganda supported the rebels, and a later 1998 rebellion originating in the Kivu regions, the Lukasa Ceasefire Agreement was signed in July of 1999. UN resolution 1279 followed the signing on the 30thof November 1999, creating the United Nations Organization Mission in the Democratic Republic of the Congo (MONUC). This was made for the primary purpose of observing the ceasefire in the region.

Following the first free election in 46 years on the 30th of July 2006, and the subsequent run-off vote for the presidency on the 29th October 2006, Joseph Kabila was elected despite legal challenges. MONUC would stay in the region to observe peacekeeping and political rule in the country due to ongoing clashes in provinces around the DRC. MONUC would reach peak operational capacity to observe the 2006 elections with 16,000 personnel in the region.

MONUC would be renamed as the United Nations Organization Stabilization Mission in the Democratic Republic of the Congo (MONUSCO) on the 1st of July 2010 according to resolution 1925. This was due to a rededication of the forces’ mission focus. While it would continue the previous mission of observing legal rule in the country, it would also compromise:

sMONUSCO would be able to reconfigure the complexation of forces if the situation in the country changed. While MONUSCO has brought a sense of stability to regions in the majority of the country, the Eastern regions still continue to suffer from major conflict. This includes:

MONUSCO, in both its current and MONUC variation, has cost approximately $8.7billion since 1999.

ADF, Militias and the Eastern Regions

The majority of violence seen in the DRC takes place in the East of the country. The country has 70 armed groups, and the majority of these are located in this region. The bulk of the groups are made up of less than 200 armed members, and all have different regional and national objectives. However, the chaos that they spread in the East, particularly in the North and South Kivu regions, are disproportionate to the size of the groups. The Kivu region is on the border of Burundi, Rwanda, Tanzania and Uganda. The regions cover an area that is 67,000 square km.

The primary opponent that MONUSCO faces is the Allied Democratic Forces (ADF). Initially a Ugandan rebel group, it has maintained bases in the Eastern regions of the DRC since the 1990s. Incorporated into the United States Terrorist Exclusion List in 2001, they were thought to have been reduced to a second-tier organisation following a large engagement in the DRC during 2008. They made a comeback in 2013, and the Government in Uganda believes that the group is connected to al-Shabaab. Its main base is in Beni, North Kivu. The leader and founder of the ADF, Jamil Mukulu, was arrested on terrorism charges in 2015.

The most recent UN Security Council resolution regarding MONUSCO, 2502, on the 19th of December 2019 states that the mission’s role is to: “to provide effective, dynamic and integrated protection for civilians at risk of physical violence as part of a comprehensive approach, including deterring and preventing all armed groups and local militias from committing violence against the population or by intervening to stop it, in consultation with local communities.”

However, attacks in recent years indicate MONUSCO has been failing to achieve these targets. The ADF has stepped up its attacks after remerging in 2013. As covered in a recent report by Grey Dynamics, there have been:

To combat violence seen in the East of the DRC, a significant operation took place in the region on the 31st of October 2019. The Armed Forces of the DRC (FARDC) launched two operations, SUKOLA 1 and 2. MONUSCO supported this operation in the form of logistics. Fuel, food, intelligence, troop transport and medical evacuations made up the MONUSCO contribution.

It is hard to say that MONUSCO has been successful in its mission in the DRC. With thousands of people caught in the violence seen in the Eastern provinces, corruption and crime cripple the MONUSCO mission. During February 2015 the 17,000 UN peacekeepers were suspended from any collaboration with the FARDC. With suspected human rights abusers promoted to lead a joint command operation, the UN was unwilling to work with the local security ever since there has been only limited cooperation while fighting the ADF.

Without a combined force to prevent violence from continuing and spreading in the East, it is almost certainly a losing battle for MONUSCO to continue in the way they are operating. Without local intelligence, it will almost certainly add years onto the peacebuilding operating in the DRC.

The strategy of the UN during peacekeeping operations is also at loggerheads with the situation on the ground. DRC Conflict specialist Severine Autesserre has described the UN mission as taking an international approach to a local problem, while also thinking of the DRC as in a post-conflict period. As seen in attacks over the past four years, there has been an ever-present violent presence in the East. Many of these groups’ activities are connected to local tribes and land disputes instead of a pure civil rebellion against the government. The UN so far has almost certainly failed at tackling the route cause of the majority of violence in the region.

The DRC so far has reported 10,292 cases of COVID-19 at the time of writing along with 260 confirmed deaths. While numbers need to be taken with a pinch of salt given the lack of access to rural areas and other factors, the MONUSCO mission has had to alter its activities in the region to react to the pandemic.

MONUSCO has been building Quarantine facilities in Northern Kivu to help limit the spread of COVID-19. This is being done in the hope of increasing the number of resources available to the mission so as not to take away from security resources.

The government has diverted resources and focused its attention on the pandemic. However, the violence has not only carried on in the East but instead has risen. It is, in part, highly likely due to the government’s inability to focus. With the pandemic and violence, recovery is still ongoing from the second-worst Ebola outbreak in history. It was confirmed as being over only in June of 2020.

COVID-19 has likely not impacted the running of the MONUSCO mission in the DRC in a significant way presently. Although the DRC is only just recovering from the second-worst Ebola outbreak in history, some procedures and practices should be learned from this epidemic. However, COVID-19 will likely exacerbate the current security situation.

The United Nations Police (UNPOL), an element of MONUSCO, already has experience in reacting to an epidemic. These forces have already set up health services along with security in rural areas in the DRC to protect against the Ebola outbreak. With this, the logistics framework of such a mission to combat a pandemic already exists. Lessons learned from the ebola outbreak will mean there’s a realistic probability the UN can quickly deploy known measures to stop the spread of the virus.

However, more needs to be done to combat a likely further increase in infections in the DRC. With only 5% of roads usable within the DRC network, the virus will highly likely take time to spread throughout the entire country. When it does spread, however, it is almost certain that it will be around for longer. To combat this, the UN must work with the local community to set up outreach programs. With private food banks already active, it would be advisable for MONUSCO to work with these community efforts.

Not only would this increase outreach and achieve the local level response that is needed as explored in sections 2-2, but it would build up trust within the community. As analysed in a Grey Dynamics report, there is mass distrust within the community of both the UN and FARDC. Only 21% of respondents in a recent survey by peacebuildingdata.org feel confident about the government’s peacebuilding efforts.  Without a build-up of confidence in the community, the time it takes to treat a COVID-19 outbreak along with the security situation will almost certainly increase.

COVID-19 has not suspended violence in the East. Suspected members of the ADF attacked a MONUSCO convoy on the 22nd of June that killed an Indonesian peacekeeper while wounding another in North Kivu.  In South Kivu, community conflicts have deteriorated, and 100 civilians have been killed in clashes in Tanganyika province.

Previous experience with the Ebola outbreak has put the MONUSCO mission in a good position to prevent further COVID-19 outbreaks. Despite this, they have struggled to contain the security situation. The continuation of community violence shows an almost inevitable worsening of the previous problem of misunderstanding the local issues surrounding violence in the DRC.

Within the next twelve months, it is highly likely that MONUSCO will suffer a diminishment capacity, and the risk to civilians will remain high. With MONUSCOs budget cut to $1 billion, a reduction of a third since 2016 due to the United States cutting contributions (and is already late on previous payments), it’s almost certainly a reduction in forces on the ground. While trying to prevent a COVID-19 outbreak, the economic recession from this will almost certainly also reduce the budget, and therefore human resources.

With this reduction in workforce and budget, MONUSCO will almost certainly not be able to carry on its activities and policies in the region. With a questionable history of success in the area, MONUSCO is in a weak position to carry on its objectives in the DRC. With an already distrusting public, who will likely lose even more trust with a limited withdrawal of UN troops, this will almost certainly lead to an increase in risk for locals and more instability in the region within the next 12 months.