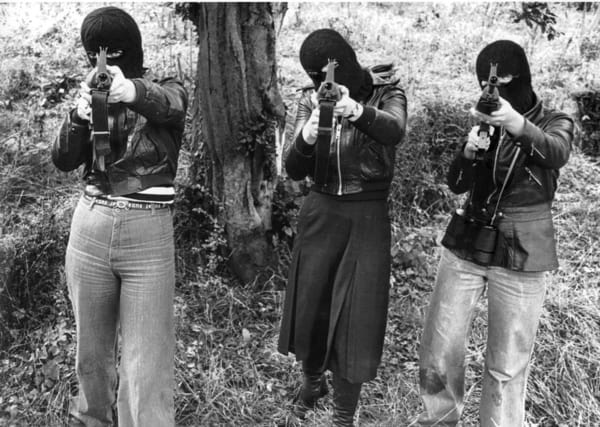 Cumann na mBan was founded in 1914 in Dublin, and is sometimes called ‘The Women’s League’ in English. The organisation, which is explicitly feminist and Irish Republican, aims to assist with the establishment of an Independent Irish Republic. Following its establishment, the group’s first official meeting was held on the 2nd of April 1914, wherein a constitution was drafted. This allowed for the beginning of their organised work.

The group expanded quickly, in part to President Agnes O’Farrelly, a well-known and respected Irish Language academic [source]. By 1916, the group operated 43 affiliated branches of the Cumann na mBan operating in Ireland, including three in Dublin alone [source].

Cumann na mBann is a paramilitary organisation willing to use force as necessary to achieve its strategic aims. Within the Cumann na mBan constitution, there is explicit reference to the use of force to advance the cause of Irish liberty and to organise Irish women to the furtherance of this object, and assist in arming and equipping a body of Irish men for the defence of Ireland [source].

Up to the Easter Rising, women were confined to administerial and housekeeping duties as part of the Republican effort; cooking, messaging, and first aid [source]. As a result, the group regularly faced critisism from feminist critics as to the empowerment the group offered women. Although Cumann na mBan had several leaders that were formerly active suffragists, many suffragists dismissed the organisation completely. Founder of the Women’s Irish League, Hanna Sheehy-Skeffington, famously described Cumann na mBan as “a collecting box for men,” and its existence was normalising the idea of women serving under men [source].

The debate of the role of Cumann na mBan continued through most of its history. However, following the 1916 rising, the group took on a far more active military role.

Although few of these women had a hands-on role in combat, the women did have a significant part to play within the war effort. By 1916, over 70 members were arrested due to the assistance they offered to the Irish Volunteers [source].

Cumann na mBan had a dedicated propaganda arm, aimed to further the Irish Republican cause. Accordingly, the organisation regularly produced pamphlets, reports, and newspapers furthering their cause.

Whilst still a feminist organisation, the group also published extensive literature following the Representation of People Act 1918, which allowed women the right to vote. As a result, regional branches published much material to provide women with instructions on how to register and exercise their right to vote [source].

Cumann na mBan is active as a group to present. The group celebrated its centenary in 2014, with a plaque unveiled at Wynn’s Hotel in Dublin – the location of the inaugural meeting in April 1914 [source]. However, it is a proscribed terrorist organisation in the United Kingdom due to its continued support of separatist militant republican groups [source].

Cumann na mBan was instrumental in Irish Republican successes prior to and following the Easter Rising of 1916. Though the debate remains as to the status of the organisation, it is undeniable that the group offered vital support to Irish Republican organisations throughout its history.