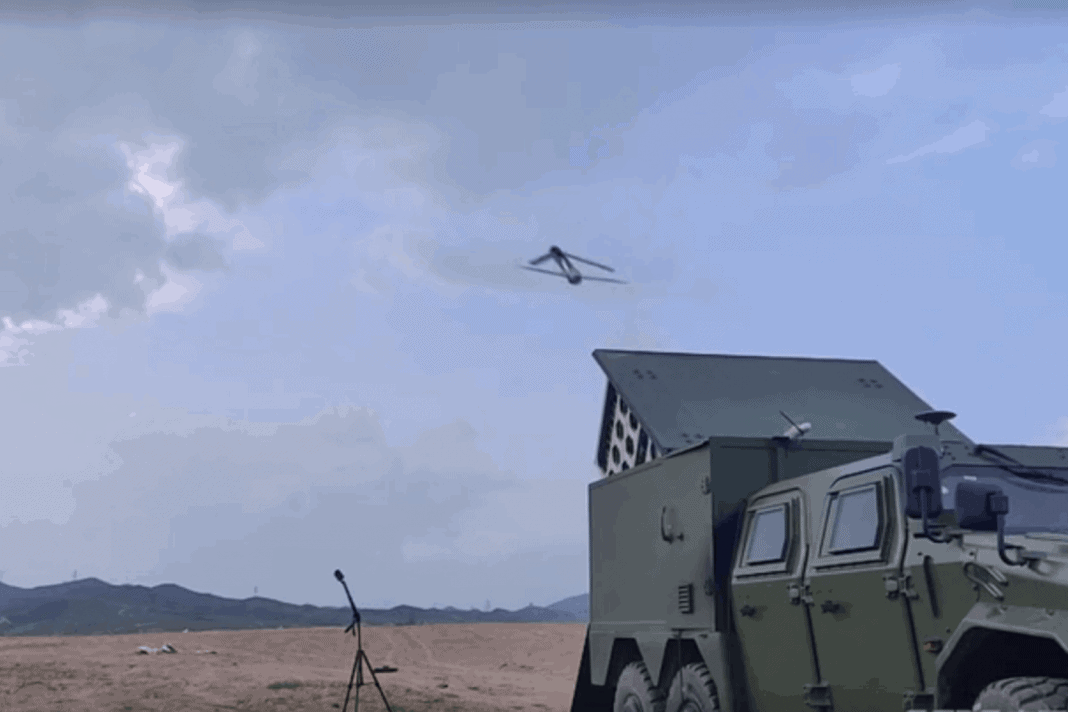 A recent video released by the China Electronics Technology Group Corporation (CETC) has raised the profile of the use of drone swarms and Loitering munitions in future combat applications. Although it is appropriate to be sceptical of footage released by the Chinese government concerning these technological showcases, it is a topic that is becoming increasingly prevalent in contemporary conflict.

KJ–1. China has showcased ‘suicide drones’ (Loitering Munitions) in recent video releases. There have also been notable uses of loitering munitions in the Nagorno-Karabakh conflict between Azerbaijan and Armenia.

KJ–3. Smart swarm technology is likely still decades away from adoption. However, we will likely see ‘dumb’ swarms being shown and used within the decade.

Loitering munitions have been used in the Nagorno-Karabakh conflict between Armenia and Azerbaijan. Azerbaijani officials have confirmed the use of Israeli made IAI Harop drones in the region in “kamikaze” tactics, achieving “very effective” results. We will likely see an increase in the use of cheap, disposable drones in future conflicts.

In an interview with Grey Dynamics, Maaike Verbruggen, a Doctoral Researcher at Institute for European Studies in Brussels specialising in Emerging Military Technologies, Military Innovation, and Arms Control, expressed the appeal of these drones for smaller countries:

“the smaller [drones] that…you can put in your backpack… then there are the larger ones, like the Harop … is also quite mobile because you can launch them from these canisters, which makes them quite mobile … you [don’t] need a runway, et cetera … it means that you can use them without extensive infrastructure … you don’t need to have extensive training as well for pilots. This makes them quite attractive for a relatively small country like Azerbaijan.”

In September of 2020, the China Academy of Electronics and Information Technology (CAEIT), a subsidiary under the state-owned CETC, tested a swarm of loitering munitions, referred to commonly as ‘suicide drones’. The video showcases drones that are tube-launched from a land-based vehicle, as well as being launched mid-air by helicopter.

As noted by The Warzone, the UAVs look similar to recent versions of China‘s CH-901 loitering munitions. The CH-901 has:

Despite this perceived leap in technology for the Chinese military, it is likely that this is still a swarm that is coordinated for an attack on one target at the same time. In our interview with Maaike Verbruggen, she mentioned that even with these types of attacks existing, ‘drone swarms’ very likely do not exist at present to the extent of a potential battlefield application.

‘Smart’ swarms, with communication occurring between the AI in each drone within it, like a school of fish, are still at a very early stage. Although recognising the importance of the development of these coordinated attacks, it would be wise to remain sceptical of the sophistication that is being shown.

Developments in Other Countries

There is a global interest in drones, AI and the swarming capability possible from the development of these technologies. However, during our interview with Maaike Verbruggen, it was mentioned that although drone development is often portrayed as a US, China and sometimes European competition, there has been global investment within this industry. With Israel in 2019 considered a top 3 country in terms of drone exports, other countries such as Turkey and India have started indigenous local defence manufacturing. Especially in the case of Turkey, this has created a trend that is seeing drone exports become a more diverse market in terms of drone origins.

Turkey has been producing traditional drones in the form of the Bayraktar TB2. They have also started to produce swarming loitering munitions, developing the Kargu-2. As a loitering munition, it has impressive specifications.

This development is in line with a prioritisation of the domestic defence industry to reduce imports and military dependence from countries such as the United States and Israel. The Turkish military inventory of the more traditional style Bayraktar TB2 more than doubled between 2017 and the end of 2019, from 38 to 94. With this increase, Turkey has also sought to export its domestic drone, selling the TB2 to:

Azerbaijan has also recently admitted that it has been using Turkish drones in the conflict between Armenia.

India has been making a push to create more of its military inventory domestically. Importing 70% of defence equipment is making indigenisation a key government target for its defence industry. This move will likely lead to a saving on cost in the long-term as well as being able to be more agile in reacting to new threats. The Make In India campaign launched in 2014 is a key factor in this push.

With this push for domestic production, India has started to develop its swarming technology for drones. The state-owned Hindustan Aeronautics Ltd company, along with NewSpace Research and Technologies are developing the ‘Air-Launched Flexible Asset (SWARM)’ (ALFA-S). The design consists of:

Several assets can be loaded into tube launchers and will be carried by traditional human-crewed aircraft. These drones are designed to be launched outside the range of enemy aircraft and missiles, after which the swarm will head to a target. ALFA-S will be designed so that it could fit Indian fighter aircraft as well as transports.

Within our interview with Maaike Verbruggen, it was pointed out that our idea of swarms at present is not what would be considered ‘drone swarms’ within robotics. Despite the ability to fly in formation and head to a single target, the ability to communicate complex information between the AI in each individual in the swarm has not yet been knowingly achieved. Despite the usage of ‘swarm’ in common terminology, it should likely be considered a ‘dumb’ swarm at this point.

Despite the developments currently being showcased in drone warfare, it is likely we are still a decade at least from smart swarms being a feature of the battlefield. Although a great addition to the battlefield, the technology will not take over the role of a tank on the battlefield, and rather will highly likely represent a doctrinal shift.

An example of this technology that will shift the ability of soldiers to better defend themselves from small arms on the battlefield is the FireFly. While only possessing a 400g warhead, it gives soldiers the ability to remove sniper and entrenched machinegun threats, for example. Instead of waiting for a 20KG payload from a traditional overhead UAV, this type of loitering munition gives soldiers greater flexibility on the battleground.

However, smaller munitions such as the FireFly can present a problem if non-state actors can procure or manufacture similar technology. In our interview with Maaike Verbruggen, backpack launched drones that soldiers can take into a mission themselves would likely be accessible to non-state actors. However, larger drones such as anti-radiation variations (IAI Harop as an example) will highly likely not end up in the hands of non-state actors organically. Despite this, the destruction that would be caused even with a 400g warhead in a built-up civilian setting would highly likely be catastrophic.

Another use we could see in the use of drones in a ‘smart swarm’ would be in Urban environments in mapping technology. Maaike brings up the scenario in which sensor drones can be deployed within this type of environment and created 3D maps of buildings, including the interiors.

The demonstration of swarm style loitering munitions by the CETC should be considered an important development. Along with the established powers in China and the United States, there is also a growing market in rising regional powers such as Turkey. We will almost certainly see loitering munitions develop and see widespread use in the next decade. However, despite the advancements we are witnessing, true ‘smart’ swarms will likely not be in general operation in the next decade, despite the common terminology one might see in mainstream news headlines.