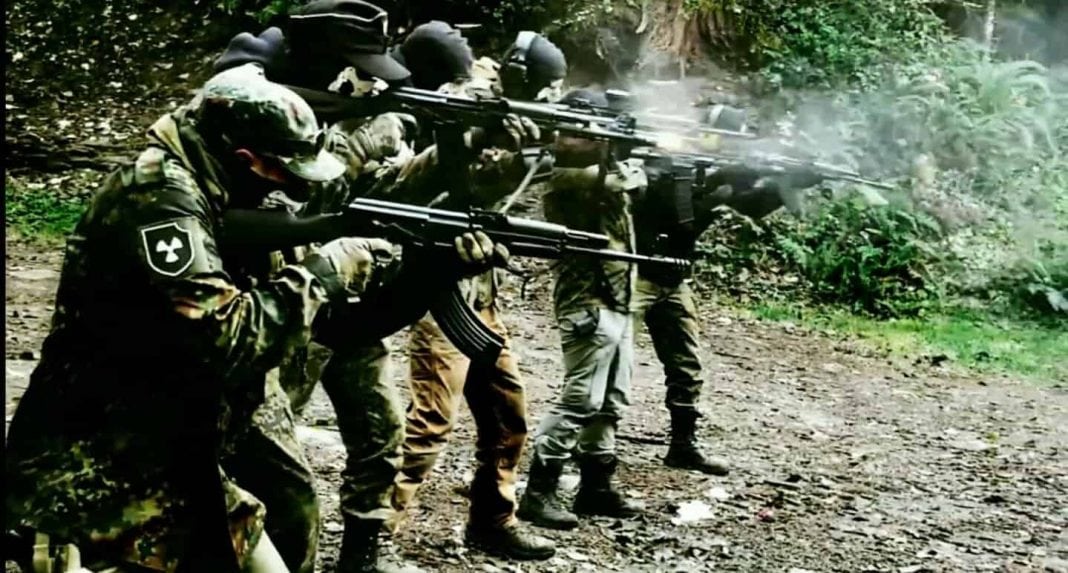 There is no fixed organisation leading a movement capable of joining European far-right radicalised networks across different countries. Despite the abstract nature of the threat, far-right extremism has the potential to grow into a capable threat.

KJ-1. It is highly unlikely that any large European far-right armed terrorist group will emerge in the following 6 months. There is an increase in activity and established organisations, yet the lack of a centralised idea and an increase in opposition highly likely to prevent a joint-pool of recruitment.

KJ-2. Online individual radicalisation is likely going to increase in the following 12 months. The abstract nature of the ideology together with the psychological need to project responsibility in the midst of a social, economic, political and security crisis will likely increase the activity and recruitment in online far-right communities.

KJ-3. Although a sequence of attacks is unlikely, this would likely project tolerance by law enforcement or capability by individual actors, creating a domino effect within radicalised communities. The risk of uncontrolled growth in voluntary violent actions will likely establish a fixed far-right radicalised community that would be prone to violence.

Europe reported 11 failed and 4 successful attacks in 2019. The 4 completed attacks occurred in Germany (2), UK (1) and Norway (1). In July 2020, the 2nd division of the Kommando Spezialkräfte (Special Command; KSK) of Germany was dismantled, due to the soldiers’ involvement with Neo-Nazi communities and possession of firearms and explosives for personal purposes. Although arrests decreased from 44 in 2018 to 21 in 2019, three large organisations have been arrested this year in Germany, the latest on the 11th of November.

Political polarisation and the rise of a right-wing ideology in Europe has partly fuelled these sentiments. The pandemic, an increased threat of individual terrorist attacks and the inability of law enforcement to completely deter this threat has likely pushed individuals to radicalise into far-right networks.

Profile of the Movement

Although the European far-right lacks a clear structure, it is likely that individuals carry out attacks, knifed or armed with guns, in the following 12 months. The structure of the movement is horizontal, organisations in each country may communicate with each other in online communities but there is no formal or informal relationship amongst groups. In consequence, individuals are still likely to be radicalised without group support increasing the likelihood of an individual attacker.

Groups adopt ideologies which adhere to strict identity values yet there is a lack of uniformity across ideologies in different regions and nations. Ideologies range from Neo-Nazism to a rejection of a perceived multicultural invasion of Europe and the loss of European values. The Nordic Resistance Movement (NRM) is a Scandinavian based group aiming to restore a utopic idea of the Nordic race across all countries, leaning towards race-based propaganda and a particular aim against the Jewish population.

The Identity Generation (GI) is a French youth organisation stemming from the Identity Movement, an ideology which perceives a cultural threat under Europe and rejects all progressive policies as a result, particularly the presence of Muslim individuals and Islam as a religion within European culture. There is a common pattern of blame within far-right groups against a particular group to place responsibility for perceived failed systems.

This pattern is also seen in Italy as groups like Casa Pound and Forza Nuova targeted left-wing targets, the Lega Norte coalition has incited attacks against minorities and different ethnicities. The lack of uniformity in the ideas followed makes it unlikely that groups will openly cooperate but instead limit to online support and acknowledgement.

Despite the GI attracting 5,000 members to its Telegram community and 2,000 active members in 2016 in France, the presence of transnational groups like the Atom-Waffe Division (AWD) in Germany and the UK contribute to the momentum of the ideology. Groups like these are present in Spain, Portugal or Denmark with a low-recruitment capability. Considering that attacks and arrests majorly occurred in countries where far-right presence is higher, it is likely that only a few actors play active roles within the community.

Considering the nature of attacks like Norway or Halle, individuals using firearms target symbolic infrastructures like religious centres or cultural attraction spots. It is unrealistic to consider that primitive attacks despite the weaponry are supported in any technical or material way by different European organisations.

It is likely that the combination of the environment in Europe and the content of radicalisation has contributed to the radicalisation of individuals. Within particular ideologies of the movement, the replacement of the ‘European race’ with a multi-cultural community is being targeted through policies and policy-makers. Cultural values are being targeted, triggering an identity defence mechanism.

By probability, a share of individuals will feel represented by the European far-right, creating a reciprocal effect inciting recruitment within far-right organisations, whether in the nature of the GI or the nature of the NRM. The nature of the cause makes it almost certain that law-enforcement efforts to prevent radicalisation and reduce violence will be interpreted as cooperative behaviour with rejected parties. In turn, this will likely deter cooperation between far-right organisations and law enforcement and increase the likelihood of an attack.

The failure of law enforcement to prevent terrorist threats from having an effect on the population also likely contributes to triggering defence mechanisms. The rise in identity politics in Italy, Austria, Spain, Germany, Hungary and France has provided a method to legitimise the cause. It is almost impossible that the origin of the trigger is only caused by a rise in identity politics, terrorist threats or cognitive radicalisation procedures.

The nature of the ideology and movement is reactive, making it prone to online radicalisation which makes it likely that websites and online overt platforms like the webpage of Generation Identitaire will increase. While groups like NRM and EU-based AWD will remain at the same figure and their threat will highly likely continue to be present, a social-based movement is likely being targeted similar to the GI model.