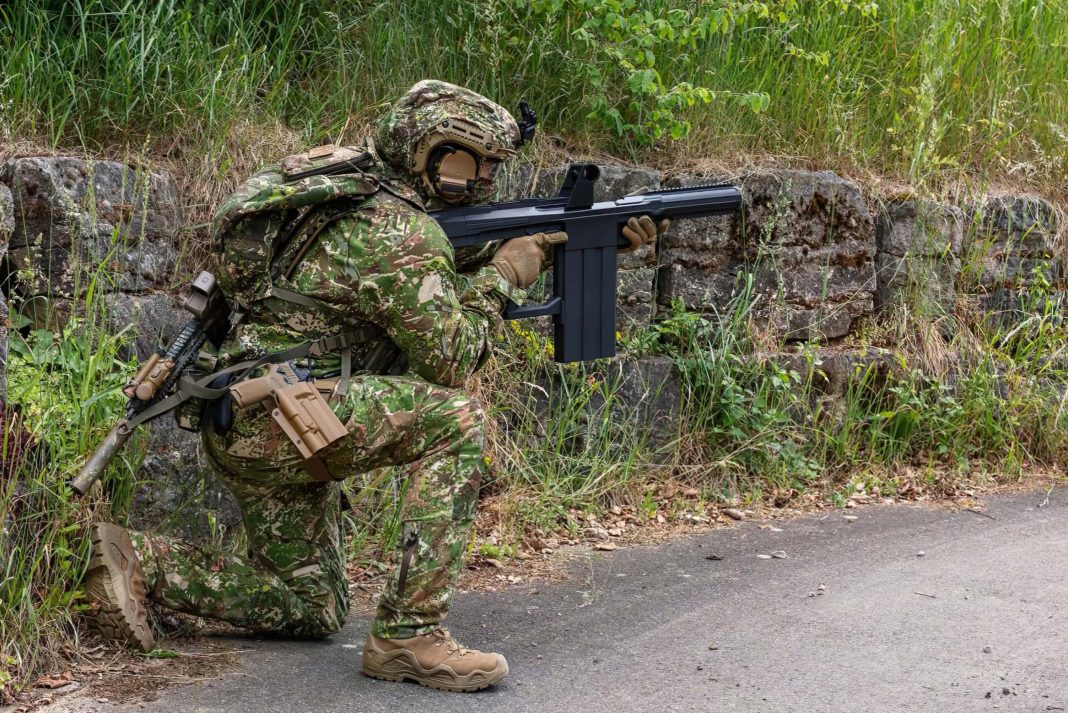 Grenade launchers are individual operated support weapons intended to assist the infantry while assaulting. Typically, grenade launchers fire explosive projectiles but fire a variety of loads such as smoke, flares, or even ballistic projectiles. Grenade launchers are used by soldiers known as grenadiers. The grenadier’s job is typically to engage targets such as vehicles, machine gun nests, and enemies in “dead space”. Dead space can be any area where you don’t know exactly what’s behind it but there’s a high probability its someone who wants to kill you.

Today almost all NATO countries use one of the launchers mentioned in this list and they all fire some form of 40mm projectiles. The grenades fired from a grenadier’s launcher are usually low velocity which limit the range to around 400m. High explosive grenades require the grenade to travel around 14-28m before the grenade arms. This ensures that if the grenade won’t kill the user if they severely blow their shot.

Grenade launchers are technically an indirect fire weapon. This means that you don’t aim it the same way you aim a rifle. Using a tangent or ladder-style sight, the user adjusts the angle of the barrel in relation to the ground to alter its trajectory. The steeper the angle, the longer the range. This has a bit of a learning curve at first, but an experienced grenadier can engage targets based on feel alone. While on paper grenade launchers are an indirect fire weapon, a 40mm projectile moving at 78–84 m/s can have devastating effects even without detonating.

The Squad Support Weapon 40 (SSW 40) – Automatic Grenade Launcher (AGL) is a new semiautomatic grenade launcher. Rheinmetall, a German military weapons company is manufacturing the SSW 40. The SSW 40 was unveiled at Eurosatory 2022 and will be available for delivery in 2023. The weapon is an evolution of the Hydra AGL which was a collaboration between Rheinmetall and Milkor.

The SSW 40 feeds from box magazines and utilizes a recoil-reducing mechanism to tame the recoil from 40mm grenades. Additionally, the semiautomatic mechanism allows for the SSW40 to fire medium velocity grenades. This significantly increases the maximum effective range compared to older designs. It incorporates MIL-STD 1913 rails which allow for the mounting of optics and other force multipliers. Rheinmetall designed the launcher to be about the same size and weight as a standard infantry rifle. (Source, Source)

Originally, grenadiers used rifle grenades, a special explosive projectile that was affixed to the muzzle of a rifle. Standard ammunition would be removed from the rifle and a high-pressure blank cartridge would launch it. Rifles that utilized a gas operating system would require a gas port shut-off mechanism. This ensures that all the gas from the blank cartridge is used to launch the rifle grenade rather than cycle the rifle. For example, Yugoslavian AKs have a built-in grenade launcher sight that also acted as a gas shut-off when the sight was employed.

Eventually, stand-alone grenade launchers began to be developed. One of the first was the US-made Vietnam War era M79 grenade launcher. The M79 fired the now NATO standardized 40mm low-velocity cartridge. These developments allowed the grenadier to provide much greater firepower at a faster rate. The primary downside was that the grenadier no longer had a fighting rifle. Consequently, they were reliant on their pistol and/or fellow riflemen to engage close targets.

The XM148 was ambitious but overly complex for its intended role. The launcher was designed to mount to the bottom handguard of an M16 rifle. This allowed the grenadier to serve their intended role while also fulfilling the role of a rifleman. However, the XM148 had many small parts which could be easily lost when disassembled. The launcher also had a slide open action which limited the variety of 40mm shells it could fire. Additionally, versions of the XM148 launcher had an extended trigger bar that allowed the grenadier to fire the weapon without shifting their hand off the M16. Unfortunately, this was overly complicated and could cause malfunctions.

Another interesting prototype from the era that saw service with the Navy SEALs was the T148E1, better known as the “China Lake”. Named after Naval Air Weapons Station China Lake where it was developed, the China Lake is a pump-action 40mm grenade launcher. The China Lake fed from a 3-shell tube with an additional 40mm shell in the chamber. Again, the China lake was fairly limited in the shells it could use and was prone to jamming if the user didn’t cycle it properly. However, the China Lake was the first step in the evolution towards multi-shot grenade launchers.

By the 1980s the US military has standardized on the rifle mounted M203 grenade launcher. The standalone design of the M79 and the China Lake had lost favor and rifle mounted launchers were in vogue. However, the M203 can be put into a standalone chassis, but it is not common. Like the XM148, the M203’s action slides open which limits the ammo types that it can use. However, the M203 is a much simpler and user-friendly design and is still in service today. Additionally, the M203 comes in a variety of barrel lengths and mounting platforms. This allows it to be mounted to a wide variety of host rifles.

In 2005 the United States Marine Corps revisited the multi-shot grenade launcher idea. One company attempted to produce an updated version of the China Lake. However, the USMC ended up buying an American made clone of the South African company Milkor’s “Multiple Grenade Launcher” (MGL). The weapon had been in use by the South African military for over 20 years by the time the Marines got ahold of it.

The USMC gave the MGL clone the designation M32. The M32 uses a 6-shell revolver style action. The launcher also utilizes a double-action trigger which allows the users to attempt to re-shoot a grenade if it doesn’t go off. In prior designs, if a grenade misfired, the user had to remove the unfired shell. For obvious reasons, the double-action trigger of the M32 was an improvement as it allowed the user to ensure the grenade wouldn’t go off while attempting to clear a misfire.

Additionally, the M32 comes with MIL-STD 1913 rails which allow the user to mount grips, lights, and lasers. The M32 also comes standard with a red dot style optic that is quickly adjustable for grenades range/trajectory. Eventually, the USMC would widely adopt the M32A1 which had a shorter barrel and a reinforced receiver that allow the user to fire higher pressure shells.

In the mid-2000’s the M203 would begin to be phased out for the newer HK M320 grenade launcher. The M320 was a vast improvement on the M203 despite being heavier than its predecessor. The M320 can be used as either a rifle-mounted or stand-alone launcher. The sights can be moved depending on if the shooter is right or left-handed. There is also a folding foregrip that can be replaced with a MIL-STD 1913 rail section. Additionally, rather than slide open, the M320’s action was spring-loaded and side opening. This allows the user to fire almost any length shell they desire. Like the M32, the M320 has a double-action trigger, allowing the user to ensure a misfire is a misfire.

Many grenadiers opt to use the M320 as a standalone launcher. This is done primarily because of two major flaws with rifle-mounted designs:

The M320’s stand-alone stock collapses which makes it relatively easy to carry and some companies produce holsters for them. Although having the launcher in a stand-alone configuration makes it slower to get into action, most problems that require the use of a grenade launcher are “over there” problems. Therefore, time plays less of a factor in engaging targets.

Although the SSW 40 provides the user with a significant increase in firepower compared to previous designs it’s not without its flaws. The magazines a big, bulky, and require a new pouch system to carry. Older style grenade belts and vests allow the user to disperse the grenades across their body. However, it would be hard to fit more than two SSW 40 mags on the front of the body without creating serious bulk. Once again, standalone launchers severely limit the capabilities of the grenadier. The SSW 40 can only cycle very specific-sized 40mm shells. Additionally, the semiautomatic design is more prone to malfunctions especially when cycling shells as big as 40mm grenades.

It’s good to see advancements in small arms, but a gap in the market wasn’t the reason no one uses semi-automatic grenade launchers. 40 years of iterative development led the US Army to issue compact standalone grenade launchers alongside standard M4s. The US Army’s Next Generation Squad Weapon doesn’t even have provisions to mount a grenade launcher to the rifle. Only time will tell if the SSW 40 will become a quintessential grenadier’s weapon or remain as vaporware. However, the latter seems far more likely.