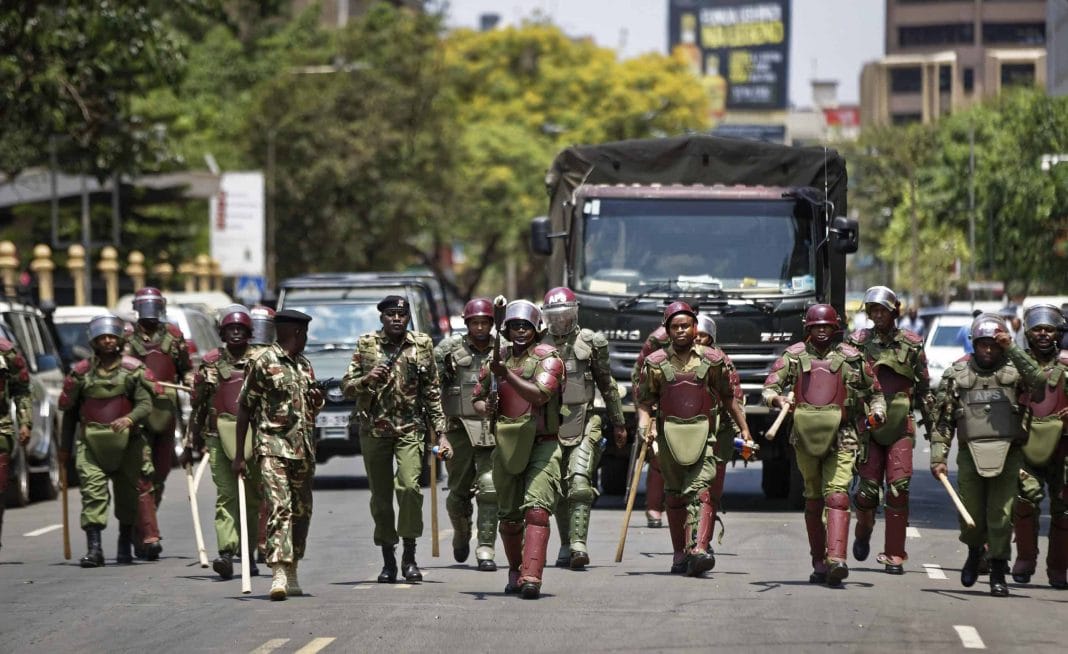 This month it was reported that an alleged death squad is operating inside Kenya’s police force, using Facebook to target and kill young men they believe to be gang members. These youth suspected to be criminals were profiled within various Kenya based Facebook groups by so-called gangster hunters. Residents of poor urban areas say there are various Facebook groups that are updated with grisly pictures of slain victims almost every day.

For some time, Kenya has faced an Islamist terrorist threat, including an ongoing battle with al-Shabaab, which is coordinating attacks out of Somalia. In January, the group attacked a hotel and office complex in an affluent area of Nairobi, lobbing grenades and shooting indiscriminately, killing 21 people. In 2013, Westgate shopping centre in Nairobi was taken over by al-Shabaab who went on a killing spree leaving 67 people dead.

However, Kenya faces a significant internal security threat a well. Crimes in urban areas are most commonly conducted by gangs who terrorize citizens and there are regular reports of attacks against persons by groups of armed assailants sometimes leading to death. “Almost everybody is armed and I am not talking about one or two guns, there are thousands of them in the hands of young boys and girls”, said a police officer to a researcher at Jomo Kenyatta University of Agriculture and Technology. The violence also turns against the gang members themselves. According to police reports in Nairobi, one gang member is gunned down daily.

According to Mohammed Ali, one of Kenya’s top independent investigative journalists, over 1,500 Kenyan citizens were killed by the police since 2009. This figure is substantiated in a report by the Social Justice Working Group that documented at least 803 extrajudicial killings by police between 2013 and 2015 alone. Amnesty International claimed 57 people were killed by police only between 2016 and 2017. Ali estimates that Kenyans are currently five times more likely to be shot by a policeman than a criminal.

It seems that something even more sinister is going on than simply killings of suspects, but also police using social media to target their victims.

Last November, former police chief Joseph Boinnet said, “the person behind the Facebook accounts is not a police officer, but [a civilian] passionate about security matters.” Duncan Omanga, a researcher at Moi University in Kenya, who has been monitoring these Facebook pages for three years, told the BBC that it seems to be a deliberate strategy by police to give the impression of “omnipresence and ‘state’ surveillance”. One of these groups called Nairobi Crime Free claims to have 63,000 members and has the motto “Forgiving a terrorist is left to God, but fixing their appointment with God is our responsibility.”

Prior to the recent Facebook gangster hunter scandal, a media controversy struck the police in Kenya in 2017. A police officer made international news after mobile footage showed him gunning down two unarmed men in broad daylight. Ahmed Rashid, or otherwise known as ‘Kenya’s Killer Cop’, sought to clean the streets of gangsters and criminals in Eastleigh, Nairobi. He also used social media to proudly show off his deadly acts. Going by the online moniker ‘Hessy wa Kayole’, he posted pictures of the criminals he executed.

The full force of the law

The excessive use of force and summary executions are not limited to street criminals in Nairobi. In 2014, that counterterrorism officers told Al Jazeera’s investigative unit that extrajudicial killings were sanctioned by the Kenyan government and by even the president’s office. They confessed to inflicting hundreds of extrajudicial killings a year, targeting alleged “Muslim radicals” and planting evidence. At the time, Kenya’s Information Minister, Fred Matiangi, said “the accusations of the police being involved in the killing of Muslim clerics and so on is just gossip, rumour and innuendo, pedalled by people who have a different kind of agenda.” The Al Jazeera investigation also uncovered that not only did British and Israeli security forces have knowledge of the elimination programmes, but they provided training, support and intelligence in the efforts.

‘It’s a crime to be a young man here’

“overwhelming” testimonies of “the existence of systematic, widespread, and carefully planned extrajudicial executions undertaken on a regular basis by the Kenyan police”.

A 2009 report by the UN special rapporteur on extrajudicial executions

The spokesman for Kenya’s Interior Ministry, Mwenda Njoka, told the BBC that the Kenyan government is against extrajudicial killings and that the government has “a legal mechanism through the Independent Policing Oversight Authority (IPOA) and other legal forums to address legal measures employed by security agents.” However, it is apparent for some time that the Kenyan police operate with impunity and at least over the last 10 years have done their part in terrorizing the citizenry, especially the poor. Juliet Wanjira, a campaigner with the Mathare Social Justice Centre (MSJC) that documents the cases of young men shot by the police, told the BBC “it’s like it’s a crime to be a young man here”.