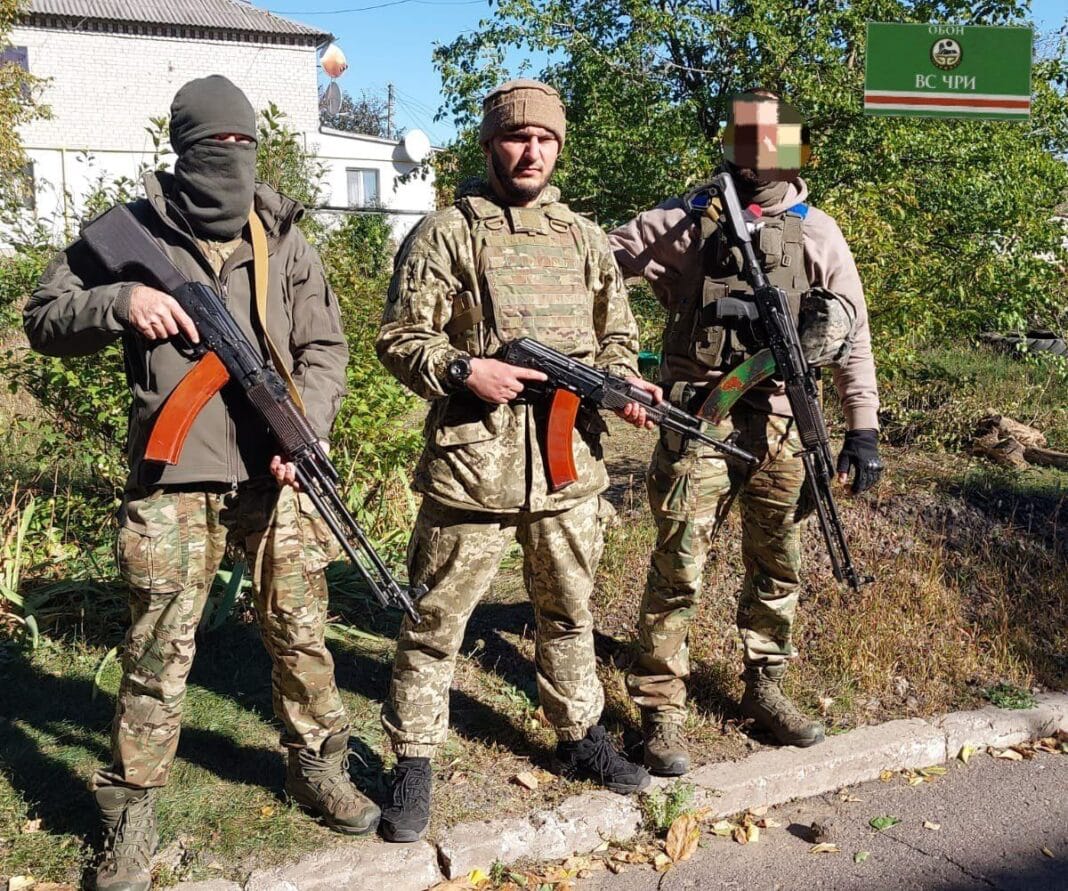 The Ichkeria OBON is an all Chechen volunteer unit of the Ukrainian Foreign Legion. The acronym OBON is a transliteration of отдельный батальон особого назначения or separate special purpose battalion. The unit is part of the armed forces of the Ichkerian government, the government-in-exile of Chechnya since the end of the second Chechen War. The unit has engaged in conventional and unconventional warfare on behalf of the Ukrainian government and participated in the liberation of Kherson. It is an incredibly young unit but its members view the war in Ukraine as an extension of their fight against Russia in their occupied homeland.

The history of the Chechen people’s struggle with Russia dates over 500 years, to the times of the Russian Empire. Chechnya is located in the Caucasus Mountains to the south east of Ukraine. Historically, the Chechen people divided themselves by geographic regions into clans. Due to a combination of the extremely rough terrain of the Caucasus Mountains and having neighbors which constantly wanted to subjugate them, Chechens developed a strong warrior culture that exists to this day. In the 1700s the country almost entirely converted to Islam in opposition to the Russian Empire.

During the Soviet era, Stalin attempted to eradicate Chechen culture. The Soviet government arrested and executed Chechen Islamic religious leaders and deported almost the entire Chechen population to Kazakhstan. However, the Soviets were unsuccessful in eradicating the Chechens’ faith or their culture. When the Soviet Union collapsed in the early 1990s, Chechens saw their opportunity for independence and on the 12th of March 1992 they declared their independence.

Two years later in January of 1994, the new country renamed itself the Chechen Republic of Ichkeria. However, later that same year the Russian Federation invaded, sparking the first Chechen War. The war lasted two years but the Russians were unsuccessful and ultimately retreated in 1996. In 1999 the Russian FSB conducted a false flag operation, by bombing apartments in Moscow and killing its own citizens the Russian government created a pretext for another invasion. Once again Russia invaded Chechnya, this time the conflict lasted until 2009. The war only ended when the leader of Chechnya, Akhmad Kadyrov, sold out his compatriots and began to work for the Russians. Since then the government of the Chechen Republic of Ichkeria has been living in exile, vying for an independent Chechnya.

In many ways Chechens who support independence from Russia see the fight in Ukraine as their fight. Both Ukraine and Chechnya suffered at the hands of the Soviets. Men, women, and children of both countries have been mercilessly killed and raped by Russian soldiers. Although the two countries have vastly different cultures, they share a kinship in the form of having an abusive neighbor. As of the 18th October of 2022, the Parliament of Ukraine officially passed a resolution recognizing the Russian genocide and occupation of the Chechen Republic of Ichkeria. (Source)

The history of Ichkeria OBON is extremely short since the unit only came into existence earlier this year. Akhmed Zakayev, leader of the unrecognized government of Ichkeria ordered the creation of Ichkeria OBON in order to assist the Ukrainians in their fight against the Russians. It is the fourth of its kind, with three other Chechen battalions fighting alongside Ukraine. (Source)

Ichkeria OBON has pledged allegiance to the Chechen Republic of Ichkeria, and is recognized as the “the armed wing” of the Ichkerian government. (Source) Fighters from Ichkeria have been taking part in the Ukraine conflict since it began back in 2014. However, the formation of the OBON was the beginning of official military assistance between Ukraine and the unrecognized state. The battalion immediately began fighting for the Ukrainian government as an official part of the Foreign Legion of Ukraine. (Source)

Since Ichkeria OBON is considered part of the armed forces of Ichkeria, the battalion’s highest authority is the president, Akhmed Zakayev. The official website of the Ichkerian government gives us some insight into the structure and capabilities of the battalion. Press releases detail promotions and official appointments to command for various members of the unit. (Source)

Aside from this publicly available hierarchy, it is highly likely that the battalion’s force structure resembles a typical Eastern European military. Subordinate officers command companies of soldiers which are composed of platoon sized elements which are made up of squad sized elements. Together these smaller elements work together to achieve the commander’s intent which is derived from higher authority within the Ukrainian Foreign Legion. It is highly likely that when the war in Ukraine is over, command of the OBON will transfer back to the Armed Forces of Ichkeria.

There isn’t anything publicized about how the unit recruits its members. It’s highly likely that it relies on word of mouth to recruit veterans of the Chechen Wars and other Chechens with combat experience. However, the volunteers must sign a contract to fight in the OBON. Recruits must pass a screening process which includes a criminal background check. Additionally, recruits need to become familiar with the rules of international humanitarian law to prevent the torture or killing of prisoners of war. (Source)

Ichkeria OBON’s exact mission is unclear. Obviously command directives are kept secret to avoid compromising combat effectiveness and the overall military objects. Aside from conventional fighting, we know that the OBON has been used for more secretive missions. The unit is utilized for missions involving: (Source)

The unit has been tasked with covert fighting and intelligence collection missions for the Ukrainian Foreign Legion. Meaning that members likely engage the enemy using partisan or guerilla tactics, forgoing traditional uniforms in favor of lower profile attire. Subsequently, their missions carry a higher risk as they are not protected under the rules of warfare if they are not in uniform. However, Russia has shown it doesn’t have much respect for the rules of warfare anyways.

Additionally, Ichkeria OBON wages information warfare against the Russian regimes in Chechnya and Russia. The unit’s Head of the Information and Analytical Service, Hussein Dzhambetov disseminates anti-Russian and pro-Ichkerian information and propaganda. However, it is worth noting that he uses the callsign Bandera. A reference to the far-right Ukrainian nationalist who collaborated with the Nazis against the Soviets during World War II. (Source)

Ichkeria OBON has not seen the same level of budget flex as the rest of the Ukrainian Armed Forces. Oftentimes its members can be seen in outdated and knock-off versions of western kit. However, members can also be seen with extremely modern uniforms and equipment. If its members are wearing uniforms they are typically the standard Ukrainian camouflage pattern. Additionally, green body armour vests appear to be standard issue for its fights. The commander of the unit has been seen wearing a knock-off version of a Crye JPC vest. Additionally, fighters are often seen with older style ballistic helmets such as the American PAGST or MICH style helmets, although some fighters have been seen with British helmets or choose to forgo them entirely.

The OBON uses weapons that are typically for the war in Ukraine. Its members utilize AKM and AK-74 pattern rifles, most often their folding-stock variants. Additionally, fighters can be occasionally seen with suppressors mounted to their carbines. The unit appears to rarely utilize specialized small arms such as light/heavy machine guns or marksman’s rifles. The heaviest small arm seen in use by the OBON is an RPK-74. The RPK-74 is simply a beefed up version of the AK-74 with a longer, heavier barrel. This allows it to be fired in full-auto for longer than a AK-74 however it cannot provide large volumes of fire like a belt fed light machine gun. This is likely due to a desire to maintain more mobility and ease of resupply.

In addition to their standard fighting carbines, Ichkeria OBON fighters are often seen utilizing explosive weapons such as:

The RPG-7 and NLAW are both single man operated, shoulder fired rocket launchers. These are predominantly used to take out enemy armored vehicles and reinforced fighting positions. The GP-25 is an individual grenade launching system that mounts to the bottom of the user’s AK pattern carbine. The GP-25 is intended to destroy unarmored vehicles or clear out dead space while assaulting objectives. Dead space refers to any area that likely contains enemy forces but cant be confirmed visually. An example would be if you were taking fire from a distant window or vehicle. It’s possible that the enemy could have displaced, but launching a grenade into the window makes you much more confident that they won’t be firing on you anymore. Ichkeria OBON’s fighters have been seen with them mounted to both AKMSs and AKS-74s. (Source)

Despite having only existed for less than a year, Ichkeria OBON has played an important role in the fight against Russia. Its members have fought and died in order to prevent Ukraine from falling victim to the same fate their country did years prior. However, their fight hasn’t been in vain. Ukraine’s recognition of the Russian occupation of Chechnya and the genocide it perpetrated there is the first step towards reclaiming their occupied homeland. Many high ranking members of the unit have stated their readiness and willingness to take the fight to Grozny and reclaim their ancestral home. It is highly likely that the end of the war in Ukraine will not be the end of Ichkeria OBON as they continue their fight against Russian occupation.