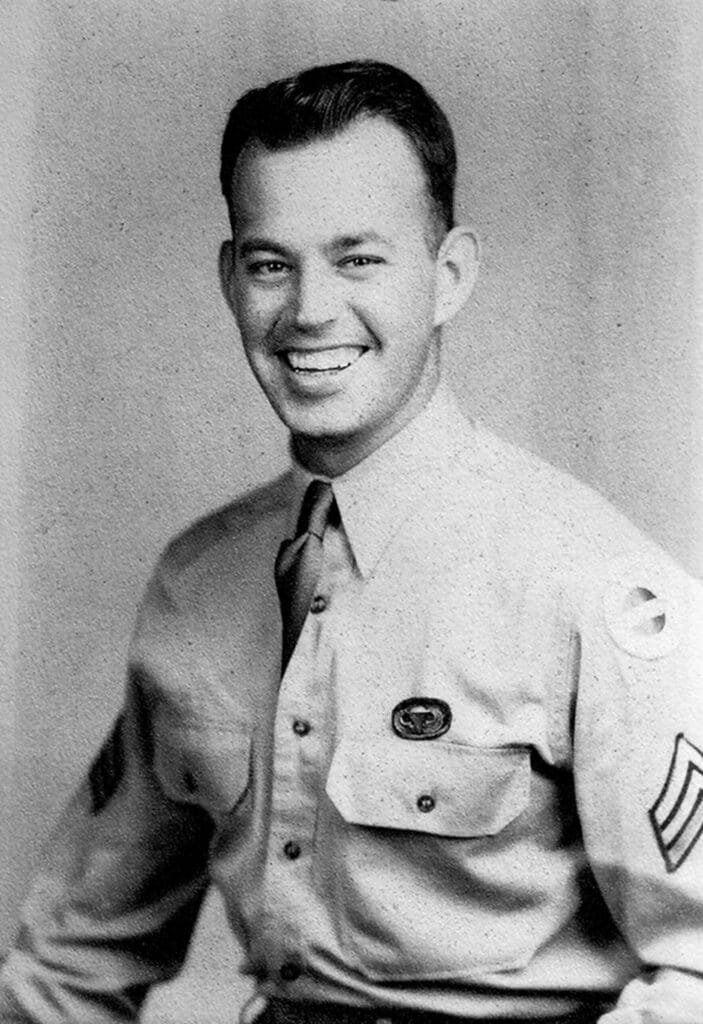 John M Steele was born in Metropolis, Illinois (US) on the 29th of November 1912. His father, also named John, piloted freight boats on the waters of Ohio. His mother, Josephine, took care of their home and raised seven children, John being the eldest. Steele was never a great student and eventually dropped out of college and focused on becoming a barber. When the United States joined the Second World War, John volunteered to join the paratroopers at the age of 29. Two of his brothers, James and Norman, joined the navy and the army.

In the spring of 1943, Steele went to North Africa with the 82nd Airborne Division, Company F, 505th Parachute Infantry Regiment. He first saw combat with a battle jump on Sicily. There he broke one leg. Then a second jump on the Naples region, without injuries this time. Steele and his companions from company F then took the boat to the United Kingdom. There the Allied forces were preparing the landing on the French coasts of Normandy.

In the night of Monday the 5th of June 1944 the Supreme Allied Commander General Eisenhower. launched Operation Overlord.

There are no large cities in the arc between Cherbourg and Caen; only Carentan, Montebourg, Bayeux, and Valognes can be regarded as sizable. A spiderweb of roads connect one town and village and hamlet to another. One town at the centre of a web of roads was Sainte-Mère-Église.

15,000 paratroopers of the 82nd and 101st Airborne Divisions took off from England with identified drop zones away from the area. They were assigned to drop near the town of Sainte-Mère-Église, to cut off the German retreat from the beachhead landings. This was five to six hours before the beach landings of the allied forces. The orders had been changed twice due to a great concentration of German troops and uncertain weather conditions.

John Steele’s mission was to jump on the outskirts of Sainte-Mère-Église and take control of it to facilitate the offensive planned at dawn on the coast, 10 km away at Utah beach. Weather conditions that night were not satisfactory enough, which posed a hazard. Adding to that, each squadron leader flying at that point had the lights on its wings on, but the rest of the formation did not. This with the inexperience of some of the pilots, led to the death of several members of F company before they even reached the ground at Sainte-Mère-Église.

Because of the German-imposed curfew, the town of Sainte-Mère-Église, like all the towns in Normandy, was dark and shuttered tightly that night. The town had been the target of an aerial attack, during which a stray incendiary bomb set fire to a house east of the town square. That night, church bells were ringing out in alarm. The townspeople were worried more businesses and homes would be threatened so they formed a bucket brigade to extinguish the blaze and prevent any more flare-ups. Meanwhile, the thirty or so German soldiers in town kept firing at the sound of unseen aircraft overhead.

Whilst trying to avoid the blaze, Steele crashed on the church, a beautiful building of the XII century. His parachute was caught at the base of the bell tower and left him suspended at a dozen meters from the ground. He tried to cut himself loose, but his knife escaped his grip and fell along the wall. Another paratrooper named Kenneth Russell also fell on the church but freed himself. Steele was not so lucky. He was left dangling on the side of the church, wounded, but conscious. He decided to play dead as his last resort.

The Germans eventually found him. They were going to leave him but figured he might be carrying important papers. When freeing him of the ropes and still alive, he was taken prisoner. He managed to escape through a window four days later. He soon re-joined his division and helped capture the village, which became the first French town liberated by the Allied Forces after the 6th of June 1944, better known as D-Day as part of Operation Boston. Steele was taken back to the United Kingdom to be treated for his wounds.

After recovering from his injuries, he took part in the unsuccessful Allied military operation known as Market Garden in the Netherlands. He continued to serve in the Battle of the Bulge and the crossing of the Rhine River into Germany when the war ended. Therefore, he was reassigned to the 17th Airborne and went to Marseille to take the boat that would lead him to the United States to finally find civilian life in September 1945.

Awarded the Bronze Star for valour and the Purple Heart for being wounded in combat, Steele spoke little of the war. Like his relatives, he grieved the loss of his brother Norman, killed in German in April 1945. Steele returned to civilian life working in various trade jobs before working for electricity companies. He married twice and moved to North Carolina with his second wife, a nurse. He also yearly visited Sainte-Mère-Églis

Around 1957, a letter reached him. An Irish-born journalist, Cornelius Ryan, was writing a book on D-day; he was soliciting the help of hundreds of survivors of these memorable hours. All received the same standard questionnaire. It was up to each of them to provide biographical and personal memorabilia if they wished to do so. John Steele, to the question “where were you on June 5, 1944 at midnight?”  replied: “Suspended ON the bell-tower, under the cornice of the church of Sainte-Mère-EGLISE.”

The book, entitled “The Longest Day”, was published in November 1959 in the United States. Cornelius Ryan devoted only about twenty lines to the misadventures of Steele, but this passage was enough to make him known worldwide in the movie version in 1962.

He died from throat cancer on the 16th of May 1969 in Lafayetteville. He wanted to be buried in Sainte-Mère-Église or Arlington Cemetery, but he took the secret to his tomb and is currently buried at the Masonic cemetery in Metropolis.

The events of the ill-fated paratroopers are commemorated in the church’s stained-glass windows, as well as elsewhere in the town. An effigy of John M Steele dangles from a spire atop the church, though it is not where he had gotten stuck. Steele was actually caught up on the diagonally opposite spire, but his image is displayed where it will easily be noticed by people entering the town square. There is also a museum dedicated to the Airborne Division across the road from the church. There is also a pub full of letters Steele sent to the people of Normandy and specially of that beautiful French town. Private John M. Steele will forever remain the saviour hanging on the roof of Notre-Dame-de-l’Assomption on the evening of the decisive offensive.