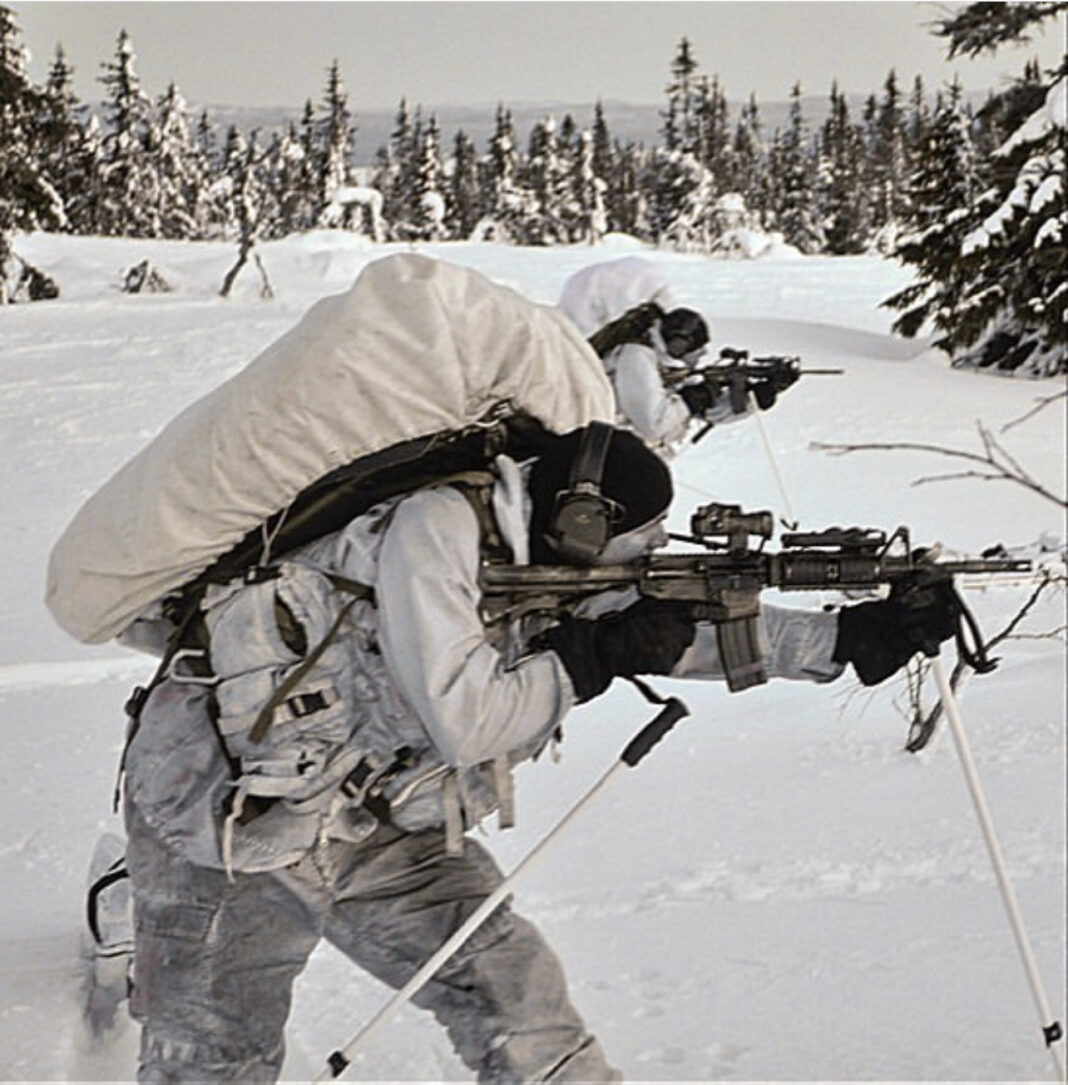 The Joint Task Force 2 (JTF2) is a highly secretive and elite special operations unit of the Canadian Armed Forces. It specialises in counter-terrorism operations, both at home and abroad (source).

The Joint Task Force 2 was created in April 1993 (source). Prior to that, the Royal Canadian Mounted Police’s (RCMP) Special Emergency Response Team (SERT) was Canada’s primary Special Operations force. The SERT, created in 1986, was responsible for counterterrorism and hostage rescue. Upon its dismantling, the JTF2 became responsible for these tasks (source).

In 1993, the first 100 members joined the new unit. Most of the new recruits were members of Princess Patricia’s Canadian Light Infantry and the Canadian Airborne Regiment (source). Subsequently, personnel were divided into assaulters and support personnel, which consisted of a sniper troop, an assault troop, and a small staff.

After 9/11, the JTF2 took part in its first major deployment abroad and joined the international special operations forces coalition in Afghanistan (source). Moreover, the budget allocated to the unit increased to $120 million over six years (source). This helped the expansion of the JTF2 capabilities, the renewal of equipment, and the recruitment of more personnel.

2. Organisation of the Joint Task Force 2

JTF2 has around 300 personnel and the average age is 37 (source). The JTF2 is led by a Lieutenant-Colonel. The unit’s base is located in Dwyer Hill Training Centre in a rural area in Ottawa (source, source). The centre is believed to house:

The unit comprises two or four-man teams, also known as “bricks” (source). Every brick has a specific speciality, such as sniping or communications.

3. Tactics, Techniques, and Procedures (TTP) of the JTF2

The Joint Task Force 2 is a Tier 1 Unit since it is usually employed in direct action operations (source). The JTF2 focuses on counter-terrorism operations, which can take place both in Canada and abroad (source). The unit specialises in hostage rescue, foreign internal defence, protective security, special reconnaissance, and surveillance.

Applicants to the unit need prior military experience to be considered. Gender and marital status are not factors considered throughout the selection process, although the unit is yet to recruit female operatives into the ranks (source, source). The general requirements to join the JTF2 for all the candidates are:

There are three pathways to becoming a JTF2 member. The first is as a Special Operator Assaulter (SOA), which is directly employable in tactical tasks. The second route is as personnel employable in combat support tasks. Finally, the third one consists of the recruitment of active combat service support personnel.

The journey to becoming a JTF2 member is lengthy and highly challenging (source). The training is harsh both physically and mentally, and the course is designed to be highly selective. Therefore, the recruits have to pass a number of tests to progress.

The JTF2 PFT for Special Operator Assaulter consists of:

During the seven days of the JTF2 Assessment Centre, which follows the PTF (source), the candidate will be assessed on:

This phase is fundamental for the whole process because it will assess if a candidate is able to:

The members of the Joint Task Force 2 are trained to an incredibly high standard (source). Discretion and professionalism are features that characterise this unit. As a result, the final phase of selection is the Special Operations Assaulter Course (SOAC), which lasts around seven months (source). During the SOAC, the future JTF2 members will train on basic and advanced weapons, insertion and extraction techniques, land navigation, and patrolling.

The JTF2 motto is “facta non verba”, which translated from Latin means “deeds not words”, and is also on the unit’s patch. In the middle, there is a V-42 stiletto, which is the main CANSOFCOM symbol. On the right, there is the red maple leaf, the national symbol, and on the left, there is a representation of Canada on a geographical map.

In November 1996, the Canadian Army employed the JTF2 as a protection unit in Zaire (source, source). Its task was to help Canadian General Maurice Maril to meet Rwandan-backed rebel leader Laurent Kabila. While on their way, Congolese militias also attacked the JTF2 convoys. In the same year, the Joint Task Force 2 was also deployed to Haiti to advise and train the security forces of the then President René Préval (source). Accordingly, the training focused on how to raid weapons and repel the revolutionary arms.

In February 2004, the Canadian Army once again deployed the JTF2 to Haiti (source, source). On the 29th the elite special operations unit took control of the airport from which the then-President Jean-Bertrand Aristide was taken by US Marines (source). The unit’s task was also to protect the Canadian embassy during that period of crisis.

In 2010, troops of the Joint Task Force 2 were assigned to provide support and security at the Winter Olympics Games in Vancouver (source). Although some forces were on standby, others backed the Royal Canadian Mounted Police (source). Even though the threat level during the Olympics was low, the Canadian government opted to increase the defence budget around this time to provide additional security. The total budget for the military during the 2010 Games was around $165 million (C$212).

The JTF2 also provided security to prominent individuals in combat zones. In May 2007, the JTF2 assisted Stephen Harper, the then Canadian Prime Minister (source).

7.4 The Joint Task Force 2 in Afghanistan

Following the 9/11 attacks, in December 2001, the Canadian government decided to send around 40 JTF2 soldiers to Afghanistan to be part of Task Force K-Bar (source). Significantly, this was the first deployment of the unit in major combat outside Canada. The K-Bar Task Force ultimately comprised of around 3,000 Special Operations Officers from multiple international forces (source).

The Canadian government initially did non announce JTF2’s participation in Afghanistan (source). It was later discovered by various pictures published by The Globe and Mail showing JTF2 members escorting detainees and delivering them to the Americans. During the period between December 2001 and November 2002, the JTF2 soldiers claimed to have captured 107 Taliban leaders and killed 115 Taliban or Al Qaeda militants (source).

In March 2002, the JTF2 took part in Operation Anaconda. During that operation, the reconnaissance team took part in direct action missions and close protection tasks. JTF2 worked alongside the New Zealand Special Air Service and the US Army Special Forces Operational Detachment-A (source). Later, in July 2005, the Canadian government sent more units to Afghanistan and fight against the remaining Al Qaeda fighters (source). The JTF2 was attached to a US special forces command in the Kandahar base. In 2004, the JTF2 earned a commendation for heroism from the then US President, George W. Bush, for its efforts in Afghanistan (source).

In August 2021, the Canadian Army deployed the JTF2, alongside the CSOR, to Afghanistan to destroy sensitive documentation and to assist with the evacuation of staff in the Canadian embassy in Kabul following the Taliban takeover.

In 2006, the JTF2 worked alongside the US and the UK to rescue four Christian Peace Activists in Iraq (source). Swords of Righteousness Brigade, a small terrorist group, had kidnapped them in Baghdad. However, two of these activists were from Canada, on from the UK and one from the United States.

In response to the kidnapping, Task Force Knight, which was the UK special forces task force in Iraq, launched Operation Lightwater (source). The British 22nd Special Air Service Regiment (SAS) had to find and recover the four hostages, the US to provide technical intelligence, and the JTF2 to assist SAS during the operation. On the 23rd of March 2006, the SAS rescued three hostages but found the fourth dead. Although the Canadian government did not comment on the mission, both the British Foreign Office and the Pentagon mentioned the fundamental role of JTF2 during the mission (source).

In 2014, The JTF2 took also part in Operation Impact (source). Impact was a Canadian operation aimed to train the Iraqi government’s military to fight the Islamic State in Iraq. The training is mainly based on improving the Iraqi armed forces’ skill sets, such as training on the use of heavy machine-gun fire, and rocket-propelled grenades (RPGs), as well as providing expertise on battle planning. After receiving the sniper training, Iraqi officials noticed a “tenfold increase” in Iraqi sniper activity against IS as a result.

On the 22nd of June 2017, a JTF2 soldier killed an Islamic State fighter at a distance of 3,540 meters (2.2 miles) – potentially the longest range snipe ever publically recorded (source). The sniper and his spotter were stationed on top of a skyscraper, and the shot took almost ten seconds to reach the target. The rifle used was a McMillan TAC-50 .50 heavy-calibre. This beat the previous record set by British Cpl. of Horse Craig Harrison set the previous record in 2009, who had shot from 2,500 meters (1.5 miles) away (source).

Therefore, the JTF2 is a highly selective and specialised unit of the Canadian Special Forces and has no doubt been instrumental in multiple Canadian and International military efforts. The unit has achieved high accolades as a result of its work in the war on terror and commitment to national security support operations.