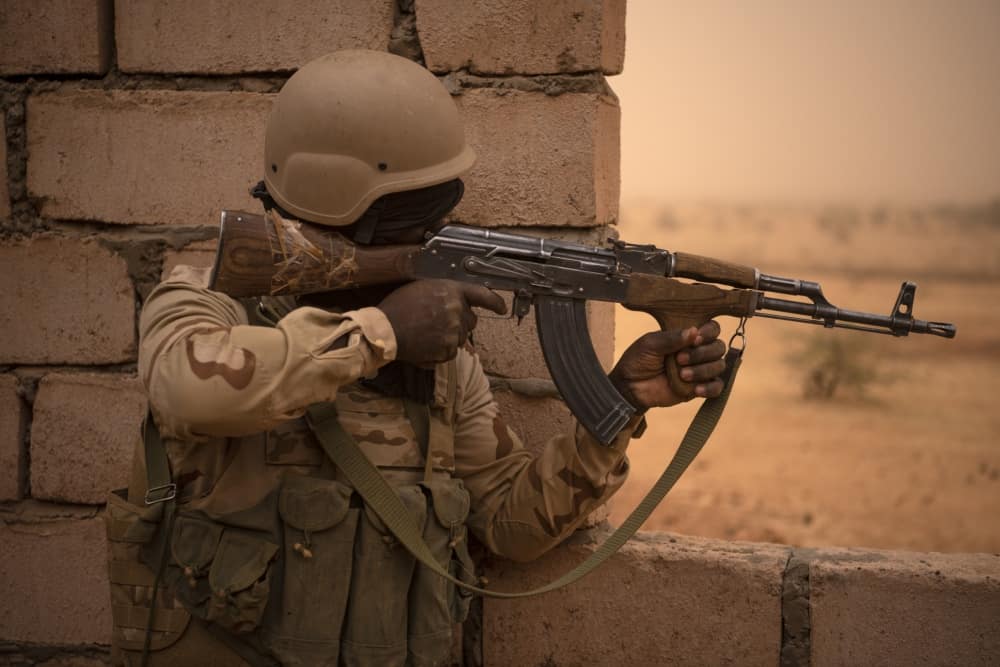 Mauritania‘s Successful Fight Against Terrorism is hailed in the region and in Western capitals. However, its poor human rights record and treatment of journalists doesn’t receive similar attention.

KJ-1. The West Sahel region is engulfed in radicalism-driven violence. The phenomenon is spreading now towards the Gulf of Guinea coast, endangering even more countries.

KJ-2. Since the widespread extremist attacks in the region, Mauritania is the sole country with almost no terrorist attacks.

KJ-3. Mauritania managed to adjust its military taught and counterterrorism strategy to face widespread radicalism in the region.

In 1960, Mauritania alongside many other countries in West Africa achieved independence from France. Mauritania was under authoritarian rule, military dictatorship and democracy. Mauritania was only the third member of the Arab League to recognise the State of Israel. Thereafter it started antiterrorism cooperation with the United States, which improved the overall security.

However, In August 2005, the country experienced a military coup. Democracy was restored in 2006, but in 2008 another military coup occurred. In 2009, Mauritania cut off relations with Israel because of the latter’s offensive in Gaza. Subsequently, the country’s relation with the US worsened and economic aid was halted. At that time terrorism was a rising threat in Mauritania. From 2007 to 2011, the country was highly affected by terror attacks conducted by al-Qa`ida in the Islamic Maghreb (AQIM).

After that, Mauritania became a node of passive terrorist activity, although it was rapidly proliferating all around it. On May 8, 2018, AQIM issued a statement that specifically mentioned Mauritania in a call for attacks, signalling a possible renewed jihadi terror threat to the country. For several years, Mauritania has served as the hub for AQIM’s jihad activity, with some attempts to establish a network of cells. Mau

Mauritania was among the first countries in the region to benefit from a US capacity-building program offered by the U.S. Africa Command (AFRICOM). The country was an early and central participant in the U.S.-initiated Trans Saharan Counter-Terrorism Partnership (TSCTP), whose objectives included improving basic infantry and special forces skills, increasing communications and logistics capabilities, improving partner nation capacity to synchronize intelligence and participating in Flintlock, an annual AFRICOM-sponsored JSOTF-TS-conducted regional counterterrorism exercise.

The regime also drove the most hardened militants out of the country. In 2009, Mauritania created a rapid reaction force and in 2010, the whole army was restructured. In 2013, Mauritania hosted AFRICOM’s Operation Flintlock. Deradicalization programmes were introduced and limited amnesties were granted to convicted members of terror groups. The programmes consisted of reinterpreting the militants’ preferred religious texts in ways that steered them away from violence and toward forgiveness.

While terrorism in Mauritania was plummeting, the rest of the West Sahel was facing increased jihadi activity, especially in Mali. The outflow of weapons and fighters from Libya only proliferated the terrorist activity in the region and a variety of radical factions formed (Ansar Dine, the Movement for Unity, Jihad in West Africa (MUJAO), al-Mourabitoun, the Macina Liberation Front etc.). In 2017, these groups fused into Jama’a Nusrah al-Islam wa al-Muslimin. Groups affiliated with the Islamic State also emerged, predominant being the Islamic State in the Greater Sahara (ISGS) and the Islamic State in West Africa Province (ISWAP). These groups carried out attacks in Mali, Niger, Libya, Algeria, Burkina Faso, the Ivory Coast, Nigeria, Cameroon and there were reports of possible attacks in Senegal as well.

Mauritania’s media outlets are often used by radical groups to promote their agenda. This is in part because some of the leaders of the jihadist groups in the Sahel are of Mauritanian origin, but also because the Mauritanian media does not censor the messages. Furthermore, the country is bilingual in Arabic and French, ensuring the dissemination of the information to a greater audience across West Africa.

AQIM defines the “Islamic Maghreb” as being from Libya to Mauritania, ignoring today’s borders. In 2018, the group called for terror attacks on French targets in Mauritania specifically. In contrast, Mauritania has suffered no terror attack since then.

Far from a Free Country

Mauritania stretches over a large swath of the Saharan desert, with a population of only 4 million people. A variety of socioeconomic problems and long-standing authoritarianism have exposed the country to instability and extremism. Only slightly above 50% of the population is literate, while the abundance of natural resources (iron ore, natural gas and fish stocks) did not bring economic prosperity.

Persecution of journalists and activists, and military interference is part of the country’s history and the power is still monopolised by Mauritania’s elite. Corruption among the political leadership is high and there is a strict ethnolinguistic and racial stratification in the society. The main divide is between the elite – a former slave-owning caste (the bidane or the Berbers, also known as “white moors”) and the former slaves and their descendants (the haratine, also known as “black moors”).