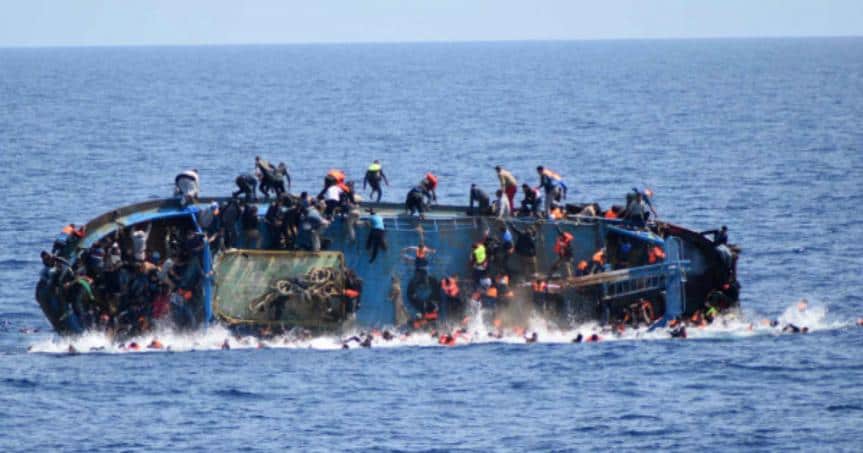 According to the UN Migration Agency, at least 62 people died when their boat sank off the coast of Mauritania, on fifth of December. The ship was carrying around 150 migrants coming from The Gambia, trying to reach the Canary Islands. The route was popular among migrants trying to get to Europe. However, because of this incident, people are now afraid of following the same path.

The other route is through the Saharan desert, which is even more perilous. People taking this route risk being sold as slaves in Libya and they also have to cross the Mediterranean, where frequent storms occur. The International Organisation for Migration’s (IOM) Missing Migrant Project reported that 158 people have died in 11 shipwrecks this year along the 1.400km-long Western Africa migration route, which runs from Cabo Verde to the Canary Islands. Some of the trips also began in Morocco or Mauritania.

With a population of only 2 million people, The Gambia is one of Africa’s smallest countries. Unlike many of its West African neighbours, it has enjoyed a long period of stability since independence in 1965. From 1994 to 2016, former ruler Yahya Jammeh held the grip on power, while constantly oppressing the opposition. After 22 years of totalitarian rule, the country elected a new president whose mandate began only after neighbouring countries pressed  Jammeh to leave the office.

Although the regime became more liberal since Adama Barrow’s presidency, the rule of law is ineffective and violence against women remains a serious problem. Moreover, a flourishing economy does not seem realistic in the near future. The Gambia River runs through the country from East to West. Contrary to expectations, only one-sixth of the land is arable and poor soil quality has led to the predominance peanut crop. The Gambia’s economy depends extensively on tourism, as well as sums of money sent by the Gambian people working abroad. For this reason, the Gambian youth finds it difficult to get a job that matches their skills acquired in the educational system. At the same time, most of the well-paid jobs are offered based on recommendations and relations, rather than merit.

The Economic Community of West African States (ECOWAS) Mission in The Gambia (ECOMIG) was scheduled to end its mandate in May 2018. Following the Barrow governments’ request, the mandate has been extended for another year to further facilitate security sector reform, due to ongoing concerns that pro-Jammeh loyalists in the military could cause political instability. Many Gambians fear that political tensions might cause further turmoil, leading eventually to an ineffective governance as in most of the neighbouring countries. Although protected so far from high-level social violence and oppression, the youth perceives emigration as a way of securing a better future, while still providing for the families left behind.

Africa is the continent where the movement of populations reaches the highest levels. However, migration reached its peak in West Africa, the most affected region. According to the IOM, more than 35,000 Gambian migrants arrived in Europe between 2014 and 2018. It is important to note that local governments in West Africa also perceive inter-region and transnational migration as a benefiting factor for their economies. Although migration leads to the loss of human capital – especially young labour, financial aids sent by the migrants working abroad contribute to the overall economic landscape, by compensating for those who are unemployed or whose jobs cannot provide a decent living.

Pursuant to the ECOWAS Treaty (Art. 59), any West African citizen has the right of free movement and establishment inside the ECOWAS region, with very limited administrative requirements. Despite this, migration towards the European continent is trending. Many West Africans willing to relocate prefer boarding on a dangerous sailing route through the Mediterranean or the Atlantic, rather than moving to a neighbouring country which might also face severe social security issues or extreme poverty.

During the second half of the last century the migration landscape in West Africa was different. Countries such as Côte d’Ivoire, Senegal, Ghana or Nigeria were attracting labour from their region, due to trade networks, oil and mines industries, agriculture etc. Between the ‘60s and the ‘90s, over 30 million West Africans left their country, with most of the movements occurring within the region. In 1999, the economic centre of West Africa – Côte d’Ivoire, suffered a military coup followed by civil war. Heavy migrant flows were redirected to Nigeria or Senegal where the political situation was stable, but these countries’ economies and living standards were stalling.

In the late ‘90s, the South-European states adopted a more restrictive visa policy, aimed at limiting the flow of migrants from Maghreb. Among the people trying to reach Europe by sailing from the North African coast, there was also a considerable population of West Africans. The tightening of visa granting criteria led to the establishment of numerous smuggling networks. Many migrants in the search for a better life continue to choose appealing to smugglers, putting their own safety at risk. Without proper identity documents, they become victims of human trafficking. Although the smuggling issue started to receive increasing attention during the 2016 European Union’s refugee crisis, these networks have a longer history.

By the 2011 Libyan Civil War, the country was already a hub for smugglers who were bringing Sub-Saharan Africans to the Maghreb. These networks have been tolerated by the Gaddafi regime since they were contributing to the national economy, by smuggling people willing to take the lower jobs.

As for today, there are two routes from North Africa to Europe that are highly utilised. One of them is the Western Mediterranean route, which connects Morocco to Spain through the Strait of Gibraltar. The other one is the Central or Northern Mediterranean route, which links Libya, Egypt and Tunisia to Southern Italy.  The last one has become the main passing route to Europe chosen by West Africans. In Libya, smuggling networks transitioned from offering solely transportation and assistance services throughout the journey to operating as organized crime entities, combining the smuggling with human and drug trafficking. Despite of migrants falling into the smuggling trap (as for 2018), Libya has not ratified the 1951 Refugee Convention, nor the 1967 protocol, and there is no asylum procedure in place in Libya.

Unless social and security measures are being initiated to control the smuggling networks operating in North Africa, many other West Africans are expected to become the victims of these groups. Following the sinking of the asylum seekers’ boat off to Mauritania’s coast, it is highly likely that most of the further attempts to relocate will take place through the Central Route. Due to increasing political and security instability in the region, slave markets and kidnappings will expand.