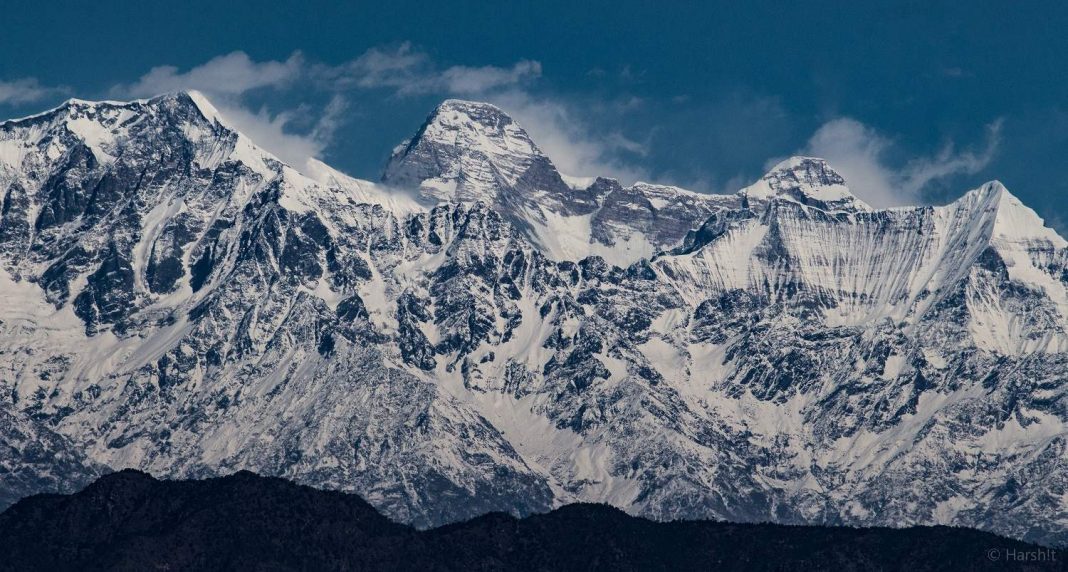 Nanda Devi: the Folklore Behind

The Indian regions of Garhwal and Kumaon are rife with plains and foothills leading up to the Himalayan Mountain range. The glorious mountain is home to some of the tallest peaks on the earth, where local legends say Hindu deities dwell; embodied in rock and sentiment.

Nanda Devi is the tallest of the regional peaks; named after a powerful goddess, according to local folklore.

Legend has it, a Pashtun prince who was madly in love with Nanda chased him. This prince was on the warpath against her father for refusing to give him the princesses hand in marriage. Nanda, desperate to evade the prince, ascended 25,643 feet up the mountain and merged with it. She became the “Devi”, meaning “fort” or “protector” in the Sanskrit language. Nanda Devi is the divine home of the goddess who protects the region from harm. A matriarchal figure made of stone.

If we get abstract, we can remove the archetype of a divine protector in the sky, and apply it to a tangible reality: nuclear weapons.

To a global superpower or even fledgling state, the possession of a nuclear weapon is its own Nanda Devi. With a nuclear strike capability, a small island nation like the Bahamas could hypothetically be equal in some sense to a nation multiple times its size and military strength. Instead of a mountain peak, the warhead embodies the protector. A defence advantage to be gained, and a gained ability to protect the land against any adversaries.

The idea of mutually assured destruction that results from nuclear proliferation is both a blessing and a curse. On one hand, it keeps nations at bay, knowing that if one strikes, the other may strike back. As North Korea shows, nuclear arms in the hands of a volatile nation carry a grave danger. Nuclear deterrence is a game of meekness. Some actors on the world stage can get a bit unchained or unpredictable after getting intoxicated with power.

China had metaphorical alcohol poisoning from power during the Cold War era. In addition, it was a regional threat to Central and South Asia. Intelligence agencies of the Western Bloc desired tangible analysis on the strength and capabilities of the Chinese military machine. They also looked into the new field of professional intelligence and sparked innovation in the development of tradecraft technology.

Being the time of the Cold War, nuclear arms were the flavour of the era, and the nuclear armament of communist China was a genuine issue that had a high probability of eventually taking place. In 1964, fears turned to reality when the Chinese government conducted their first nuclear test in the Gobi Desert of the Xinjiang province.

The CIA took a particular interest in the test and developed an unconventional way to monitor future ones. Agency sights shifted to the summit of Nanda Devi, whose proximity to Xinjiang province and towering altitude made it an ideal spot for a nuclear detection system. An “Eye of Sauron on the Tower of Barad-dûr” in its own strange way.

With nuclear proliferation comes the need for detection. Early warnings for launches give a potential target a chance to prepare or go the scorched earth route and respond. Of course, in intelligence, there is a strong utility in having a way to detect the operations of a nation’s nuclear program, whether it be testing or development. Since the cold war, different states have developed various systems to aid in such matters similar to the CIA’s desired use of Nanda Devi.

The current system used by the US Department of Defense (DOD) and Department of Energy (DOE) is the Nuclear Detonation Detection System (NDDS), which comprises separate modules that unite into one ecosystem.

GPS satellites with nuclear detection capabilities have been in orbit since 1963. These satellites carry onboard instruments that are sensitive to multiple phenomena and can sort through said phenomena in order to determine what is natural and what is of nuclear origin. Phenomena include gamma rays, light, x-rays, neutrons originating from a nuclear explosion, and the way those energy outputs interact with the atmosphere, as annotated by the Los Alamos National Laboratory. There is currently an entire fleet of satellites orbiting the earth that provide 24/7 detection for relevant US agencies.

A ground control element transmits and processes all data from the satellites through a Ground NDS Terminal (GNT). A software element called the Integrated Correlation and Display System (ICADS) also processes it. Then DOD operators further analyze and compile into an intelligence product. They then submit the product up the chain of command.

The ocean–another last frontier–is also the home for a global NDDS. According to the Comprehensive Nuclear-Test-Ban Treaty Organization (CTBTO), there are 11 hydro-acoustic monitoring stations spread globally in eight different countries. These sensors use underwater hydrophone and seismometer technologies. These technologies deliver 24/7 real-time data to the International Data Centre (IDC) in Vienna.

CIA ingenuity led to the development of a more primitive system than described above, for the 1964 Nanda Devi mission. Instead of launching a satellite into orbit or laying data cables off a ship into the deep sea, a traditional alpine style climb was on the docket.

According to Mint, “Installing the device… meant carrying up equipment weighing around 56kg, including an 8-10ft-high antenna, two transceiver sets and the most vital component, a system for nuclear auxiliary power (SNAP) generator.” The SNAP was crucial, for it contained seven plutonium capsules in a specialized container that provided the nuclear fuel.

On the 14th of October 1965, the Indian and American climbing team reached Camp IV at 24,000-ft point, in which case tragedy struck as a blizzard.

Fortunately, the climbers reacted quickly enough and descended into a nook in the mountain, where they could hopefully outlast the storm. But while it prevented the loss of life, losing gear was a different story. The team failed the mission and had to abandon the equipment at the highest reached point. Abandonment included the highly radioactive nuclear fuel for the SNAP. A team returned the following year, with much dismay, could not locate the lost materials. To this day, they remain lost.

One more legend to embody the mountain.

The apparent advancement of NDDS technology between the Cold War and today is truly remarkable. Fortunately, there is no longer a requirement to risk lives for mountaineering. Neither is there a necessity anymore to mishandle radioactive materials in a land of natural beauty. The Nanda Devi expedition may have had good intentions. Instead, the expedition left behind a potential for serious health and environmental issues within local communities.