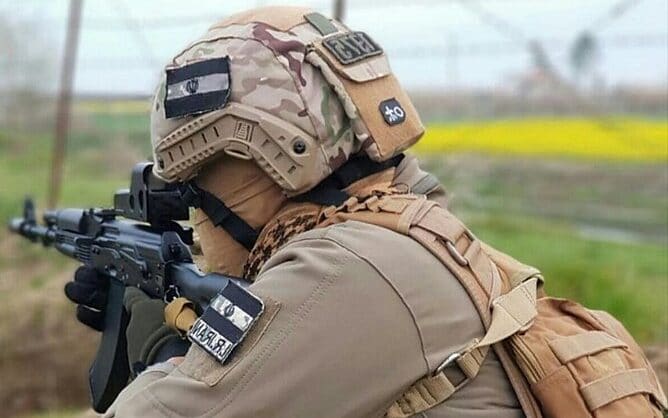 NOHED “airborne special forces” Brigade, established in 1959 as part of the Imperial Iranian Special Forces. US Special Forces during the 1960s before the 1979 Iranian Revolution trained the group. Iran mainly utilised NOHED in the Iran-Iraq War (1980-88)

Colonel Holako Ahmadian led the group. The brigade is the most elite of Iran’s special forces units. On April 4th, 2016, authorities officially announced that NOHED was present in Syria to support the Assad government in the Syrian Civil War. The official narrative was for “advisory” deployment

Unofficial sources of high fatalities suffered by the unit increase the unlikeliness of this narrative. Iranian General Ali Arasteh supported this assessment. He stated that commandos and snipers from its armed forces could be used as ‘military advisors’

NOHED’s roots back to 1953, when Imperial Iranian Army officers participated in parachute training in France. The Parachute Battalion was established in 1959, a reform of the Parachute Unit established by the French-trained officers. This unit became the 23rd Airborne Special Forces Brigade in 1970, adopting the America style green berets. The unit badge even mirrored almost identically (before the Iranian Revolution) the US Army Special Forces’ De oppresso liber insignia. This was a result of the US sending four operational detachments of special forces operators to train Iran’s military personnel in the 1960s. Part of this training included Iran’s 65th Airborne Special Force Brigade, which is now called the 65th NOHED Brigade, a key component of Iran’s special forces. The brigade is split into four key units, hostage rescue, psychological operations, support, and irregular warfare.

Passing training for Iran’s special forces unit, nicknamed ‘powerful ghosts’ within the Iranian military, is extremely difficult. Those that pass the initial parachute training spend periods of training in deserts, forests, snow, sea, and mountains. This stage aims to cultivate the capability to effectively engage adversaries in any given environment. Upon obtaining the necessary points in this stage, the specialisation stage begins. For example, the Hostage Rescue Unit (Unit-110) would likely involve emphasis on breaching and bomb disposal. Another section of the training involves espionage, reconnaissance, and telecommunications, as well as irregular warfare. This provides the capability for guerrilla warfare. These characteristics allow the utilisation of NOHED in hybrid/irregular warfare (Iraq, Syria) to meet the Iranian state’s objectives. With approximately 5,000 personnel, a 2019 Defense Intelligence Agency Iran Military Power report stated the NOHED brigade is the most elite of Iran’s special forces.

Throughout the Iranian special forces unit’s history, the NOHED Brigade established its reputation within Iranian military circles with actions carried out in theatres of war:

There are various unconfirmed reports of clandestine operations in Afghanistan and Pakistan. Nonetheless, it is unclear to what extent the irregular warfare capabilities of this unit took place throughout recent history.

The Syrian Civil War 2011 led to Assad’s government, opposition groups, foreign proxy forces, Kurdish Syrian Democratic Forces (SDF), and Islamic State forces locked in an ongoing conflict. One of many countries involved has been Iran, providing the Assad government with monetary, logistical, military, and diplomatic support. In April 2016, Iranian Brigadier General Ali Aratesh informed the Tasnim News Agency that advisors from the 65th NOHED brigade were stationed in Syria. Meaning it is likely Iran’s special forces unit were present as early as 2011-12 when Western intelligence officials stated that 150 members of the Iranian Revolutionary Guard Corps (IRGC) were present in Syria to support Assad.

On April 10th, 2016, reports claimed that belligerents assassinated a sergeant from the NOHED in Syria. Since then, Iranian activity has increased significantly in Syria. Unconfirmed reports relay at least 30 NOHED members killed in 2016 alone. Iran utilises Shiite combatants from Afghanistan, Iraq, Pakistan, as well as the notorious Hezbollah proxy. The Iranian backed military forces control the outskirts of Damascus, with multiple bases across Syria. Syria is suffering from an ongoing war within a highly volatile environment and numerous interests. It is within this irregular environment that the NOHED brigade has been trained to operate and will undoubtedly be utilised.