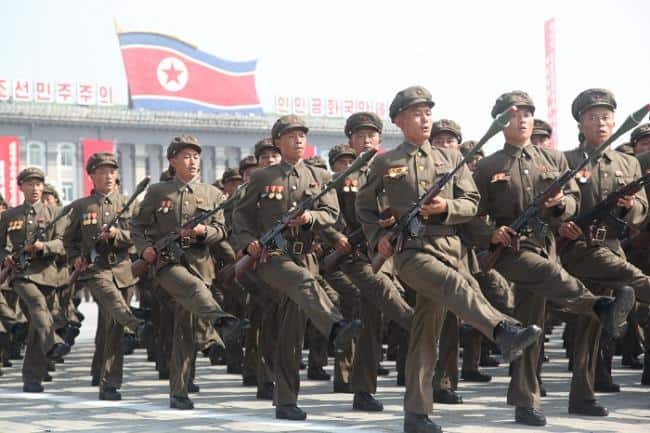 This report seeks to offer an assessment of North Korean small arms proliferation and identification, with a focus on Africa.

In 2006, in response to the first nuclear tests by North Korea, the UN arms sanctions regime commenced against the country. Following this, in 2009, the embargo was extended but still did not cover import and export of small arms to and from North Korea until 2016. Since the embargo is long-standing, the North Korean government has become inventive and adept at circumventing the embargo, providing services, materiel and exporting to other countries. This helps their government to obtain much needed foreign currency that is used to support the regime, and its missile and CBRN programmes.

Following the armistice in the Korean war of 1953, the DPRK has pursued a policy of self-sufficiency where possible in defence procurement – if it could be made in North Korea, then it would. The result of this has been a build-up over the past 70 years of assorted arms of all kinds. Domestically, North Korea’s older small arms are gradually being replaced by newer variants – the Type 68 (essentially an AKM) is being replaced by the Type 88 and 98 (unlicensed copies of the AK-74, not much seen outside the DPRK).

This leaves the North Korean military with stockpiles of small arms ideal for export in the international market. Users will already be highly familiar with North Korean Soviet-era arms and will have logistics in place to supply munitions and spare parts for such arms. Additionally, as arms are not new or built for specific customers, they are nearly indistinguishable from pre-embargo small arms once they arrive in the target country, a distinct advantage for sanction busting.

North Korea can export its large stockpile of historic small arms, which are indistinguishable from North Korean small arms exported before the UN embargo.

North Korean involvement in arms and small arms proliferation extends beyond simple export of items to countries. For the right price (usually lower than competitors) North Korea offers services to help set up armouries, small arms factories, propellant factories, and doctrine services from a military-industrial level all the way to military training for the end-users.

North Korea’s defence exports market is a niche market. It specialises in servicing ageing and obsolete Soviet-era equipment at bargain prices for countries with few other options. Ethiopia, soon after (and in contravention of) sanctions that began in 2006, bought tank parts and munitions from North Korea, citing a need to sustain Soviet-era weaponry on a tight budget. Price is a major factor; on one occasion, the Ethiopian State Minister of Defence explained that purchase of lubricant and ammunition chemicals from North Korea was 50% cheaper than the Chinese offer, despite lower quality.

Certainly, clients in Africa seem happy to accept lower quality for a far lower price. North Korea’s niche also exists in supplying other pariah states unable to buy elsewhere. This list includes Syria, Iran, Cuba, and the DRC. This niche may not exist in the future, however. North Korea has some native capability to develop and upgrade new weapons, but is still heavily reliant on Soviet and Chinese technology, and is falling far behind the defence technology of most other countries. The older that this equipment becomes, the more it will become increasingly obsolete and replaced, even by countries in Africa with a small military budget.

North Korean military exports or services have a niche and specialise in Cold War-era Russian and Warsaw Pact equipment. Russian or Warsaw pact vehicles and equipment across Africa may be serviced or repaired using North Korean expertise and spare parts. This niche may be closing with time, as North Korea falls further behind technologically, and the equipment it specialises in servicing is replaced.

Identification of North Korean small arms and munitions can be difficult – not a huge amount of information exists as you would expect from nations and clients that wish to be secretive about their dealings. Some munitions that have been found, are even unmarked, such as a shipment found off the coast of Egypt of some 24,384 disassembled PG-7 HEAT rockets for the RPG-7, along with materials for a further 4616 rockets. The munitions were hidden on the Jie Shun, sailing under a Cambodian flag, underneath 23 tonnes of iron ore. The PG-7s were listed as assembly parts for a water pump. They had no markings to indicate that they were from North Korea: see figure 1.

North Korean small arms, however, often have markings indicating that they are of Korean origins, such as Korean letters, and certain small peculiarities unique to North Korean versions of weapons. Type 68 has a number of these features, such as a star with a circle around it: see figures 2 & 3.

Type 68 also has another unusual feature: a rib or indent in the trigger guard, seen more clearly in figure 4, but also in figure 2.

North Korea has a large stockpile of historic small arms no longer needed for North Korea, yet that could be exported due to its manufacture date predating the embargo. There is not a huge amount of evidence to show that this is happening on a large scale, however. North Korean small arms or munitions are difficult to identify for a non-expert, and not much information exists on them, though they have some recognisable features, however.

More important to North Korea is the services it provides to African countries, setting up military-industrial capabilities and training African militaries and police forces. North Korean defence exports exploit a niche market – customers on a tight budget with Soviet-era equipment. This niche may be closing with time, as Soviet-era equipment is gradually replaced in Africa, and North Korean military technology becomes increasingly obsolete.