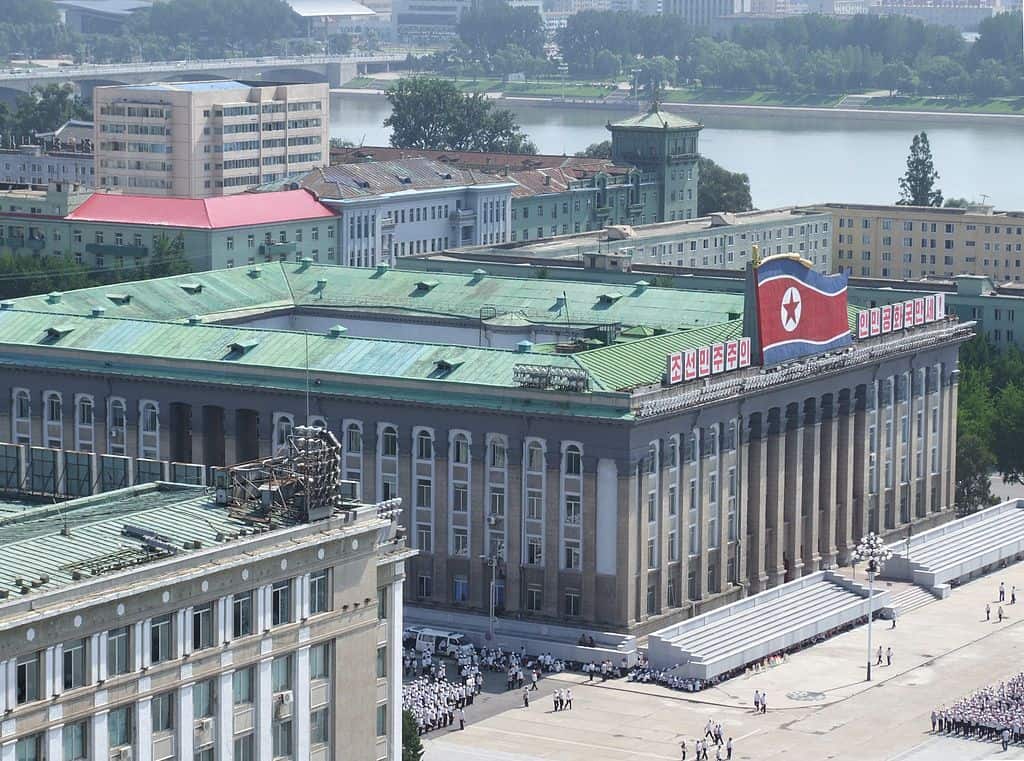 Office 39 is also known as Bureau 39 or Room 39. Kim Jong-Il created the organisation in 1974 as an additional revenue flow for the regime. The North Korean regime unofficially uses Office 39 as the primary substitute to its formal economy. The authoritarian nature of the regime, together with sanctions, pressures North Korea to secure stable forms of financing.

The North Korean regime faces sanctions targeting its economic and trade activity since 2005. Activities like money laundering through Banco Delta Asia became the focus of criticism. The importance of nuclear and military capabilities to North Korea reinforces the need of maintaining a separate flow of capital. As a consequence, Office 39 is used to circumvent sanctions.

The illicit nature of Office 39

Illicit activities form part of Office 39 since its creation in 1974. The agricultural department of the KWP forced citizens to engage in ‘Pomyong’. This was, in essence, leasing a third of a village or property’s natural terrain for poppy seeding. Ultimately, the poppies collected ended in processing centres where opium would be distributed. Trafficking opium is an example of the degree of state control over illicit activities.

Apart from the trafficking of narcotics, Office 39 is involved in money laundering, weapons trafficking and counterfeit goods. The regime’s financial alternative behaves as a criminal organisation focused on profits under the control of a state.

Office 39 is the organisation that runs an autonomous financial network maintaining the regime. Defectors in 1997 suggested that eliminating this financial body was ‘effectively killing Kim Jong-Il’. In 2013, South Korean media reported $5 billion stored by Kim Jong-Un in 7 different countries.  Due to this, Office 39 is almost certainly a crucial factor explaining the adaptability of the regime to international sanctions.

The organisation uses a combination of state officials, civilians and foreign nationals to generate revenue with licit and illicit activities. Operations are ultimately in control of the regime leadership, despite the increased presence of civilians and non-KWP personnel. The centralised control over activities while using state and non-state officials increases reliability and decreases accountability.

The leader of the regime, structurally, is directly connected to Office 39. this case Kim Jong-Un although previously to Kim Jong-Il. The clandestine financial source of the regime enjoys a separate condition from other departments within the KWP. Within the KWP, the Finance and Budget department reports to officials of the KWP before the regime leadership. Office 39 sits above the KWP. The same individual heading the slush fund directs the Organisational and Guidance Department (OGD).

The OGD is responsible for adopting party and policy direction. It is an ideological branch controlling the KWP. The OGD supervises all branches of the KWP and other governmental divisions, including the Korea People’s Army (KPA). It is a likely indicator of shared power that both the OGD and Office 39 enjoy the same status as specialised departments. The activities of Office 39 are therefore likely present within all departments of the KWP and ensure a greater capability of economic collection. The state uses the slush fund through all its channels to maximise profits and protect operations using national resources.

Within the OGD, ‘Bureau 39’ likely reports to Shin Ryong-man. In turn, Ryong-man likely answers to superior officials or to Kim Jong-Un himself. Alleged reports of Kim Yo-Jong leading Office 39 are likely misleading. Instead, there is a realistic probability that Jim Yo-Jong acts as an intermediate figure between Kim Jong-Un and Shin Ryong-man.

‘Bureau 39’ is structured, consequently, as a large-scale criminal organisation. Being crucial to the regime, Office 39 uses state capabilities to maximise profits, almost certainly avoiding efforts of deterrence. Diplomatic, civilian, and military branches of government collect funds through illicit means. For example, funds are collected through the intelligence agency, the Reconnaissance General Bureau. The officials are instructed to obtain economic profits from the leadership.

State capabilities are almost crucial for the survival of Office 39. Embassies and their staff export counterfeit money such as the ‘supernotes’, forged $100 bills extremely difficult to detect. The same embassy attacked in Madrid by Free Joseon likely serves as another post for the bureau. The export capabilities, consequently, linked the IRA and Asian crime syndicates as clients for counterfeit currency operations.

Weapon and drug trafficking are likely to have a dual-use to the regime. On the one hand, illicit operations of weapons and drugs attract the finances necessary for the leadership. Simultaneously, the export of drugs and weapons puts pressure on foreign states. A weapon shipment, for example, was flagged in Thailand in 2009 heading towards the Middle East. Contrary to counterfeit and money laundering, there is a short-term threat to drugs and weapons trafficking.

Economic and sanction-based measures are unlikely to deter long-term activity. C4ADS reported in 2018 that current sanctions, using the example of luxury goods, are ineffective against trafficking measures. The weapons shipment flagged in Thailand, specifically, used 16 different front companies to disguise its origin. Measures against Bureau 39 likely serve a short-term purpose, until the regime uses another official to adapt the methodology and continue operating.