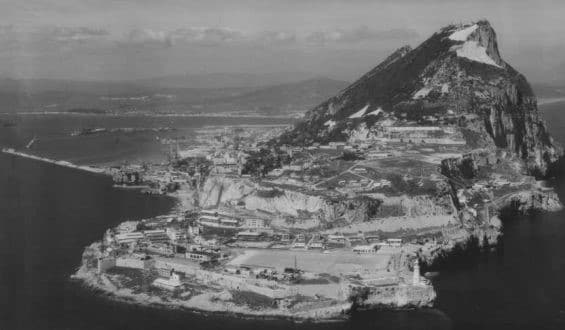 Operation Felix took place in 1941. It is no surprise that Gibraltar is in the eye of the most powerful people. Located in the Iberian Peninsula, a 6.7 km2 territory, it is the key to the Mediterranean.

In 1940 most believed that its strategic position in the Mediterranean would place it in the front-line of the enemy. For that reason, the government built constructed. Gibraltar transformed into a fortress. At North Front, beautiful gardens, racecourse and the football and cricket pitches disappeared to create an airfield. The goverment constructed miles of new underground tunnels and chambers. This transformed the limestone rock into an underground city with telephone exchanges, barracks, stores and even fully equipped hospitals. The invasion of North Africa on the 8th of November 1942, was launched from Gibraltar. Operation Torch would lead to the defeat of the German army in Africa. This in turn gave way for the invasions of Sicily and Italy. It regularly drew air attacks by Italian and Vichy French bombers as well as sabotage raids by Italian naval units.

Spain joined the Anti-Comintern Pact of November 1936. Franco had no second thoughts to declare neutrality when World War II broke out. Fearing that ‘El Caudillo’ could succumb to German pressure, the British sent a new ambassador to Madrid. Ambassador

Sir Samuel Hoare’s mission was to plan the evacuation of the people of Gibraltar. He planned to try to help prevent Spain’s joining the German side. Meanwhile, the German hope was that Franco would declare belligerency after resolving its country’s economic difficulties.

Among those in the German High Command was Admiral Wilhelm Franz Canaris. He was the head of the Abwehr, the German military intelligence. Canaris was in charge of planning Operation FELIX. He mastered Spanish and was fascinated by Hispanic culture. Later on, his ‘double life’, led him to his execution in April 1945.

Canaris arrived in Spain on the 23rd of July 1940. He and army officers in civilian clothes and false passports entered Spain through different routes and established themselves in three houses in Algeciras, six miles west of Gibraltar. Canaris then requested maps of the British defence system at Gibraltar to the Spanish military. Spain’s questioning of the plan was based on the fear of a British invasion on the Canary Islands, its economic woes and the simple strategic difficulty of a surprise attack. The reconnaissance team concluded the outlook was not helpful.

Despite this, Germany started working on a plan. Hitler approved Operation FELIX on the 24th of August 1940. Franco agreed to participate as long as his team would meet his material demands. Canaris believed that Franco would only join the plan once Great Britain was on its knees and advised that a personal visit by the Führer would be essential to ‘work on it as they played a cat-and-mouse game.

On the 23rd of October, both leaders met in Hendaye. Conducted by interpreters, the meeting would last for almost nine hours. With Franco wanting too much and Hitler having little to offer, and after hours of heated negotiations, they produced a secret protocol. Under this agreement, Franco vowed to enter the war at his own convenience. Hitler promised to meet Spanish economic and territorial demands. The only condition was that France could be compensated at the expense of the British. Nonetheless, negotiations lasted until 1941.

On the 12th of November 1940, the Operation Department of the Wehrmacht actioned Directive No.18, which contained the change in German strategy and included the assault on Gibraltar.

On the 7th of December 1940, Franco rebuffed Hitler again after Canaris counselled Franco to not join the war. The Spanish leader was aware of the German defeat to achieve air supremacy in England and the Italian position in the Balkans was getting worse by the day and once again reminding Hitler that Spain would only enter when Britain was on the verge of defeat.

After many letters back and forth, ‘El Caudillo’ sent a letter on the 26th of February 1941, professing his loyalty to the Axis Powers but reminded Hitler that recent events in the Mediterranean theatre left their Henday understanding ‘outmoded’. Hitler put Operation FELIX on hold.

Under the command of Field Marshal Walter von Reichenau, the German plan called for two corps to move into Spain in the middle of January 1941. They would cover the flanks of the Gibraltar assault against any British intervention with the XXXIX Corps, whilst General Ludwig Kuebler’s XLIX Corps would control the actual attack on the Rock.

The assault would be comprised of:

Staging areas set on the Spanish border near Bayonne and crossed the frontier with an initial air raid flying from Bordeaux against British vessels. At the same time, the rest of the aircraft would transfer to air bases at Seville. Barrages scheduled to knock out every defensive emplacement on the Rock. German artillery would methodically demolish casemates whilst smoke-generating units shrouded Grossdeutschland and the 98th Regiment. The Brandenburgers, disguised as sailors abandoning a sinking ship would intend to land inside British defences in small boats and clear the way for the assault troops.

Britain’s reaction to FELIX was the formation of the 128th Liaison Delegation Party in early 1941. Their mission was to help Franco resist the Germans in the event of an invasion. Upon arrival in Gibraltar, the team became known as the Joint Intelligence Centre.

Although the operation never materialised, it is worth understanding why Hitler once said ‘we should have gone for Gibraltar’. The decision to postpone Operation FELIX for another occasion would cost Germany dearly during the course of the war.

End of Felix and Birth of (non-implemented) New Plans

With Operation Barbarossa looming and units transferred to the east, Operation Felix amended to become Operation FELIX-HEINRICH. German troops withdraw from the USSR to capture Gibraltar when they reached the Kiev-Smolensk-Opotschka.

Then came Operation ISABELLA in April 1941. The objective was to measure which German troops would advance into Spain to support Franco in case of a British invasion. In May 1942 Operation ILONA (renamed GISELA), replaced ISABELLA.

In 1943, Operation NURNBERG replaced GISELA. This was a contingency plan in the Pyrenees in the event of Allied landings in the Peninsula.

None of these operations took place finally. In regard to Spain, only two reinforced regiments and certain labour formations were still active.