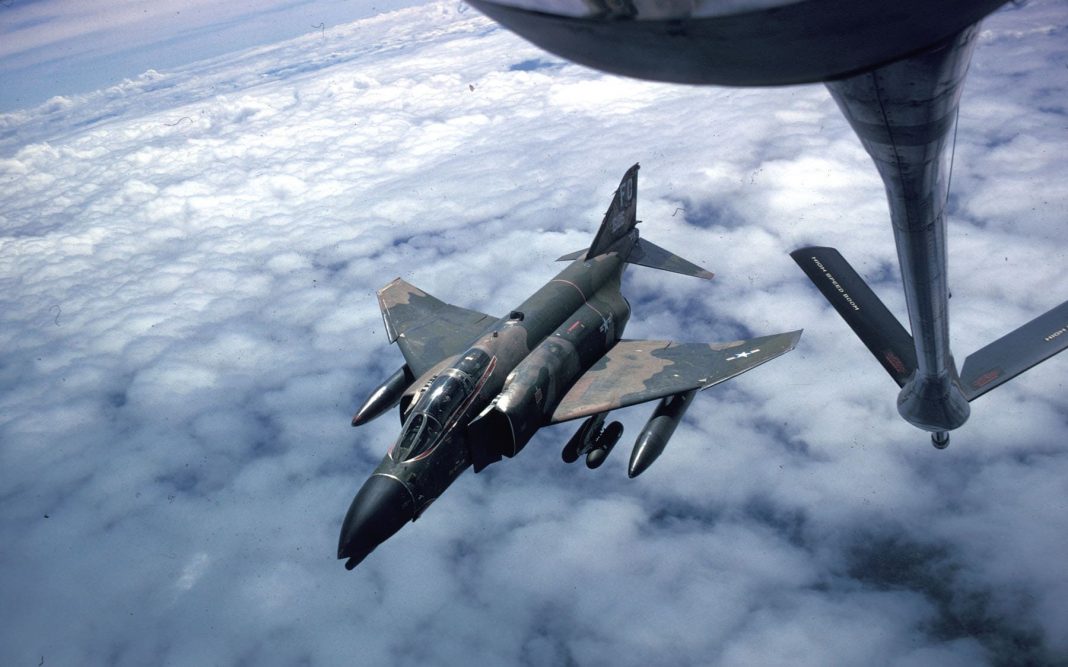 Operation Rolling Thunder was the near continuous bombing campaign of the US military and the Vietnamese Airforce against North Vietnam during the Vietnam War.

Airpower itself is far from controversial. It wins modern wars, and the US is its most prolific user. When the gods of aerial firepower hear the United States Armed Forces cries of summoning, their roaring peals of aggression do not cease-fire.

Given that, we like to think of the service members behind the airstrikes as noble and just, but sometimes there is grey mixed into the black and white nature of war, often portrayed by American media.

In essence, Rolling Thunder is the brainchild of the men in suits, in collaboration with the men in fatigues. By the operation’s end, the very nature of war will come into question. What is necessary? To what end? At what cost?

The skies above the White House darken

Years before Operation Rolling Thunder ran its first sortie, conditions in Vietnam were being set. The U.S. government knew of the communist threat to South Vietnam not long after World War II. From the moment Ho Chi Minh launched the August Revolution in 1945, US intelligence agencies watched the region.

In response to the growing threat, the US increased its support for the anti-communist South Vietnamese in 1962. This came primarily through air support. The North Vietnamese were gaining viable strength. Consequently, morale in the South was low.

Although the US was wary of entering a full-scale conflict, providing air support was a proper step in bolstering both the South Vietnamese anti-communist forces. (source)

Fire missions increased along the Ho Chi Minh Trail, a crucial web of ratlines used for troop movement and logistical support by the Viet Cong and the North Vietnamese. Johnson wanted to hit them where it hurt and disrupt their ability to move and flourish. In response, the communists rose to the occasion and increased their own attacks on the U.S., thus bringing America out of conventional combat hibernation.

Given these points, a group of motives presented themselves before Johnson and his Defense Secretary, Robert McNamara. In consultation with the defense side of the house, and through the political weeds that grew outside the Pentagon’s walls, they created a plan.

In due time, Operation Rolling Thunder grafted into the branches of war that were growing with prejudice.

Operation Rolling Thunder was a large-scale air assault with multiple purposes and targets. In contrast to the textbook “shock and awe” approach to air, the benefactors performed a more gradual escalation.

President Johnson’s personal writing after the war revealed his mindset leading up to Rolling Thunder. In his eyes, bombs were “political resources for negotiating a peace.” Planes and munitions were “carrots for the South, strengthening the morale of the South Vietnamese and pushing them to clean up their corrupt house.”

Also, for the North, bombs were “sticks,” intended on “pressuring North Vietnam to stop its aggression against the South.” (source)

The operation began on the 2nd of March 1965 and concluded on Halloween 1968. Five distinct phases took place, each with their own goals: (source)

The statistics at the end:

The Vietnam War is the first major loss in American military history. Not only is it a devastating loss on the battlefield, but is likewise a loss in the public sphere. Protests and counterculture mark the Vietnam era in the US (with no shortage of banging tunes, mind you).

In the years after, scholars and military officers have studied the after-action reports, testimonies, and literature surrounding the Vietnam War. Ultimately, they want to make sense of the defeat and see where the US went wrong. In her book Political Tribes, Amy Chua writes,

“Fifty years later, the question remains: how did superpower America, with its formidable military, lose to what Lyndon B. Johnson called “a piddling, piss-ant little country” – or, actually, half that country?”

To take it further, how did that superpower do so, despite dropping close to 1 million tons of bombs on a less advanced force?

Looking through the lens of contemporary history, scholars and strategists consider Operation Rolling Thunder a failure. By and large, masses of civilian causalities and volumes of damage to Vietnamese infrastructure plagued the U.S. occupation.

In response, the North used the destruction to their advantage. They crafted anti-American propaganda messages that further painted U.S. troops as a barbaric and unruly force worthy of Vietnamese hatred.

According to the CIA, there were 42,800 North Vietnamese civilian causalities between 1965 and 1967, which their report labels “small, however, in relation to the population of 19 million”. The number was anything but small for communist propaganda. (source)

The slow build of the campaign is another point of critique. Stephen W. Wilson writes, “The existing military theory of gradualism, advanced by Gen. Maxwell Taylor, USA, held that an enemy’s actions could be controlled by the gradual application of force.” Wilson then blames the failure of Operation Rolling Thunder not on-air power, but as “a result of the decisions made by civilian and military leaders”. He cites Clausewitz, stating “gradualism was unsuccessful because it denied air power its inherent advantages of flexibility, surprise, and concentration of forces across time.” (source)

Viewing Operation Rolling Thunder through the eyes of a cynic is like looking through a fortune teller’s orbuculum and seeing the Global War on Terror.

Overall, the blunders and failures of the U.S. government bred the Vietnam War, and cursed the wars to follow. The two Great Wars had clarity in purpose, yet the Cold War failed to find it.

Starting in 2001, the U.S. launched a military campaign on a primitive enemy force, with obscure and undefined end-goals and a drastic under-estimation of the enemy’s will to fight and endure.

This time, air support was once again a key part of the combined arms machine. For two decades, the US-led NATO coalition dropped bombs in dusty battlefields in the Middle East and Central Asia. In like fashion to Vietnam, warfare continued to develop, and the U.S. military-industrial complex grew. In return, battlefield catastrophes led to private-sector research, development, and profit.

However, the U.S. lost. Because of this, confusion and pain lives amongst the veterans of the GWOT, as well as the civilians of Iraq and Afghanistan, who feel betrayed by the nation that promised them liberation.

Operation Rolling Thunder and the GWOT are similar in that regard. They are now lessons learned, with the latter still letting the dust settle as it enters the solemn realm of hindsight.

In the poetic and righteous words of the great Buffalo Springfield,