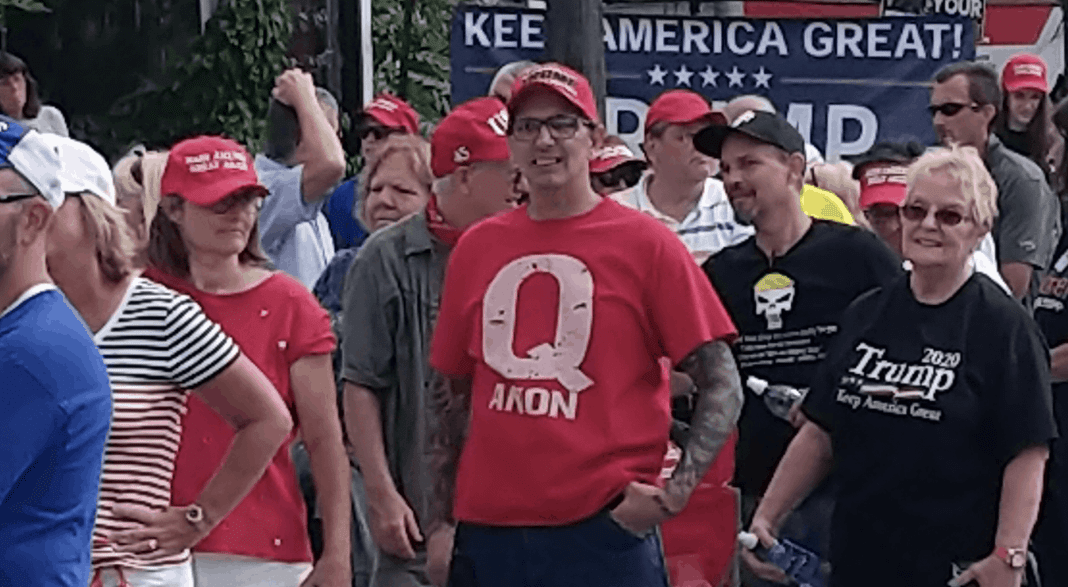 QAnon finds its origins in a complex behemoth of an idea/conspiracy/ideology/borderline-cult that exists on the fringes of the political spectrum. Under its tent dwells a cornucopia of classical conspiracy theories that have morphed into a movement that has swept the United States. There are a multitude of angles that intersect when examining QAnon, and for the sake of simplicity, we will start at the beginning with an infamous online imageboard. The website known as 4Chan.

What do anonymous online imageboards, rogue high-ranking government officials, pseudo-cryptography, the deep state, satanic sacrifices, The Matrix, the President of the United States and Pixar movies have in common?

To the uninitiated, the abstract nature of those listed topics combined is likely hard to wrap one’s head around. However, the mysterious nature of the list reflects the thrilling puzzle of a conspiracy that connects its items together.

That conspiracy is QAnon.

In a striking similarity to the Mos Eisley Cantina from Star Wars, 4chan is the epitome of a hive of scum and villainy residing in the digital wastelands of cyberspace. The website itself, launched in 2003, was the brainchild of an internet entrepreneur named Christopher Poole. Poole designed it as a space to discuss various topics ranging from anime to politics, although with a different model than that of a generic internet forum.

On 4chan, anonymity is paramount. According to the website’s FAQ, “Users do not need to register an account before participating in the community”. Upon arrival at 4chan, a user (also known as an “anon” in short of the default assigned name “anonymous”) is greeted with a minimalistic interface displaying hyperlinks to each imageboard. If you want to participate in the conversation, have the option to either post or reply to a pre-existing one.

Both are done with relative ease without any restrictions. Complete anonymity was the perfect ingredient to corrupt Poole’s well-intended recipe for 4chan. Rampant racism, extreme pornography, and other deviant pictures and rhetoric took over imageboards as time went on. Moderation exists but is only reserved for extreme instances. What those instances are is quite an enigma, for if you were to simply enter virtually any imageboard on the site, you will encounter a pathway to many pixelated images and text that “some would consider to be unnatural” (2-0 with the Star Wars references at this point).

It is not a requirement, but users have an option to create a unique identifier called a “tripcode” further explained in the 4chan FAQ:

“Tripcodes can help verify a user’s identity to others and are a type of pseudo-registration. To use a normal tripcode, place a hash mark (“#”) followed by a word or short phrase after what you’ve entered into the [Name] field (ex. “User#password”). Upon submission, the server will generate the hash unique to that particular word or phrase. The previous example would display “User !ozOtJW9BFA” after being posted.”

Overall, tripcodes allow for a way for users to display a reoccurring identity in an otherwise completely anonymous space. The only thing unique about it is the word that forms the code, so realistically anyone who uses the same word can make the same tripcode. Nonetheless, that concept is of great significance to the origins of QAnon.

4chan is QAnon ground zero, and it all started with this post:

This cryptic post made the claim that on the 28th of October 2017, Hillary Clinton (HRC) would be extradited (where-to a conveniently missing detail) at the hands of United States Marshall’s (US M’s), while the National Guard (NG) will be activated in major US cities in response to prophesized riots and civil unrest that will result in post-extradition. Quite a bold claim to make. Plot twist: it never happened.

The same sort of cryptic message, except this time with more substance and “slightly” more coherency. If an individual is attuned to the world of contemporary political conspiracy theories, they may notice a reference to some of them within the wall of text:

President Trump: “You guys know what this represents?”

President Trump: “Maybe it’s the calm before the storm”

President Trump: “Could be, the calm… the calm before the storm”

*smiles for the camera*

This video would be the origins of the phrase “the calm before the storm”, a common term in the QAnon lexicon. The concept of “calm before the storm” will be elaborated on further along in this article. Now, be mindful that these posts started on the 28th of October 2017. Posts continued to trickle in the 4chan ecosphere, and a buzz was stirring within the digital hivemind. However, on the 1st of November 2017, a shift took place in regard to the identity of the user behind the posts:

These simultaneous posts are the origins of the identity was claimed as enigmatic as it was QAnon!