QAnon: And Then There Was Q 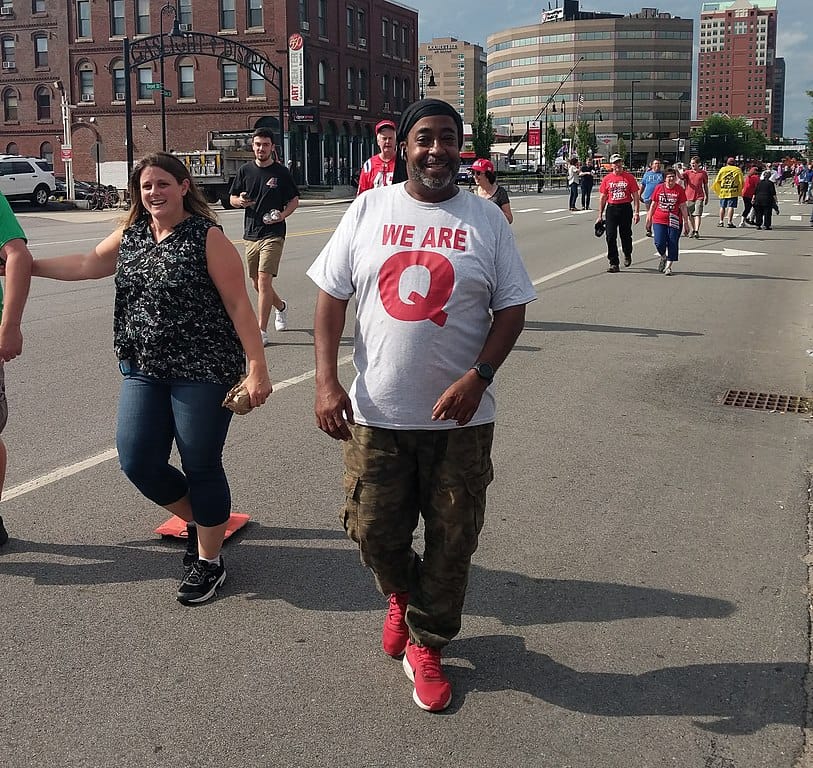 And Then There Was Q

Referring back to the first part of this series, a collection of posts on the 4chan message board are instrumental in the QAnon timeline. The earliest posts were each written with a similar language/syntax structure, and were notably communicated with a rather authoritative textual tone, a tone that could lead one to believe that whoever was behind the posts possessed some sort of secret knowledge about the inner workings of the so-called “deep state”.

Moving forward from the “Q Clearance Patriot” post, the majority of them up to the present time is concluded with a signature “Q” at the bottom. This has become the “official” callsign for the author. The title “Q Clearance Patriot” may not seem to overtly explain much, but there is enough context behind it to establish the figure of Q as a high-level source (within the QAnon community).

According to the US Department of Energy (DOE), a “Q Clearance” is a version of Top-Secret security clearance. Whoever possesses such a clearance has access to highly sensitive information within the DOE, including nuclear weapon schematics, production documents, materials, and other items that could be detrimental to national security if fallen into the wrong hands.

Q has established themselves to be someone who possesses a Q clearance and therefore has an insider perspective that renders his claims to be absolute truth. Q’s posts have become known as “Q drops” or “Q crumbs” (think breadcrumbs), and a dedicated following, a political cult with reported numbers in the hundreds of thousands, has dedicated themselves to researching, deciphering, and spreading the ideas of Q.

At this point, there have been 4634 Q Drops as reported by the website “qmap”, a well-known aggregator within the QAnon community that compiles every drop since the beginning. Drops have had periods of stagnation, sometimes weeks in between each one, but it is clear the figure of Q is continuing to work under their cover.

There has been speculation about the true identity of Q, or even the possibility of multiple Q’s, but at this time there has not been any empirical evidence in support of either. Due to an alleged security risk, Q eventually switched over to 8chan, a darker and more sinister sequel to 4chan. If you were not already “channed out” by this point, I will spare you from being so and summarize the main difference.

8chan in a Nutshell

8chan is the same concept as 4chan and was launched in October 2013 by a programmer Fredrick Brennan. Brennan essentially wanted to create something that modelled 4chan yet had even fewer restrictions and more emphasis on “free speech”. Anonymity and tripcodes remain a staple on the website, which allowed for Q to make a smooth transition and conduct business as usual (the exact date of Q’s migration is hard to pinpoint). The Obi-Wan Kenobi quote at the beginning of this article applies to 8chan, with exponential growth on the level of scum and villainy.

8chan has been the subject of internet controversy in recent times, and for good reason. It was where the manifestos were published by the perpetrators before the 2019 Christchurch mass shooting in New Zealand and the 2019 Ponway synagogue mass shooting in California. It has also hosted user-created imageboards involving child pornography and paedophilia and been the epicentre of “swatting” attacks on video game streamers.

8chan’s history and line of scandals caused it to lose its service provider. Each time a new host was found, the website would only remain live for a short period of time before being dropped again. 8chan faded into irrelevance until the fall of 2019 in which case it was relaunched as 8kun. 8kun continues to be operational and is the current primary location of Q drops within Q designated “research boards”.

The Distorted Gospel of Q

With all of the context in mind, it is time to shift gears and focus on QAnon as a whole and what they believe at their core. This alone is very complex and dense, and I feel best tackled by addressing various essential concepts and beliefs within the group/ideology:

“The Great Awakening” is essentially the idea that President Trump is working behind the scenes on a divinely sanctioned mission to expose and destroy a vast and deeply rooted global paedophile ring involving the political elite and Hollywood. Alongside Q, President Trump is essentially another deity on the QAnon pantheon. His infamous tweets are considered to be code and working in tandem with Q Drops to provide anon’s messages to decode and interpret. Opposition to President Trump is labelled as opposition to the mission of Q and the eventual “Great Awakening”.

The concept of the “deep-state” is also commonly referenced within the movement. The deep state is a term that describes a shadowy cabal within the federal government who works in secret to advance their own agenda. This concept is a common staple among conspiracy theorists who use the deep state as a launching point for other theories. QAnon adherents believe that it is essential to spread their message to the public so they “wake up” or get “red-pilled”, an allude to the scene from The Matrix when the character of Morpheus presents the protagonist Neo with an ultimatum.

“This is your last chance. After this, there is no turning back. You take the blue pill—the story ends, you wake up in your bed and believe whatever you want to believe. You take the red pill—you stay in Wonderland, and I show you how deep the rabbit hole goes. Remember: all I’m offering is the truth. Nothing more.”

Q is the red pill, and his drops will take you the promised land. Speaking of which…

QAnon may seem like its own religion at this point, but they have managed to conveniently distort the religion of Christianity into their own highly problematic interpretation. According to Q, there is a highly satanic influence behind each claim of corruption within the government and Hollywood. Politicians are secretly part of a satanic cult that sacrifices children to Satan and harvests their blood and fear in order to give them a form of energy.

Within the QAnon community, the name of that energy is a drug named “adrenochrome”, a chemical compound that carries its own mythology in terms of use and function. In his revered novel Fear and Loathing in Las Vegas, Hunter S. Thompson writes “There’s only one source for this stuff… The adrenaline glands of a living human body”.

In the context of that novel, the substance is used as a recreational drug (among many, many others), but that use of it is purely fictional. According to QAnon, the children that are trafficked in the deep state-operated ring are tortured to death in order to produce the highest level of adrenaline-soaked with fear.

That idea is held in conjunction with Hollywood being equally complicit in grooming children with their content. QAnon commonly looks for satanic imagery and themes within films, music, and television. In terms of adrenochrome, some anon’s believe that the animated Pixar film Monsters INC is a blatant confession of the harvesting techniques supposedly used in real life.

Within the movie, “monsters” living in an alternate reality sneak into children’s rooms at night to scare them, which in return acts as an energy source for their home dimension. This comparison is important to annotate, as it highlights the power of a conspiracy. Monsters INC is only one example of many that QAnon supporters use to dive further into their subscribed ideology.

Some would argue that there are similarities between QAnon and the “Satanic Panic’ taking place nationally in the US during the 1980s. This era was full of claims of widespread ritual sacrifice at the hands of Satanic cults across the states. The phenomenon was heavily debunked but resulted in massive fear and panic within the public.

Outside of the Satanic component, Q often cites Biblical scripture in his drops. There is a heavy emphasis on POTUS being divinely appointed by God to carry out his mission. Statistics are foggy, but there is an ever-increasing population of the white evangelical community within the US that is sympathetic to or a believer in the gospel of Q. It has likewise been highly renounced multi-denominationally as a gross distortion of Christianity, and many American church leaders have begun to reinforce that among their congregations.

If anything, a strong theological argument can be made that Christian scripture is in opposition to the slanderous and confrontational nature of QAnon. Nonetheless, the “Christian” component of the conspiracy is a vital part of its engine.

“Where we go one, we go all”. Within QAnon, this phrase is equivalent to saying Amen. This is a calling card for QAnon members, a rallying cry of sorts meant to reinforce the community aspect and foster a sense of belonging.

QAnon is currently a hot topic in the US media circuit, and there is no shortage of coverage. The upcoming presidential election has placed a fresh target on the group, who critics and commentators consider it to be dangerous, and for good reason.

The power of an idea has the potential to inflict more harm and destruction than even some weapons of war. And while QAnon may seem to be comical or absurd, it has already radicalized swaths of people into believing its claims. Similar to ideologies like Antifa, the Boogaloo Movement, and White Supremacists, QAnon ideas can influence vulnerable and susceptible people. With any sort of conspiracy theory, belief in one can lead to belief in another. And the further along the Q drop path you go, the more of an incentive there is to act.

Similarly, to insurgent Salafists, convincing people that there is a spiritual enemy in opposition to them, their families, and their nation could lead to monstrous acts of violence and vigilantism. If you take QAnon to its logical conclusion, such an act dressed in claims of valour can be justified in the eyes of its practitioners.

Nonetheless, the US is in no shortage of tension, and it is almost certain that tension will continue to grow in the upcoming days. One can only hope that the dark side of the force that Q resides on will be defeated by the light. Until then, there will be no shortage of resources to keep an eye on Q, whoever they happen to be…

Michael Ellmer
Michael is a Senior Intelligence Analyst at Grey Dynamics. He spent eight years as an infantryman in the Marine Corps, with tours to Iraq, Afghanistan, and the Pacific Theater. Upon leaving the service, he completed his undergraduate degree at Seattle Pacific University with a focus on communications studies. He is currently pursuing a master’s degree in Strategic Intelligence Analysis at Brunel University London.