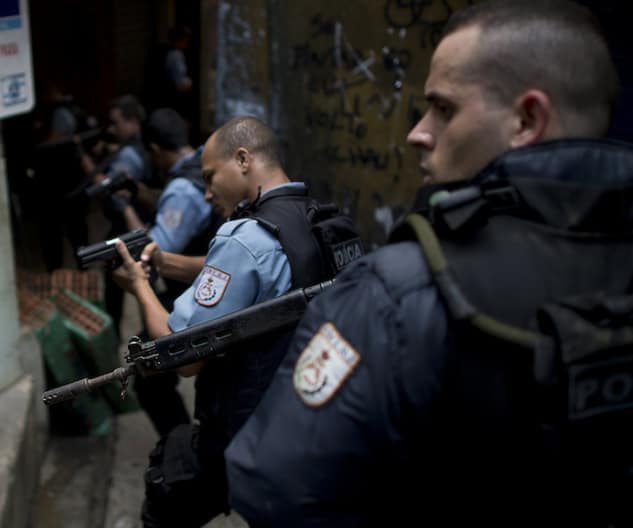 In January 2018, newly inaugurated President Jair Bolsonaro was faced with his first scandal after Brazil’s biggest newspaper linked Bolsonaro’s son Flávio to members of one of Rio’s most notorious militias and crime syndicate. President Bolsonaro campaigned and won the presidency on a hardline platform promising to fight rampant crime and violence. His proposals include making weapons more accessible to citizens and providing Brazilian police more latitude to shoot and kill criminals. The governor of Rio de Janeiro and close ally with President Bolsonaro, Wilson Witzel, deployed police snipers to shoot armed suspects not so long ago.

Flávio Bolsonaro is accused of long-standing ties to a pair of Rio de Janeiro police officers now working for Rio’s militias, the Crime Bureau. Allegedly, Flávio Bolsonaro even employed the wife and mother of one of the former officers as recently as last year. Both of these former police officers were arrested and charged with the assassination of prominent Rio de Janeiro councilmember and activist Marielle Franco, who was shot dead along with her driver in Mar 2018. However, the rising threat of militias in Rio is not a new phenomenon and is not limited to targeted assassinations.

According to Ignacio Cano, from the Violence Analysis Laboratory at Rio’s State University, in his research paper Hidden: The Evolution of Militias in Rio de Janeiro (2008-2011), militias are defined by five criteria:

Beginning in the 1990s, the militias were mainly made up of former police officers, firefighters, and military men who wanted to combat lawlessness in their neighborhoods. Until 2006, the local population and the state considered the militias a third public security force alongside the civilian police and the military police in the fight against drug trafficking. As a congressperson, Jair Bolsonaro called for the legalization of the militias and along with other politicians considered them the lesser evil to Rio’s drug gangs. Starting in 2006, the previously positive perception of these militias changed. Along the way, their brutal methods and control expanded. Today some crime experts argue that militias have become Rio’s biggest security threat.

‘They are more organised than the drug trade for this’

Last year, Rio’s militias came back into the spotlight after the assassination of Marielle Franco. Franco had been an outspoken critic of police killings in the city’s favelas, and her murder drew international condemnation and demands for an independent investigation. She had also recently been named to a council commission overseeing the federal intervention to deploy the military to tackle Rio’s security crisis. A militia group was always suspected of Franco’s assassination. “They have the capacity for this, they have the weapons for this, they are more organised than the drug trade for this,” said Detective Alexandre Herdy, head of Rio police’s organised crime department. Franco’s killers were “professionals, for sure”, he told the Guardian. Two days before the first anniversary of her death, police announced the arrest of two suspects, both alleged to have ties with the Crime Bureau. No arrests have been made of those who ordered the hit.

“The tiger doesn’t climb on top of you, the tiger eats you”

Some security experts believe some of Bolsonaro’s policies could strengthen the militias. For example, he wants to protect police from prosecution in the case of on-duty killings, relax gun laws and in general crackdown on violence with brute force. Claudio Ferraz, a former police investigator on a task force focused on militia cases, told Fox News that complacency would be a mistake. “The tiger doesn’t climb on top of you,” he said. “The tiger eats you.” Bolsonaro is facing growing pressure to explain his family’s alleged links to the heavily armed and notoriously violent militias. Rio’s public security policy is currently focused on drug gangs, but needs to address the phenomenon of the militias. The question is whether this will provide the necessary answers for the murder of Franco in a climate of criminal impunity.

Food Insecurity in the Horn of Africa: A 6 Month Outlook