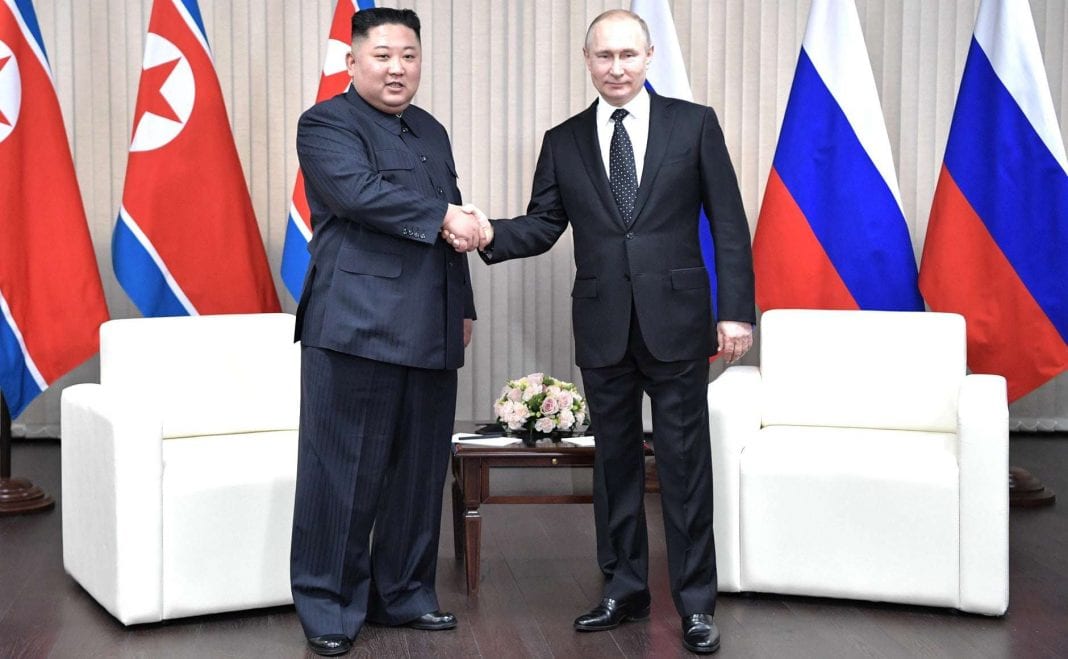 KJ-1. It is likely the political aspect of Russia and North Korea (NK) relations is performative and unproductive.

KJ-2. It is likely Russia and NK’s economic relations will remain stagnant over the next two years, unless there is a drastic removal of NK sanctions or an active demonstration of denuclearization coming from Pyongyang.

KJ-3. It is unlikely the military sphere of Russia and NK relations will remain dormant throughout the next two years. However, there is a realistic probability that condition may change depending on the Biden administration’s future policy.

It is likely the political aspect of Russia and NK relations is performative and unproductive. Compared to NK relations with China, relations with Russia are more tumultuous. Russian President Vladimir Putin and NK Supreme Leader Kim Jong-un had not taken part in an official meeting until the 24th of April 2019, when both leaders attended a summit in the Russian city of Vladivostok.

This summit was the first time the leaders had met since Kim’s rise to power in 2011. According to Artyom Lukin at 38 North, Putin’s interest in the summit “was meant to symbolically reaffirm Russia’s traditional role as a major player on the Korean Peninsula, whose influence on Korean affairs may currently be smaller than that of the United States and China but bigger than that of Japan.”

Kim was in a submissive position on the world stage following the 2019 Hanoi Summit. His willingness to meet with President Trump at a high-profile event projected a “defanged” image of Kim’s aggressive nuclear ambitions. However, the extent of his genuineness in the talks remains unclear. According to Scott A. Snyder at the Council of Foreign Relations, “Kim desperately needed to replace the narrative of weakness after failing to make a widely expected deal with the United States at the Hanoi summit with a narrative of strength, both domestically and internationally. Last week’s summit with Putin allowed Kim to show stature internationally. They also discussed alternatives to the U.S.-proposed big deal on denuclearization.”

Outside of this summit, there have been relatively no public declarations of bilateral partnership. Neither have there been significant signs of strengthened Russia and NK political relations. President Putin mentioned the historical bond between Russia and NK going back to the Cold War. Both of them were members of the East bloc, and “camaraderie in arms”, Putin said during a summit speech. The extent of the meaning behind the speech outside of show has yet to be showed.

It is likely that the economic sphere of Russia-NK relations will remain stagnant over the next two years, unless there is a drastic removal of NK sanctions or an active demonstration of denuclearization coming from Pyongyang. Sanctions have been one of NK’s most crippling financial burdens. The UNSC enforced most of these and most recently by the direction of the now-expired Trump administration. Some of President Trump’s sanctions directly affected Russia by targeting Russian individuals, banks, and companies. UNSC Resolution 2375 imposed “a ban on supply, sale or transfer of condensates and natural gas liquids to the DPRK. IUNSC also imposed a ban on its exports of textiles such as fabrics and apparel products.”

Russian natural gas exports to NK are among the highest of all products. Despite sanctions, they reported Russia to have had a 20% increase in trade exports to NK, including natural gas products. NK does not have products to export that are of any significant use to Russia. This adds a layer of complications to their trade relations among the pre-existing sanctions. According to Andrei Lankov at the Carnegie Moscow Center, “North Korea has a competitive advantage in a very small range of goods in the global market, as is obvious when looking at its export profile. Most of these goods little interest Russia.”

2021 has seen a dramatic decrease in Russian/NK trade. According to Russian Foreign Trade, Russian imports from NK were down 99.2%. Exports downed 100% from the first quarter of 2020. Labour exporting is another interesting aspect of Russia and NK relations. NK has exported labour to the Eastern side of Russia since 1946. Despite sanctions, Russia continues to host roughly 10,000 to 40,000 NK labourers.

The most realistic growth in economic relations over the next two years will likely stem from infrastructure projects. These proposed projects include a natural gas pipeline, electrical grid, and railway system between Russia and South Korea, using NK territory. While that has the potential to bring work and economic growth to NK, it is unlikely to happen unless there is a change in the regional tone. The projects remain uncompleted because of the aforementioned NK sanctions.

It is unlikely the military sphere of Russia and North Korea relations will remain dormant throughout the next two years. However, there is a realistic probability that condition may change depending on the Biden administration’s future policy. Russia does not have a need or motive for military support from NK, and NK has not shown a desire for Russian partnership. Denuclearization provides Russia an incentive to avoid strengthening NK any further, signalling to other world powers that they are a military ally. There are reported mentions of a Russian desire to host a joint military exercise with NK, although nothing has come to fruition. The growing strategic partnership between Russia and China signifies a bilateral leash on NK, as the parties seek a peaceful resolution to the tensions in the Korean Peninsula.

The Biden presidencies infancy makes it difficult to judge future actions, although there have been rumours of resuming diplomatic talks between the United States and NK. The stance that President Biden takes on Russia could have a realistic probability of escalating the military partnership between Russia and NK, including regional joint exercises. If China and Russia feel the US is focusing attention on them militarily, there is a realistic probability there will be a stronger military alliance between the two nations, with NK included as a nation with a strategic interest on the Korean Peninsula.