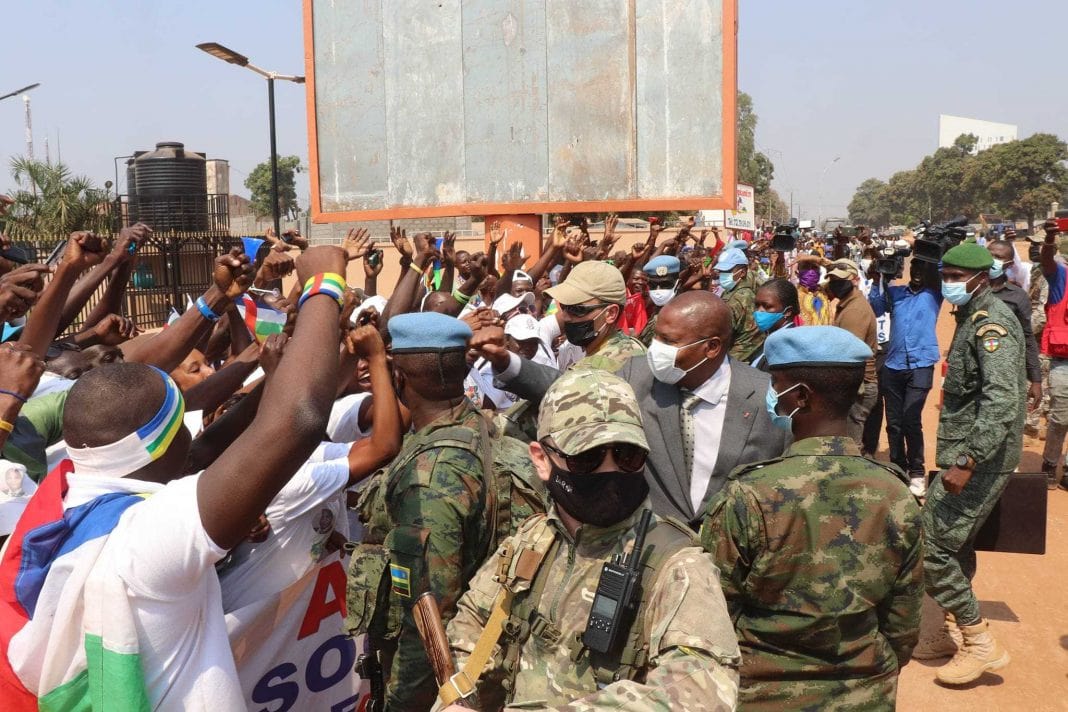 This Grey Dynamics intelligence report will utilize OSINT in order to provide diagnostical and predictive analysis on Russian intervention in the CAR, with a focus on the geopolitical, military, and economic spheres.

KJ-1. It is highly likely that Russia will expand into Africa as part of their ultimate geopolitical goal of becoming a superpower on the world stage. The CAR is currently one of Russia’s close allies in the region and a location of recent military activity.

KJ-2. It is highly likely that Russia currently has a military presence in the CAR by using the Kremlin-backed private military organization known as the Wagner Group as their proxy.

KJ-3. It is highly likely that the economic opportunity in the CAR, and the proliferation of the vast supplies of its untouched minerals and natural resources, is the primary reason for Russia’s interest in the country.

The Central African Republic (CAR) is one of the most volatile and economically challenged countries in the African continent. According to the Human Rights Watches 2019 World Report, armed groups in the CAR have “continued to commit serious human rights abuses, expanding their control to an estimated 70% of the country”. The CAR has been locked in of conflict for a few decades now, but a significant number of the human rights abuses mentioned in that report have stemmed from the symptomatic violence and unrest caused by the ongoing religious civil war between two coalitions of rebel groups: the predominantly Muslim Seleka alliance, and the predominantly Christian anti-Balaka alliance.

Decades of conflict have left the CAR in a vulnerable state and set conditions for an international humanitarian relief effort. According to the United Nations (UN) Office for the Coordination of Humanitarian Affairs, “2.6 million people within the CAR require humanitarian assistance and protection, while 1 out of 4 citizens has had to leave their homes.” To further complicate the situation, the COVID-19 pandemic has added an extra layer of complexity due to the pre-existing lack of medical infrastructure, and difficulty in public education on the virus.

To date, the CAR has been provided humanitarian and military support by its peers in the UN. Likewise, France is one of the CAR’s closest allies despite its historical colonization period up to 1960 when the CAR gained its independence. Although France and the UN continue to provide support in various capacities, the ongoing religious conflict in the CAR has opened the door for foreign exploitation, as it is currently experiencing primarily with Russia.

The Russian ambition to be a world superpower has led to a fixation on African intervention, with the CAR being one of their continental focal points. Russian intervention in the CAR has included economical support, educational development, military training/advising, and the green light for the construction of regional military installations.

In order to examine Russia’s potential intentions in the CAR, it is beneficial to take a broader look at its current foreign policy and geopolitical goals. According to Julia Gurganus and Eugene Rumer at the Carnegie Endowment for International Peace, “At first glance, Moscow’s attempts to create a web of relationships and project influence in Africa, Latin America, the Middle East, and other parts of the world appear to be a new element of Russian Foreign policy.

However, that conclusion would be mistaken. Russian foreign policy has been building up to its present expansive phrase for over two decades.” Furthermore, every action Russia takes on the world stage is calculated and strategic in nature. Russia has had a long-term desire to rise above the fall of the Soviet Union in the later 1980s and become a global superpower. It has recently demonstrated that desire on a smaller scale with its 2014 annexation of Crimea, and with its direct military involvement in the Syrian Civil War in support of sitting President Bashar al-Assad.

It is highly likely that Russia will take advantage of the political and economic instability in the CAR with the intention of furthering their geopolitical goals. In October 2019, Russia took a significant step in demonstrating their interest in Africa when they hosted the inaugural Russia-Africa Summit in the city of Sochi. At this summit, Russian President Vladimir Putin offered the assembled African leaders his allegiance and aid without the political or fiscal conditions often set by his Western rivals. The CAR is one of the recipients of Russia’s allyship, as mentioned in a recent Grey Dynamics article. According to analysis within that article, it is highly likely Russia will seek economic gain and regional dominance through their bilateral relations with the incumbent CAR government.

Furthermore, it is highly likely Russia will try and succeed where other UN countries have failed in terms of mediation between the Seleka and anti-Balaka coalition groups. By doing so, Russia will be in an advantageous position over the West / UN while likely further opening opportunities to operate in an economic and militaristic capacity within the CAR. The West is not the only rival, however. The Chinese have projected their strength and resources into developing weak African nations in parallel to Moscow.

National interests are of the utmost importance to Russia and China, but both countries share a common goal of impede Western influence in Africa and superseding it on the world stage. Nonetheless, Russia will likely use its foothold in the CAR as a Chinese deterrent and strategic move in eliminating China’s looming threat of intervention.

On a global scale, Russia’s most recent military operations have been conducted by both uniformed soldiers and state-sponsored private military contractors. The latter has been the primary proxy force the Kremlin uses to carry out its militaristic goals; specifically, through the Wagner Group, a private company owned by Russian oligarch Yevgeny Prigozhin. The existence and state-sponsorship of the Wagner Group is vehemently denied by the Kremlin but reports and footage of their operations in areas like Syria and Libya have shown an often brutal and unrestrained nature amongst their personnel.

Russia prefers to use the Wagner Group in order to advance their goals without having to take direct responsibility for the outcomes. Likewise, having a foreign reach without identifiable uniformed soldiers helps Russia operate outside the close monitoring of the North Atlantic Treaty Organization (NATO). According to testimony recorded in front of the United States (US) Congress, the Wagner Group is reported to be operating in Ukraine, Syria, Libya, Sudan, and the Central African Republic. Recent unconfirmed reports have claimed they have a limited presence in Venezuela in support of the regime of President Nicolás Maduro.

Due to a recent influx of Russian activity in the CAR, and the recent assurance from the CAR government that Russia can construct a military installation within its borders, it is highly likely that Russia will become the dominant foreign power within the CAR. According to a recent leak from a secret German Foreign Ministry report, The Kremlin has made Africa its geopolitical priority and is beginning the construction of military bases in six African countries, including the CAR.

Prior to that report, Russia already had a military presence in the CAR with both uniformed soldiers and the Wagner Group’s mercenaries. According to an article from Al Jazeera, CAR President Faustin-Archange Touadera is being directly advised by Valery Zakharov, a former Russian intelligence official. When confronted about the matter during an interview with an Al Jazeera reporter, Zakharov formally denied the knowledge of Wagner Group operations within the CAR. Nonetheless, it is highly likely the Wagner Group is on the ground assisting in the training of CAR military personnel as well as providing security for CAR government officials.

Once Russia completes its military base construction, it is likely they will use their positions strategically in support of peace between the Seleka and anti-Balaka groups. Successful mediation would likely bolster Russia’s image amongst the CAR population which would likely result in the CAR favouring them over other countries. If that scenario were to occur, Russia would likely be in a strategic position to carry out their geopolitical goals, as well as exploit the abundance of natural resources within the CAR. Peace between both factions is necessary for the efficient mining, production, and exporting of the CAR’s highly desirable resources (further details in section 3 of this report).

According to the Heritage Foundations 2020 Index of Economic Freedom, the CAR has an “economic freedom score” of 50.7 which makes “its economy the 159th freest in the 2020 Index.” Within the Sub-Saharan Africa region as a whole, the CAR is ranked 36th out of 47 countries on that same report.

According to the Observatory of Economic Complexity (OEC), in 2018, the CAR’s primary exports were Rough Wood ($58.8M), Diamonds ($16.6M), Sawn Wood ($12.1M), Raw Cotton ($2.27M), and Gold ($1.61M). Minerals in the CAR include graphite, uranium, monazite, rutile, salt, iron ore, copper, and quartz. According to that same 2018 report, the CAR exported the majority of their goods to China ($54M) followed by the United Arab Emirates ($6.72M). It is worth noting that the numerical difference between Chinese exports and UAE exports is significant and demonstrates a large Chinese presence in the CAR’s economic sphere.

In accordance with their geopolitical strategy, it is almost certain that Russia’s interest in the CAR is primarily economic gain. It is highly likely that Russia will utilize its military strength and expansion in the region in order to further their economic goals. With China receiving the vast majority of the CAR’s exports, Russia will likely have to establish a positive rapport with the CAR government in order to outweigh the pre-existing Chinese economic foothold.

The military support and advising Russia provides the CAR government can be examined as a potential advantage to China’s strictly economic support. Likewise, the distinct agenda laid out in the 2019 Russia-Africa Summit makes Russia stand out in the diplomatic realm which demonstrates a multifaceted partnership against Chinas mainly economic one.

It is highly likely that the primary economic focus of Russia in the CAR will be directed towards the CAR’s minerals and natural resources that remain highly underdeveloped and untouched. A peace agreement between the Seleka and anti-Balaka is a required first step in ramping up mining operations.

Russia is also a notable force within the global defence trade including 16% of their arms exports between 2014-2019 going to Africa.

It is almost certain that Russia will continue to view Africa as an upmost priority within their geopolitical goals. As they seek to evade NATO and transform into a superpower on the world stage, widespread instability in Africa sets the perfect conditions for Russian exploitation and intervention. By taking their reach a step further with the impending construction of military infrastructure in the CAR, Russia is ultimately solidifying their intentions that have already been previewed with the Wagner Groups openly secret activities within the country.