Libya had amassed a debt of no less than $4.6 billion to Russia by 2008, largely stemming from the Soviet era. President Putin travelled to Libya and met Gaddafi in ’08 and wrote off the entire debt. In return, Russia’s state-owned Russian Railways earned a $3.48 billion contract to build railroads connecting Sirte and Benghazi. Arms deals were signed – in 2010 these deals made up 12% of Russia’s total arms export valued at $10 billion in total.

Additionally, Russia’s favourite son, Gazprom, struck deals with Libya’s National Oil Corporation (NOC) to form a joint project to explore hydrocarbons in the region. Gazprom also holds stakes in the Elephant field after striking a deal with Italian ENI. All deals were signed at the time of Libya’s construction boom in 2008 when Gaddafi was to invest $52 billion in infrastructure projects – projects that Russia had a great interest in.

Instead of becoming an international financial hub for the region with skyscrapers shooting up in the sky, Libya was shot up and sent into a spiral of violence. As Libya’s spiral of violence seems to move towards an end, Russia has come to reinvest and revive frozen contracts. And as we now know, on the African continent – Where there are conflict and natural resources, there is Wagner.

In Sudan, Syria, Ukraine, and the CAR Wagner’s presence is rather well documented by pictures, flight manifestos, videos, and witnesses while mining and security companies can be traced back through the hierarchy of companies eventually leading up to Prigozhin at the top. These operations function as some dysfunctional covert operation that is quite overt, yet provides plausible deniability simply because the link between Moscow and Wagner is not on paper in black-and-white while the private-public dynamic blurs Moscow’s involvement just enough to pull another ‘Salisbury’ – Not referring to the actual poisoning, but to Moscow’s standardised reaction when caught with their pants down; ‘anti-Russian hysteria‘, ‘cheap soap opera’ or notions of similar nature. Libya is quite different, hard evidence is scarce, but indicators and motivation are evident.

In Libya, there are several possible outcomes of the conflict and now planned election, and Russia is hedging. Moscow has hosted several Libyan politicians with conflicting interests and partners, most recent with Gaddafi’s son, Saif al-Islam Gaddafi. But Russia’s number one in Libya is Field Marshall Khalifa Haftar. Haftar made a visit to Moscow on 7 November 2018, to meet with Russian Defence Minister Sergei Shoigu.

The two have met several times since 2017 when they met aboard the aircraft carrier ‘Admiral Kuznetsov’ just off the coast of Libya. Russia did not announce the meeting and seemingly attempted to keep it a secret. Libya’s National Army (LNA) did apparently not receive that memo as they recorded and published Haftar’s arrival and meeting for propaganda purposes. Upon his arrival, the video shows the appearance of no other than Prigozhin.

When later confronted with the video Russian officials dismissed the observation, claiming Prigozhin was there to cater and organize a dinner. However, the recordings show Prigozhin in the meeting with a translation earpiece and nametag, evidently being an equal participant, while Russian media found that Shoigu had left for Kazakhstan before any dinner had taken place.

Some reports have claimed that regular Russian army, GRU operators and Spetsnaz has been on the ground in Libya. This claim contradicts the Kremlin’s current modus operandi (MO). Other reports claim that GRU operators and Spetsnaz forces are on the ground, under the banner of Wagner, technically making them Wagner personnel. These reports are far more viable as it gives Russia the opportunity to deny – which they do.

Meanwhile, we already know that Wagner’s base is shared with GRU and Spetsnaz in Molkino, sending personnel from there to act as agents of the state abroad does not make sense when they can be sent under the cover of Wagner, clearing the Kremlin from any responsibility in case of any unseen problems while concealing their role and intent. Additionally, Putin’s greatest threat is internal opposition and a dead agent of the Russian state overseas could raise eyebrows, a dead private mercenary will not. Wagner is a (close to) risk-free solution to the execution of foreign policy.

Haftar has received military support from Russia since February 2017 when oil terminals in eastern Libya were attacked. The Russian forces, assumed to be elite personnel under Wagner, landed in Mersa Matruh in western Egypt, later observed further west towards the Libyan border in Sidi Barrani with drone equipment. The Russian deployment was confirmed by Egyptian security sources who added that six units from Russia had been flown into Egypt before departing for Libya 10 days later.

Additionally, numerous reports claim that Russia has moved weapons to Haftar through Egypt and that Wagner personnel has trained LNA personnel using the equipment and maintenance of it. It should be noted that state-owned Rosneft, Russia’s second favourite son, signed a deal with NOC, also in February 2017. A source within the Russian Defence Ministry has also confirmed the presence, stating that both civilian and military instructors are in Libya.

In late 2018, around the same time as Haftar’s meeting in Moscow, Ukrainian intelligence released flight manifestos establishing that the same airline unit taking Wagner personnel to Sudan that is mentioned in part 2 of this series, started transiting through Benghazi – Indicating that Libya is an area Wagner personnel are rotating into. 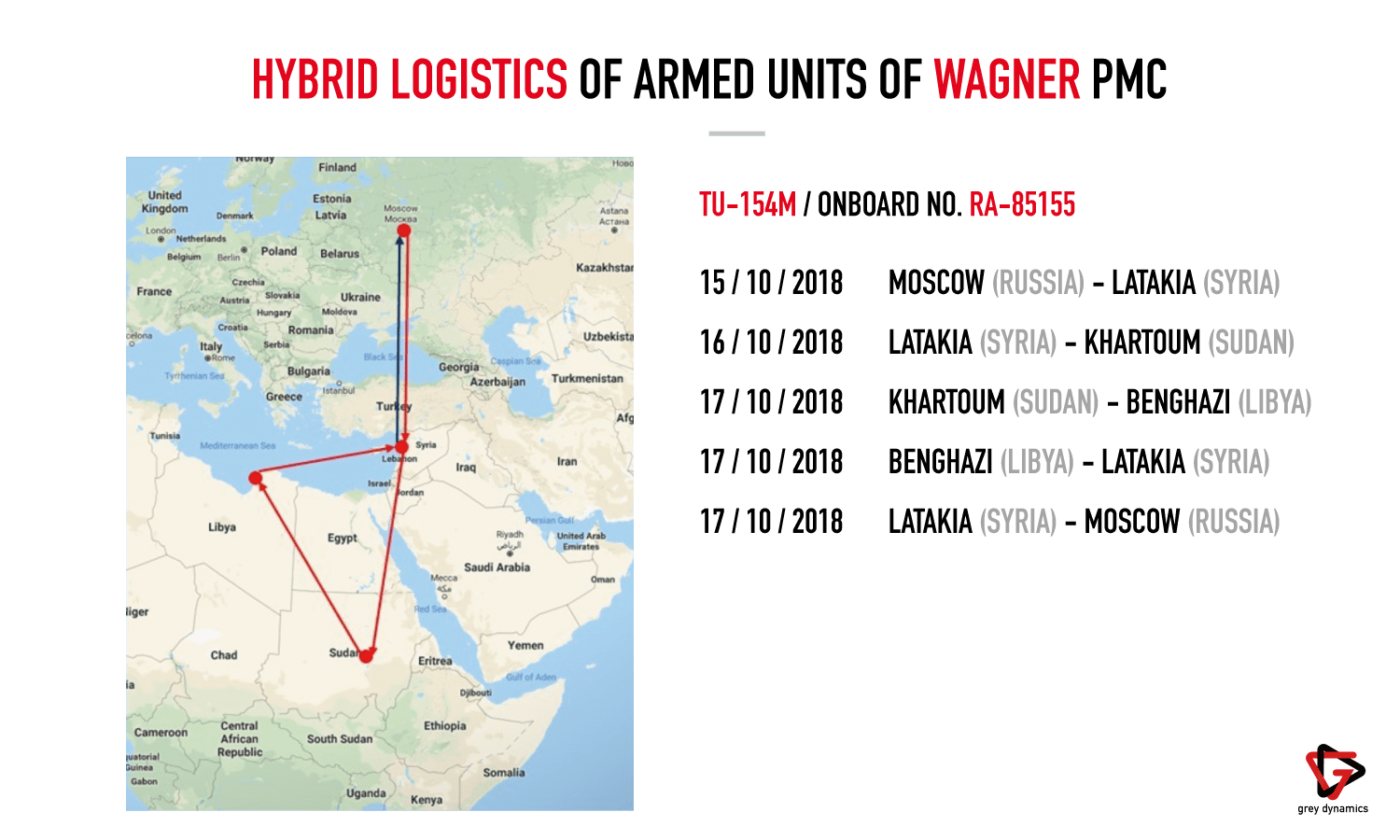 Some observers believe Russia’s interest in Libya lies in controlling the migration flow into Europe to pressure the West. This is unlikely. Based on Russia’s policy in Africa, Russia has identified Haftar as who they want to be in power. Then upgraded his army’s equipment, sent Wagner personnel for support, training and maintenance of equipment, and are likely to strike deals that give access to natural resources.

In these deals, Wagner personnel is likely to be scrambled to secure the centralized power and sites of investments either by force or in a consultancy role alongside local militia. Russia’s interest in Libya is oil and gas for economic gains and to reinforce its strategy of energy diplomacy, along with its desire to revive pre-civil war contracts in arms and infrastructure. Wagner will play a role in the physical security of these futures contracts, whether it be securing oil fields, pipelines, or the construction of railways, and it can only be expected that subsidiary companies of Prigozhin, similar to Evro Polis in Syria, show up in Libya alongside Wagner personnel.