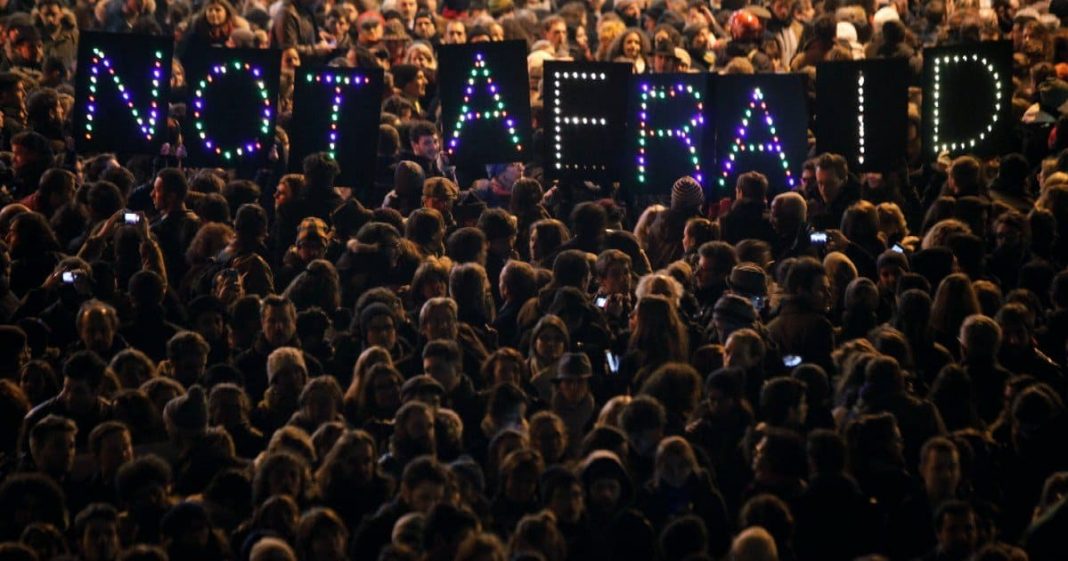 The Madrid and London attacks in 2004 and 2005 respectively presented a novel threat within the European community. Attacks between 2010-2020 switched and largely targeted countries like France, Germany and the United Kingdom. Right-wing attacks and arrests like the 2011 camp-shooting in Norway have grown. Still, Salafist jihadist-motivated attacks remain the largest threat to Central and Western Europe as seen in the 2015-2017 series of attacks from Paris through Barcelona to London. The trend of returning European fighters who joined terrorist groups has largely decreased since 2017, increasing the percentage of attackers who radicalised through online means. Terrorism outlook in Europe has almost certainly remained a threat and the nature of attacks between 2010-2020 has adapted in both tactics and targets.

KJ-1. It is almost certain that attacks have adapted their nature in the last 10 years decreasing in mortality but increasing in their aim on soft targets. The overall feeling of security is highly likely decreasing. This will likely undermine trust in law enforcement and responsible governmental bodies.

KJ-2. It is highly likely that radical jihadists will carry out an attack on European soil in the following 12 months. The polarised political environment and steady increase in individual radicalisation create an opportunity for IS to exploit with the use of online propaganda acting as an incentive.

KJ-3. It is likely that right-wing attacks and violence will increase in the following 12 months. An increasing wave of attacks and the inability of law enforcement to monitor all current threats will likely push right-wing terrorists to increase their social confrontation with ethnic and cultural minorities.

KJ-4. It is highly likely that attackers associated with IS and Al-Qaeda intend to normalise and increase the degree of acceptance of violence within European communities. A change in the type of target likely suggests a general intention to increase the degree of uncertainty associated with the occurrence of attacks. It is likely that these groups seek a violent response from polarised communities, indirectly raising the level of violence in a social environment without attacks having to occur.

The number of jihadist attacks; successful, failed and thwarted by law enforcement and intelligence decreased from 24 attacks to 21 attacks between 2018 and 2019. Out of the 7 attacks successfully carried out in 2018, 4 were claimed by IS. In 2019, only 1 out of 3 successful attacks were claimed by the terrorist organisation. The defeat of IS in the Middle East in March 2019 has highly likely impacted their ability to organise and carry out attacks but not completely erased and the terrorism outlook for Europe. Attacks like Vienna are an indication that despite a loss in capability the organisation is still capable to carry out an attack. Although it is likely that ownership of attacks will continue to decrease, there are no indicators to suggest that the trend in decreasing attacks will drop, particularly after the series of incidents between October and November in France and Austria.

The use of melee weapons, particularly bladed ones, will highly likely be the preferred method of attack by terrorists due to their availability and low law-enforcement attraction. Explosives commonly used involve Triacetone Triperoxide (TAPT), a substance similar to TNT. It being highly unstable is almost certainly a factor that contributes to the failure in successfully carrying out attacks using explosives. In 2018, all jihadi Salafists attacks using explosives were thwarted by law enforcement. 4 out of 7 attacks carried out in 2019 involved the use of a bladed weapon, and of the 7 jihadist attacks carried out in 2020, 6 used a bladed weapon, excluding the shooting in Vienna on the 2nd of November of 2020.

Although TAPT is a homemade explosive and can be obtained with easy-access chemicals like hydrogen peroxide and acetone, its instability and the attention it generates to law enforcement make it an unlikely choice of weapon. Still, its higher capability of damage means it is highly likely still sought by some terrorist cells. Weapons are easily purchased through the online black market, in particular from distributors in the Balkans due to the large pool of unregistered weapons abandoned after the conflict. The commonly used weapons observed between 2010-2020 are the m70 and VZ-58 assault rifles, variants of the AK-47. The Vienna shooter obtained an AK-47 through the online black market. This latest incident is an indicator of the capability of IS to structure attacks using complex material and weapons rather than knives and vehicles.

Targets of attacks are highly likely chosen to provoke a reaction, possibly violent, into disrupting the legitimacy and influence of the government in the eyes of the public. Randomness, as well as symbolism, is currently a crucial factor in targets. In Paris in November 2019, an IT specialist radicalised stabbed 4 colleagues to death in a police station, projecting an image of defencelessness. In London an ex-convict who was under surveillance targeted civilians in a fishmonger’s market and London Bridge, stabbing 4 people to death. In February, two men were stabbed in Streatham, London, and on April 2 were killed and 5 injured after a stabbing spree in Romans-Sur-isère south of Lyon. In June, a radicalised individual stabbed and killed 3 in a park in Reading.

In October and November, a school teacher was beheaded after showing a religious cartoon and in Nice 3 people were stabbed in a church. The intention of targets is highly likely to normalise the probability of an attack occurring anywhere, not only in symbolic landmarks. The characteristic of targets appears random, sporadic and not necessarily have to ensure lethality but instead spread insecurity and sow a lack of confidence in governmental capability.

With the rise of a right-wing ideology and a jihadist threat, it is likely that right-wing attacks begin to increase steadily. Between June and November 2019, 2 right-wing attacks were carried out in France targeting Mosques and Synagogues, while 2 in Germany targeted synagogues and the governmental head of Kassel, ending his life. After the beheading in Paris, 2 Muslim women were attacked under the Eiffel Tower by 2 females who showed right-wing radicalisation. Following the stabbing in nice, a man wielding a knife was shot outside a mosque in Avignon, wearing clothing similar to the Mouvement Identitaire, an extreme right-wing organisation in France. Although there isn’t causation, individual attacks on soft targets are likely going to become reciprocal, particularly if the political environment accompanies radicalisation. There is a likely risk of ethnicities being increasingly targeted in reactive attacks, broadening a cultural conflict which will likely see an increase in violent actions.

Availability and a lower probability of detection make it likely that bladed weapons will continue to be the preferred method of choice followed by the use of firearms in the terrorism outlook in Europe. 87.5% of attacks in 2018 and 57% of attacks in 2019 involved the sole or partial use of a bladed weapon. IED’s are continued to be employed but are less successful as they are easier to detect by law enforcement. In 2019, all 10 explosive-related attacks were prevented or failed to achieve casualties. Attackers show a tendency to carry out violent sprees, attempting to obtain the largest amount of deaths before being detained or killed. Other methodologies like using vehicles to ram the largest number of civilians are used, although these are increasingly rare as measures taken following a number of these attacks have deterred attempts.

Out of 7 Jihadist-related terrorist attacks in 2020 only 1 was acknowledged by AMAQ, the online news agency of IS. While the majority of attackers showed signs of radicalisation, none pledged allegiance to any group and simply echoed ideas and intentions similar to those echoed by IS members in the past. In November an IT specialist stabbed 4 colleagues to death in a Police station and despite the opportunity to project power and capability, AMAQ only mentioned and praised the attack but never claimed its authority. The overt defeat of IS in Syria and Iraq have highly likely created losses in different capabilities for the group and altered the terrorism outlook for Europe.

Although it is almost certain that the biggest capability lost was to structure and organise attacks, it is highly likely that the capability to maintain AMAQ’s propaganda machinery and the structure was severely damaged but not completely eradicated. The group is likely to turn to a low-profile approach in which mentions, recognition and praise of attacks become more common than claiming authority and attributing IS responsibility. This tactic will likely continue to push individual radicalised content and individual radicalised attacks.

In 2018, 74% of 198 studied radicalised individuals had been inducted by family members or relatives rather than foreign organisations. Although IS online propaganda has decreased, there has been a rise in individual contributions to radicalisation within online communities. There is a likely risk posed by content spread by individuals to incite more attacks, both in civil life and in European prisons. The number of inmates convicted of terrorist activities and radicalisation has increased, with 1,004 arrests in 2019. Issues within French prisons, in particular, are likely to pose a risk. 522 individuals had been detained and added to the radicalisation group, while in 2018 it was 510 and in 2017 it was 370. De-radicalisation measures have shown to fail, with inmates using smartphones to access online communities and an increase in terrorism outlook against prison officers in Europe.

Moreover, attackers like the London Bridge individual in 2019 was under surveillance and measures taken to de-radicalise him were insufficient. Attacks and incidents within prisons are likely to increase should the number of arrests continue to increase, which will almost certainly fuel radicalisation and the likelihood of attacks. In Spain, in 2018 a network of 25 jihadists was dismantled across 17 different prisons. As of July, although 522 inmates had been convicted of jihadist-terrorist offences in France, 900 people arrested for common offences show signs of radicalisation.

A further risk is the recent incapability of governments and security agencies to detect individuals as seen in the attacks during October 2020 in France. Abdoulakh A., the individual responsible for the beheading was not on a surveillance watchlist of French Intelligence Services. Neither was the attacker in the Charlie Hebdo attack. Should attackers continue to avoid supervision, the rate of sporadic attacks would highly likely increase the terrorism outlook in Europe and particularly in France.