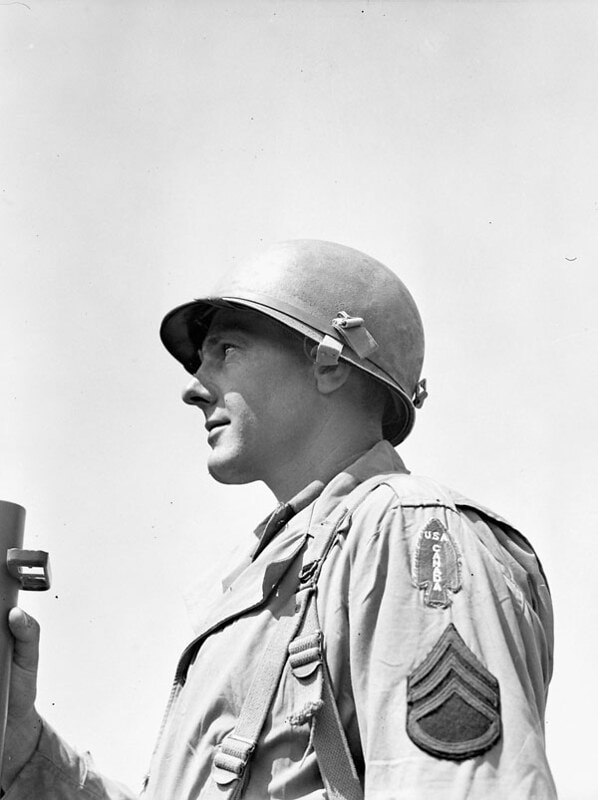 The First Special Service Force (SSF), also known as the “Devils Brigade”, is a bilateral U.S. and Canadian special unit that became a model emulated by the modern special operations community.

Likewise, the SFF shared striking similarities to the Jedburgh teams of the same era, and live along their legacy as contributors to the evolution of special operations following the Second World War.

The unit’s motto was the german phrase “Das dicke Ende kommt noch!”, which translates to “The worst is yet to come!”. This motto also served as a piece of psychological warfare. SSF soldiers carried cards with the unit insignia and the phrase and would leave them on dead German soldiers as a warning to their comrades.

For the insignia, a red arrow with text “USA” and “Canada in white signifying the unit’s bilateral composition.

1. History of the Devil’s Brigade

Special operations units and formal intelligence services found their footing during WWII. Moreover, the level of creativity exercised in their ideas and operations is groundbreaking. Furthermore, it set the evolutionary trajectory of specialized operations into the 21st century.

For the SSF, the initial creative spark came from British scientist Geoffrey Pyke, also known as “Churchill’s iceman”, a nickname coined after his discovery of “pykrete”, a material composed of ice and sand that could float in warm water while maintaining its structural integrity.

Pykrete never reached the industrial manufacturing line, nor was used to construct “seaborne airfields and ice ships” – an Churchillian idea following the venerable leader’s initial witness of the material, as it floated in his bathwater during a demonstration by Louis “Dickie” Mountbatten, Chief of Combined Operations Headquarters. (source)

Nevertheless, the genius of the scientist behind it captivated Churchill, thus a working relationship began.

Pyke’s genius manifested in bold ideas for battlefield innovation. In response, Churchill and Mountbatten tapped into it as a source for imaginative research and development planning, which was needed to address some of the complex issues presented by the Axis in the European theater, such how to attack and cutoff German energy sources in Romania and Norway. (source)

Project PLOUGH addressed the problem Allied forces would face, specifically the difficulty of conducting special operations on hard targets in areas rife with snow. The solution, largely spearheaded by Pyke, was to construct a specialized vehicle that could be air delivered and capable of taking out heavy targets: the M29 Weasel

Furthermore, Pyke synthesized the idea of upraising a specialized crew of commandos capable of conducting unconventional operations in any clime and place, terrain or weather condition. Pyke drafted a roughly fifty page memorandum detailing the project’s requirements and mission, which was centralized to winter operations in Romania and Norway. That memorandum was forwarded to Churchill, who in effect bought in. (source)

Early Formation of The Devil’s Brigade

Churchill determined the best route would be to outsource the project to the Americans and Canadians, thereby creating a “North American Force”. He then routed project PLOUGH to the War Department in Washington D.C. (source)

In 1942, Lieutenant Colonel Robert T. Frederick worked as a staff officer in the U.S. War Department, his boss being no other than future U.S. President, Maj. Gen Dwight D. Eisenhower. Fredrick’s role was to filter and judge proposed ideas for operational tasks that came through various channels. Pyke’s memorandum reached his orbit and met initial distaste. In the eyes of Frederick, the project was unfeasible.

General Eisenhower thought differently. Project PLOUGH was idyllic for Allie partnership with the UK, and worth pursuing. Fredrick, an unlikely candidate to raise and command the project’s unit, was directly tasked with spearheading the entire program.

Frederick’s unlikeness stemmed from a rather unremarkable career. His military experience did not include combat experience, and he was young for his rank – 35 years old, to be exact. Nevertheless, in true underdog fashion, Frederick rose to the occasion, and led The Devil’s Brigade through the war and into WWII canon. (source)

The unit’s recruitment effort was almost as unconventional as its mission. Because of the unique demands of being a commando, the Army targeted enlisted men with relevant skills derived from life experience and pre-military careers (source):

As deduced from this list, the targeted men had experience in physically and mentally demanding careers. Furthermore, the skill-sets instilled by each of those careers transfers directly into the needs of the aspiring commando unit.

In the Summer of 1942, the recruitment phase ended. Around 1800 soldiers from the U.S. and Canada embarked on a journey to Camp William Henry Harrison in Helena, Montana, to begin the training cycle.

Lieutenant Colonel Frederick awaited the recruits and quickly began the rigorous training cycle to prepare for deployment. Similar to modern special forces training, the tempo was fast-paced and taxing on the mind and body. Also, the men gained proficiency in a variety of needed skills:

Furthermore, training in Montana helped simulate the conditions the men would face in Norway. The commandos conducted airborne training during the winter, which included having to withstand intense cold while awaiting a live jump. (source)

Beyond Montana, the unit trained in Chesapeake Bay and Norfolk, Virginia, as well as Fort Ethan Allen, Vermont.

It was also during training that the unit received its official name. By the direction of Frederick, the men became the First Special Service Force. The simplicity of this name helped mask its unconventional nature. The moniker of “The Devil’s Brigade” would come later in the units timeline.

Frederick organised the First Special Service Force in an unconventional manner. Below the top, there was an HQ Detachment, three Combat Regiments, and a separate Service Battalion.

As the main effort, the Combat Regiments contained roughly 800 men each.

The Service Battalion mission included maintenance, service, and ensuring all the minute details were covered so the men in the main combat regiments could focus solely on training. Because of this setup, the commandos did not have to take part in normal military drudgery, such as working details and watch. Nevertheless, personnel within the service battalion still received infantry training, albeit not to the same level of advancement as the main fighters. Service Battalion roles included (source):

Within Headquarters, the most notable asset was the Air Detachment. In essence, the Air Detachment served the commandos by providing aircraft and further support for airborne operations. Furthermore, the Cannon Company came from the 1st Ranger Battalion, and provided indirect fire support for the regiment commandos.

Contrary to modern special operations forces, the equipment during the time of the Devil’s Brigade lacked diversity. Nevertheless, the men in the unit used both standard and lesser used pieces of gear and weaponry throughout the course of its existence:

The original mission plan for the Devil’s Brigade included the invasion of German positions in Norway, specifically their hydroelectric power plants and other strategic locations. Unfortunately for the unit, higher command scrubbed that mission during their training cycle.

Although the men never reached Norway, the military still used them as a highly trained war-fighting asset.

In July 1943, the First Special Service Force embarked to the city of San Francisco, California. It was there that they staged for the unit’s first official deployment to combat, which was strangely a domestic mission: invading the Aleutian Islands.

Nestled between Russia and Alaska in the Bering Sea, the Aleutian Islands are an archipelago that had a lesser known significance in the Second World War. As far as the war reaching the U.S. homeland, Pearl Harbor is what first comes to mind for most people, as the only incident. However, the Aleutian Islands were once a point of conflict between the Japanese and U.S.

The First Special Service Force mission in Aleutian was to invade the island of Kiska. Upon arrival in August, the unit found the island empty. To their misfortune, the Japanese fled prior to their arrival, thereby nullifying the prospect of combat experience. (source)

4.2 The Devil’s Brigade in Europe

Europe was the theater of war that gave the Devil’s Brigade their name and prestigious reputation. Moreover, the unit’s first combat experience was in Italy.

In December 1943, the Brigade used their proficiency in winter operations to help the Allies secure enemy positions in the Italian mountains that were thought to be impenetrable. Furthermore, the unit fought in the mountain settings of Monte la Difensa, Monte la Remetanea, and Monte Vischiataro. (source)

In February 1944, the men left the mountains and deployed to Anzio in support of Operation Shingle. For this operation, the unit mission included holding a flank along the previously established beachhead. Unsurprisingly, the SFF proved to be an effective aggressor to the German enemies. Because of the fierce and aggressive nature of the SFF resistance, Anzio became the location where the nicknames “The Devil’s Brigade” and “The Black Devil’s” were bestowed upon the men. Both monikers came from the found a diary of a deceased German soldier, describing the unit’s overwhelming battlefield presence, and the black camouflage they wore during night operations. (source)

4.3 The End of the War, and Disbandment of the Devil’s Brigade

By the end of the war, the Devil’s Brigade racked up an incredible list of accomplishments. They killed over 10,000 enemy soldiers, captured around 7,000, and they had only 30 of their own become prisoners of war throughout the duration of their time in the combat theater.

In December 1944, in the city of Villeneuve, France, the unit breathed its final breath. Moreover, a few different angles played into the point of disbandment. First, Frederick received orders to take the role of commanding general for the 45th Infantry Division. Second, following the loss of Frederick, the SSF ran into recruiting issues. In essence, the caliber of men that had served within its ranks was nowhere to be found. In the end, the men of the Devil’s Brigade split to other units, thereby ending the SSF’s period of active service. (source)

4.4 The Legacy of the Devil’s Brigade

This survey of the Devil’s Brigade doesn’t come close to documenting the volumes of accomplishments and experiences the unit had throughout its history. Nevertheless, it is impossible to neglect the nature of how influential they are to modern day special operations.

Although the SSF never got to complete the mission that led to their creation, they showcased the strength and capability of a well trained, well disciplined, creative, unconventional fighting force.

Michael Ellmer
Michael is a Senior Intelligence Analyst at Grey Dynamics. He spent eight years as an infantryman in the Marine Corps, with tours to Iraq, Afghanistan, and the Pacific Theater. Upon leaving the service, he completed his undergraduate degree at Seattle Pacific University with a focus on communications studies. He is currently pursuing a master’s degree in Strategic Intelligence Analysis at Brunel University London.