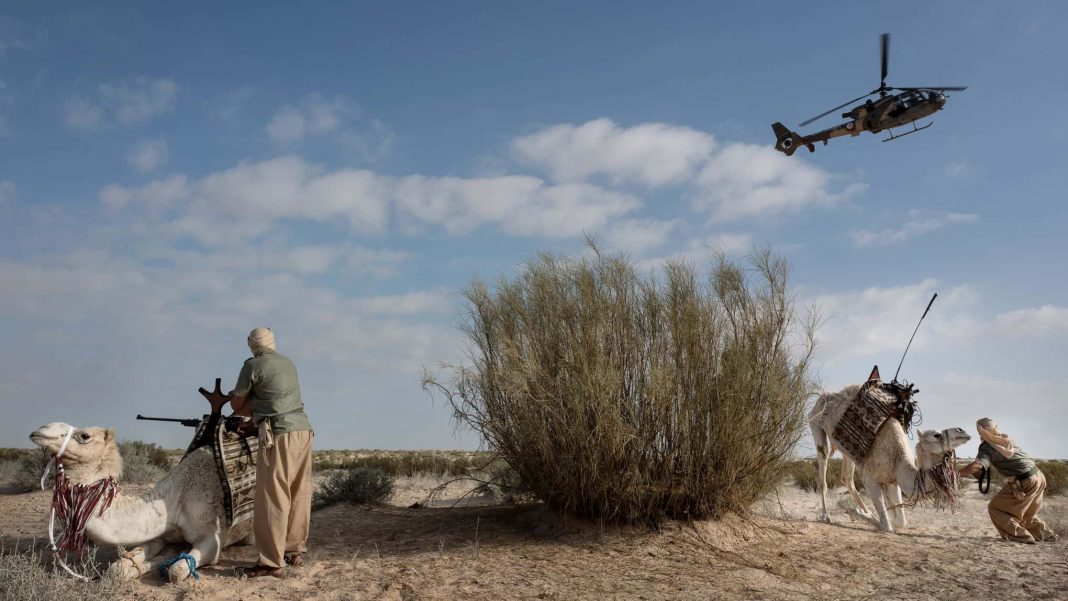 Deep in the South of Tunisia, the Mahari Desert Patrol or “Groupement Territiral Saharien” (GTS), a part of the Tunisian Army, protects the border areas and remote deserts of Tunisia from all who may do Tunisia harm. This includes terrorists, smugglers, those crossing borders illegally, and more. The areas of Tunisia covered by the GTS stretch around hundreds of kilometres of borders with Algeria and Libya.

They also guard thousands of square kilometres in the deep and scarcely populated interior, from their bases in Douz and Remada. An important part of the GTS, albeit a small one these days, is the Mahari Desert Patrol, which is unique, as it is one of a handful of military units that are still mounted on camels for operational purposes.

These soldiers and officers, mounted on camels and wearing traditional yet practical clothing, patrol those areas in the Tunisian wilderness where even 4×4 vehicles cannot comfortably navigate. Even though the Mahari Patrol could easily come out of an Orientalist caricature, their purpose is an entirely practical one, and for them, the camel is a pragmatic tool to give mobility, survival and transport capability in areas for which no alternative exists. Similarly to the GTS, their mission is to patrol the vast desert, protecting the security and integrity of the Tunisian state and borders.

The Mahari soldiers take the “fighting light” concept to the extreme and can deploy into the desert for days, or even weeks, with little-to-no logistical support to keep them fed and watered. They are mostly equipped with Kalashnikov variants, Steyr SSG 69s, and an assortment of light machineguns, including the M60. They also deploy with long-range radios, GPS, and the other basic equipment needed to sustain life for long periods in a harsh climate.

Because of the complex mission, the Mahari soldiers are trained in topography, survival skills, riding skills, tracking skills, operating without GPS and radios, and boast of being able to operate day or night, in any conditions the desert throws at them. Working in conjunction with more conventional forces, the Mahari soldiers also have an important reconnaissance capability. Another important factor is that more than half of the soldiers and officers are recruited from the areas in which they operate, and have positive relationships with the inhabitants.

Proximity to the community and local knowledge of human geography and environment are key tactical advantages that can not be overlooked. Above all else, the Mahari Patrol pride themselves on flexibility and being able to adapt to situations that would defeat most other soldiers.

The Tunisian Sahara is one of the harshest environments in which to survive, for multiple reasons. The temperature can vary wildly, from 45°C in the summers, to 2-3°C at night, in the Winter; yet, the Mahari Patrol take pride in being able to operate in all climes. Additionally, desert winds and sandstorms can make communication, visibility and living conditions extremely poor. Add to this the wildlife (venomous snakes and scorpions), and you have a severe environment in which the Mahari Patrol not only survive but excel.

Preserving a Unique, Yet Pragmatic Legacy

The Mahari Patrol is among the only mounted operational units in the world. Their existence and unique nature preserve Tunisian traditions that would otherwise be lost. Even the way that they cook bread, by burying it in heated sand, makes them part of a valuable, living, cultural heritage.

This should be of great interest not just to Tunisians, but to anyone with any anthropological interest in unique customs and skills that persist through this unit’s existence. However, due to the utter scarcity of English language information on the unit the Mahari Desert Patrol is almost entirely an unknown entity within the English-speaking internet, despite its fascinating history, culture and circumstances.