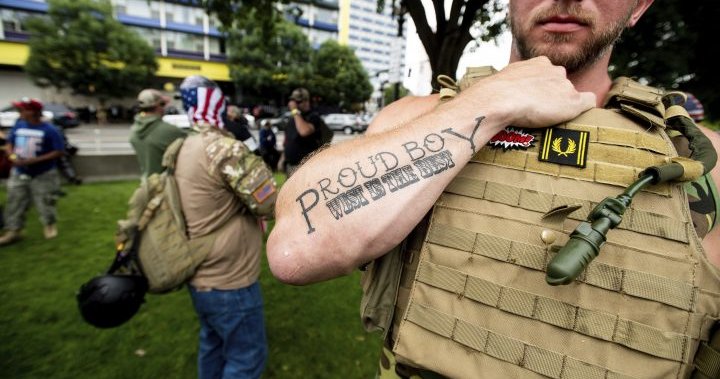 KJ-1. It is highly likely that the Proud Boys will become energized and experience increased membership because of the recent negative media attention the group received from partisan news outlets and journalists.

KJ-2. It is highly likely the Proud Boys will continue to be a counter element at political protests. Although the group does organize their own rallies, most of their activism is as an answer to adversarial groups like Antifa. It is almost certain that civil unrest in the US will continue to rise in the upcoming months leading to and following the election. This will give a heightened reason for groups to enter physical conflict.

KJ-3. Despite media reporting, it is highly likely that the Proud Boys will not be designated as a gang or extremist group anytime soon. The FBI has already clarified that although they may have tied to extreme acts, the group itself will not be labelled as a gang or extremist group. This will likely change if Joe Biden is to be elected in the upcoming election. President Trump recently declared Antifa a terrorist organization, and it is likely the Proud Boys will receive that same treatment as a political move.

If you have followed what has been going on in American politics or culture over the past few years, there is a chance you may have found yourself wondering if “abandon hope all ye who enter” from Dante’s Inferno can be placed in the arrivals entrance of every international airport terminal, just as it is over his fictionized gates of hell. Nonetheless, tribalism has set in, and a diverse selection of factions have found themselves locked in battle in domestic political and social protests.

Since the 2016 national election, protests and direct activism in the United States have generally been steered by an energized public sphere. Various political and social groups have been formed, strengthened, and locked in a kinetic battle over the superiority of their ideas.

The fringe groups on the traditional “x-axis” model of the political spectrum have managed to gather significant media attention. The unfortunate reality of that is the hyper-partisan nature of journalistic coverage. It happens on both sides, with groups like “Antifa movement” on the left being used as political pawns for the right, and the “Boogaloo movement” on the right being used as political pawns for the left. This hyper-partisanship makes it difficult to separate truth from falsehoods and analyse these groups objectively.

In the Swahili language, Uhuru is a word for freedom, liberation, and autonomy. In the West, the term has ironically been appropriated as the “battle-cry” for the Proud Boys, one of the strangest contemporary political groups to emerge in the US. Chances are, if you encounter the Proud Boys in the wild, you will hear Uhuru chanted in unison among its members.

On the 25th of September 2020, Oregon Governor Kate Brown declared a state of emergency. Prior to that announcement, Oregon had endured months of hardship. Recent wildfires had wreaked havoc across the state, evacuating families and destroying homes. In the city of Portland, protests for law enforcement reforms have resulted in almost nightly riots, violence, and destruction, caused by primarily left-wing groups like Antifa and their allies.

On this day, however, the reason for the declared emergency was different. The Proud Boys were set to march in Portland the following day, and it was expected that their presence alone would spark civil unrest and that their reasoning for coming was to seek some sort of vigilante justice against the adversarial groups causing destruction in the city.

The rally was rather uneventful. At least in the sense that it remained relatively peaceful. In national media, however, the Proud Boys once again became the target of conversation and media talking points.

72 hours later, on the evening of the 29th of September 2020, the US public was graciously treated to the first presidential debate, between candidates Joe Biden and President Donald Trump. During the debate, moderator Chris Wallace asked the President: “Are you willing tonight, to condemn white supremacist and militia groups, and, to say, that they need to stand down, and not add to the violence at a number of these cities”. The President hesitated to directly condemn any groups and asked for clarification on which groups Wallace meant. Biden suggested the Proud Boys, to which the President replied, “Proud Boys, stand back and stand by”.

The Fallout: Although the President publicly denounced the group a few days later, let us just say, the partisan media were given a gift.

“Proud of Your Boy”

Gavin McInnes first heard the song “Proud of your boy” at his daughter’s school production of Aladdin. The song itself was cut from Disney’s 1992 animated classic, and according to McInnes is “the most annoying song in the world”. That conclusion was not based on its musical composition, but instead the lyrics. According to McInnes, “if there’s one song that would make a father totally devoid of pride, it would be this ‘Proud of Your Boy’”. The core message of the song involves Aladdin apologizing to his mother for what McInnes would consider a boy acting “like boys do”.

McInnes is no stranger to controversy. In 1994 he co-founded Vice Media and left it in 2008 due to “creative differences”. Since then he has been involved with multiple different right-wing and alternative news sites, ranging from being a commentator on Fox News to having his own internet show on various independent networks.

Many media outlets and journalists consider him to be some sort of “racist hipster”, likely due to his profane and unfiltered nature and punk rock attitude towards politics and culture. McInnes has written guest columns in white nationalist affiliated websites such as VDARE, American Renaissance, and Takis Magazine.

Furthermore, McInnes has openly given a platform and even praise towards prominent white supremacists like Jared Taylor, Augustus Invictus, and Richard Spencer. Despite being documented using racist and sexist language, McInnes vocally claims that he or his Proud Boys creation are not white nationalists or racist in any way. Media outlets think differently, and they commonly label both parties as allies of the white nationalist movement.

Ideology, Unit Composition, Tactics, Techniques, Procedures, and All the Other Good Stuff.

The official website claims the Proud Boys are a “pro-Western fraternal organization for men who refuse to apologize for creating the modern world; aka Western Chauvinists.” Although only men can be part of the organization, women have their own supportive sub-group called “Proud Boy’s Girls” that is officially recognized.

1st Degree: A prospective member openly declares: “I am a western chauvinist, and I refuse to apologize for creating the modern world”.

4th Degree: The 4th degree is more of an “addition” to the primary first three. This degree is awarded to a Proud Boy who has “endured a major conflict related to the cause”. McInnes himself wrote an article on the official group website clarifying what that means after controversy over its adversarial and violence promoting tone.

The Proud Boys are not going anywhere, and their recent media coverage has only energized them more. The central threat they present is a political and social protest, and at grassroots rallies, they organize in support of their causes. The primary threat is of violence, although they are not known to attack or harass ordinary civilians. The direction that the group takes in the coming months is unknown, but the conditions are set for ample opportunities to demonstrate their growing activism and membership. Media coverage is likely to inspire more people to join in protest of the media and groups like Antifa who are in direct opposition to the groups’ ideology.