The Return of Ecuador to the United States’ Backyard 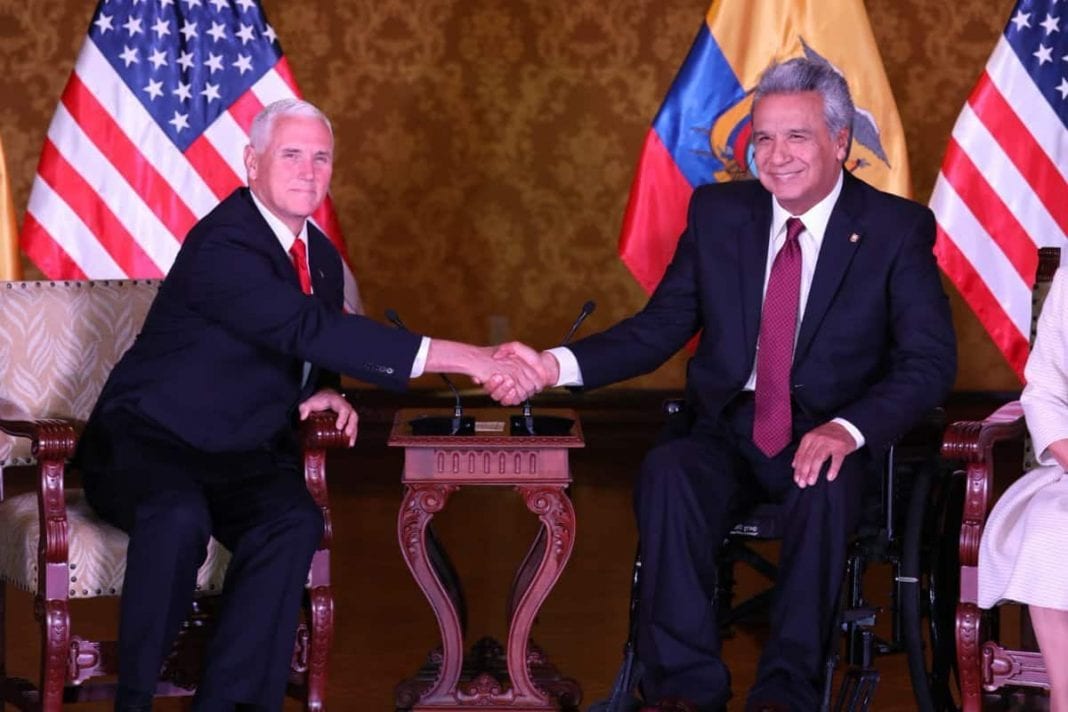 In 2017, when President of Ecuador Lenin Moreno took office, much fear was spread by the media and the opposition. Many thought he would continue the legacy of his predecessor and mentor Rafael Correa. Correa was a key regional player and shrewd politician during the rise of the left-leaning governments in South America. After governing Ecuador for 10 years, he continues to be a polarizing figure in Ecuador, but currently resides in Belgium eluding charges that he ordered the kidnapping of a political opponent. Charges he claims are politically motivated.

After the 2017 election, Moreno and Correa became enemies and Moreno purged the government of those formerly close to Correa. Correa was also a harsh critic of the U.S. and its historical dominance over Ecuador and Latin America. After a WikiLeaks release of confidential diplomatic cables in 2011, Correa threw out U.S. Ambassador Heather Hodges for indicating that Correa was complacent to corruption within the police forces.

Correa also refused to extend the lease of the U.S. military base in Manta and the U.S. Agency for International Development (USAID) left the country.  Bloomberg reported that just days after the 2017 election, the former U.S Ambassador to Ecuador Todd C. Chapman was called to Moreno’s office where he spoke of his desire to rebuild the relationship between the two countries. Two recent high-profile stories have garnered international attention and showed Moreno’s willingness to play ball with the U.S.

The case of Julian Assange

In April this year, the U.S. Department of Justice released 17 new superseding indictments accusing Assange of violating the Espionage Act. If convicted, Assange faces a prison sentence of over 170 years. Assange’s official extradition hearings are now scheduled to begin in Feb 2020.

A key connection or collateral damage?

On the same day, Assange was dragged out of the Ecuadorian embassy in London, Ola Bini, a Swedish programmer data privacy advocate, was arrested in Ecuador’s capital Quito. Bini had been working in the Quito office of the company Thoughtworks since 2013. Bini was arrested at the airport supposedly on a scheduled trip to Japan for a martial arts competition. He was held for almost 3 months in a Quito jail under suspicion of hacking, but with no formal charges held against him. On 20 June,  an Ecuadorean judge unexpectedly ordered his release, but Bini remains under investigation for allegedly and is barred from leaving the country.

According to AP News, top Ecuadorian officials allege Bini was part of a plot with two unidentified Russian hackers to release compromising documents about President Moreno. On June 27, U.S. investigators are expected to interview Bini as a potential witness or person of interest in the investigations into Assange and WikiLeaks. There are conflicting reports that Bini travelled between 12 and 15 times to London to visit Assange at the Ecuador embassy. In April, David Kaye, the United Nations’ special investigator on freedom of expression, criticized Bini’s detention and said, “nothing in this story connects Ola Bini with any crime.”

However, it did not stop there. Drug trafficking is a growing problem in Ecuador. This month, Ecuador’s Defense Ministry announced that the U.S. military would use the island of San Cristobal of the famed Galapagos islands as a refuelling station for aircraft involved in anti-narcotics operations. The islands have been given the special “patrimony of humanity” designation by theUnited Nations cultural agency, UNESCO.  The sparked an outcry from conservationists and fear that it would lead to a permanent U.S. military base on the islands.

Prior to the arrest of Assange, Michael Fitzpatrick, President Trump’s nominee for Ambassador to Ecuador said at his confirmation that “Mr Assange does damage to our national security, and the United States will have to assess the bilateral relationship accordingly.” For the U.S., the expulsion of Assange, the arrest of Bini, and the return to cooperation on the “war on drugs” must have come as welcoming signs that Ecuador is back under its wings.