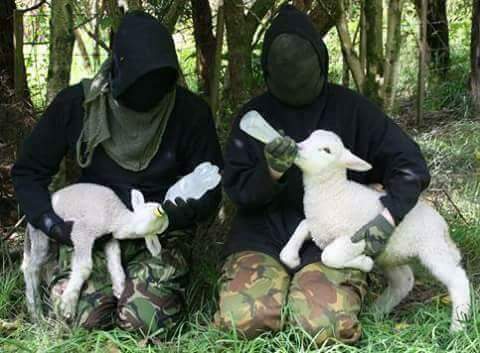 Vegan extremism is a real threat. No, that is not a joke. A bit comical perhaps, as it would be to say the threat of “ketogenic extremism”, “paleo extremism”, or even “whole-30 extremism”, but shades of truth remain. When “extremism” is used as a descriptor, it is commonly associated with ideologically driven groups like al-Qaeda, Antifa, and the myriad of white supremacist factions currently active in the Western world. Certainly not the vegan archetype that shares characteristics with the 1960s countercultural and modern-day environmental movements.

Unlike vegetarians, vegans commonly view their dietary choices as part of a lifestyle, one that can branch out into the realm of ethics and sustainability. Adopting it as a lifestyle can lead to the development of a  “vegan ideology”, and it is safe to say that when ideologies reach their extremes, something as innocent as abstaining from consuming animal products can end up with the practice of eco-terrorism.

Eco-terrorism is no new concept. According to the United States Federal Bureau of Investigations (FBI), eco-terrorism is “the use or threatened use of violence of a criminal nature against innocent victims or property by an environmentally-oriented, subnational group for environmental-political reasons, or aimed at an audience beyond the target, often of a symbolic nature”. In the case of vegan extremism, the definition of eco-terrorism can be used as a label for the activity of some proponents.

For example, two French activists were sentenced to prison in 2019 for carrying out attacks in the city of Lille on commercial infrastructure that supported what they perceived as harm towards animals, such as restaurants and butcher shops. The specific instances took place between November and February of 2019 and consisted of destruction and defacing of property by smashing windows, graffiti tagging, and even as far as using Molotov cocktails to commit arson.

The two activists were associated with the “anti-speciesism movement” – an extreme vegan ideology that promotes the idea of all species being equal instead of on a hierarchy. By the ideology’s logic, if all species are equal, then a chicken farmer or local butcher is equal to a slave driver or a murderer. If vegan extremists assign such meanings to farmers and butchers, then it makes sense why they would try and stop their operations by any means necessary.

Not a New Threat

The threat of vegan extremism is not as easily discernable as other radical ideologies. To even use apply the term eco-terrorism to vegan extremist incidents should be done with great caution as an effort to avoid a hyperbolic or over-exaggerated label on an act or group undeserving of it. But then the question begs, as to what truly constitutes a threat in the world of vegan extremism? At what point do rather small-scale incidents like the ones in Lille morph into organized and dangerous actions carried out at an organizational level?

Such groups do exist – primarily in the contemporary western world. The US is historically home to the Animal Liberation Front (ALF), an extreme direct-action group responsible for around 90 incidents in the United States between 1970-2018. Although ALF has been rather dormant in recent years, they historically carried out attacks on places like laboratories that conduct product animal-testing, dairy and meat processing plants. There are no recorded deaths attributed to ALF, and the bulk of their attacks fell under the scope of “property destruction”.

Unlike ALF, active contemporary vegan extremist groups that are a public threat tend to masquerade under the guise of modern activist culture. That includes well crafted media, professional web design, and trying to use biased interpretations of legal code in order to carry out ethically questionable campaigns against ideological opponents. Take the organization Direct Action Everywhere (DxE), for example.

DxE can be used as a case study for the potential threat vegan extremism can have on parts of the public sphere, as well as the difficulty and “grey area” that comes into play with the extremist label. As per the official DxE website, “Direct Action Everywhere (DxE) is a global grassroots network of animal rights activists. Together, we will achieve revolutionary social and political change for animals in one generation.”  Following that statement, the group lists their claimed core values, the first one being “We are fiercely nonviolent”. Depending on one’s definition of what violence actually means (strictly physical versus at times non-physical), that is somewhat inaccurate when juxtaposed with some of the group’s activities.

DxE is based in the social activism haven known as Berkley, a moderately sized college town in the state of California. Back in the Summer of 2017, DxE set their sights on a The Local Butcher Shop, whose name also describes its function. According to the local news source Berkleyside, who reported on this incident, the family owned butcher shop was a regular victim of DxE protests in front of their store. The owners were eventually extorted by the group into either placing a sign on their storefront that said “Attention: Animals’ lives are their right. Killing them is violent and unjust, no matter how it’s done”, or they will continue to disrupt their business (which simultaneously disrupted other businesses in the immediate area).

This is just one of many incidents DxE has been responsible for. Since its formation in 2013, DxE has be involved in numerous direct-action incidents in support of their cause, resulting in multiple felony charges and arrests of members. The United Kingdom is home to a similar group called Animal Rebellion who promotes “civil disobedience and rebellion” as part of its overall strategy.

Contemporary vegan extremism is a threat, although in an incredibly unique way. As noted in the two shared stories, the ways that vegan extremists operate is generally through destruction of property or intimidation tactics.

In reality, the vegan community of the western world is a small demographic as it is, with the extremists being an even smaller one within it. The lack of overall strength in numbers or cohesive organization does question how effective the more “radical” factions within veganism could be. Nonetheless, vegan extremists are a threat to the farming and agriculture industry, specifically the animal products side, and likewise the employees who have to live in fear of being a victim of direct-action campaigns.

Many of the actions vegan extremists take are claimed to be non-violent or for the good of their cause, but there remains a realistic probability of eventual harm towards humans if one of their direct-action operations is not carried out safely. Farmers, restaurants, butchers, and other handlers of animal products are often mentally affected by the threat of vegan extremists, including fear of personal harm and violation of security. Property destruction and theft of animals (another tactic) also affects the income and livelihood of the families who rely on animal products as their source of income.

The biggest threat, however, is the threat of an idea. With any radical or extreme ideology, there comes an accompanied space for individuals to organize and carry out harmful and destructive actions. When extremism reaches its logical conclusion, something even as innocent sounding as veganism has the potential to turn into something far more sinister.