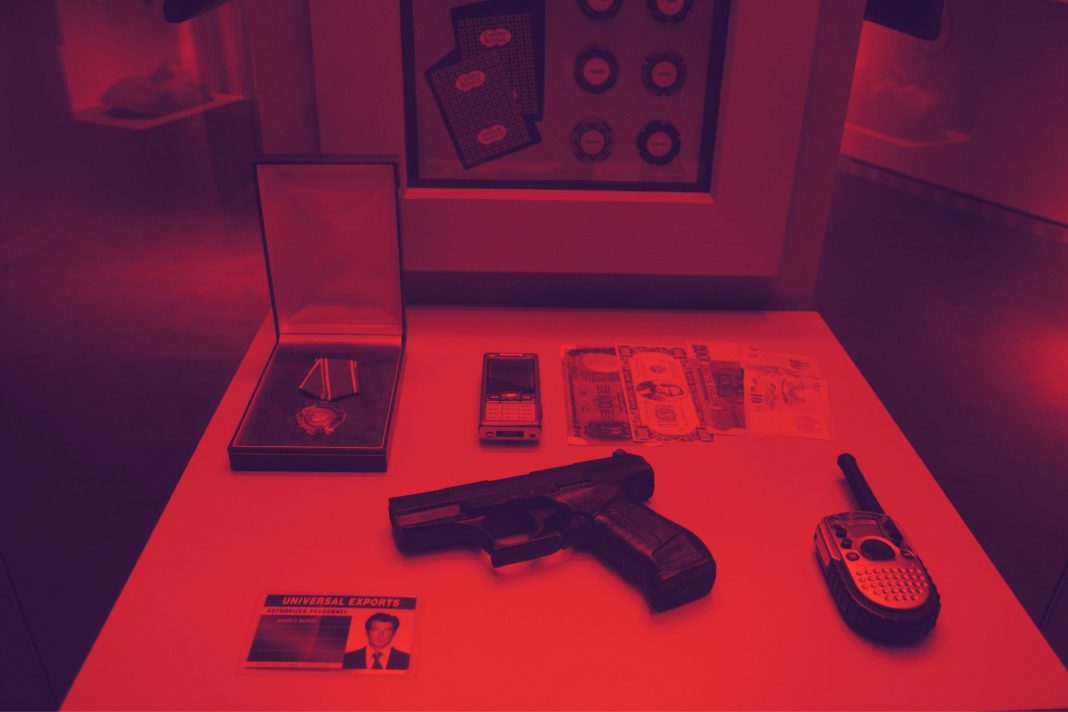 James Bond is the world’s most famous secret agent. Code named “007” which is ironically also the average number of times he reveals his secret identity per movie. In the real-world Bond would be one of the worst secret agents of all time. The job of a clandestine intelligence officer is to collect intelligence without the enemy knowing. However, Bond can’t help but blow his cover at every turn.

In most instances, clandestine intelligence officers will never even carry a firearm in the course of duty. If an undercover intelligence officer is found with a firearm it can blow their cover and get them landed in jail or worse. In every film, Bond engages the enemy in dramatic gunfights that end in gigantic explosions.

Typically, Bond is armed with his trusty pistol which is almost always the Walther PPK. Most often Bond is seen resourcing weapons from dispatched henchmen. However, the purpose of this report is to examine what James Bond chooses to arm himself with and why. All the weapons that bond captures from enemies and fictional gadgets are excluded. This report will examine exclusively the weapons Bond is issued throughout course of the 25 films.

A lot can be said about James Bond’s choice in pistols but at the very least he’s always packing heat. The world-renowned spy is never without his trusty sidearm. Most often this takes the form of the Walther PPK. Ironically the world-famous British spy is known for a German made gun. The PPK made its iconic screen debut as Bond’s handgun of choice in From Russia with Love and has since become a mainstay. However, the Walther PPK is a bad choice because its outdated, its heavy, and it fires a weak cartridge.

Admittedly, it’s not suprising that a 91-year-old handgun would be a poor choice by modern standards. However, what is surprising is that Bond continues to carry it in 2021. It is indicative of the larger point. James Bond prefers form over function. In the 1990s and early 2000s Bond could be seen with the Walther P99.

The Walther P99 is a quality handgun which has seen use all over the world by various Police and military units. It is a much more sensible gun to carry if Bond is expecting to shoot it out with henchmen. But what the P99 lacks is a sense of soul. The P99’s polymer frame and blocky edges don’t conjure up the image of a globetrotting secret agent. Only the sleek contours of a pistol from a bygone era have that ability.

In 1983’s Octopussy, Roger Moore’s portrayal of Bond forgoes the familiar PPK. It was swapped out for a Walther P5. The P5 was designed in the 1970s as a replacement for the PPK. Ironically, the P99 was the replacement for the P5. In many ways the P5 is the middle child between the PPK and P99 both chronologically and in terms of features. The P5 has elements of both designs within it.

The Walther P5 makes significantly more sense for Bond to carry as a side arm compared to the PPK. The P5 is an all around more practical design. Plus, it has some of that iconic old-world charm that makes the PPK so unique. However, Bond would carry the P5 for only one movie.

In Roger Moore’s debut as Bond, he can be seen briefly wielding a Smith and Wesson Model 29. Live and Let Die was the first bond movie of the 1970s. It was coming off the tail of Dirty Harry which had released two years prior. It was almost certainly no coincidence that both Bond and Harry Callahan wielded a S&W Model 29. A hulking beast of a pistol fit for the 1970s.

There are a few instances in the films where Bond makes practical weapon selections. However, it is almost exclusively when it comes to two-handed weapons. Throughout the films Bond employs four weapons that both look good and make sense.

These rifles and submachine gun all make a good deal of sense. They have specific purposes, and they fill those roles well. Aside from the WA 2000, all three of these weapons are still in service today. They are extremely functional, and it helps that they all look pretty cool.

The Good, the Bond, and the Bizarre

Throughout the films Bond can be seen utilizing a variety of strange firearms. Some are wildly impractical, others have odd appearances, and some just make you scratch your head.

In From Russia with Love, Bond is seen employing an Armalite AR 7 as a sniper rifle. This is impractical for a variety of reasons. The AR 7 was designed by the same company that designed the M16 for the US military. “AR” is often misattributed as “assault rifle”. However, it stands for “Armalite Rifle” as evidence in the AR 7. The rifle isn’t being used for its intended purpose and the cartridge it fires is not effective at killing anything bigger than a squirrel. An odd choice for Bond to use.

In License to Kill, Timothy Dalton’s Bond is carrying a Taurus PT92, which is a Brazilian made clone of the Beretta 92. While the Beretta 92 has seen service by military and police across the globe, the PT92 has not. Taurus is infamous for its poor craftsmanship and quality control. Am I overanalysing Bond’s choice of firearms? Perhaps. It’s likely the filmmakers chose to use the PT92 because it was what they had available.

The 1990s ushered in a new era of James Bond. The mantle was picked up by Pierce Brosnan. In his second Bond film, Brosnan wields a rather odd-looking rifle. It is a heavily modified AR 18 designed to fold. The AR 18 is designed once again by Armalite and is a successor to the M16. The weapon’s internal operating system was heavily influential within the firearms industry. For example, the popular SCAR 16 (light) and SCAR 17 (heavy) rifles use the same basic operating system. The compact design of Bond’s folding AR 18 is interesting. However, it does beg the question. Why?

Submachine guns like the UMP-9 were already in existence at the time. Additionally, with the stock folded a UMP-9 would likely have a comparable footprint, providing equal concealability. Lastly, the incredibly short barrel on Bond’s AR 18 firing 5.56x45mm would likely have worse terminal ballistics than an UMP-9. Essentially, Bond has chosen an inferior tool for the job. A submachinegun would be quieter and have less recoil than his Rubik’s Cube of a rifle.

Danie Craig’s portrayal of Bond has one of the most practical firearms, the L119A1. However, in Spectre, he uses one of the least practical firearms. It isn’t impractical because of the firearm itself, but because of how it is used. Bond uses a Glock 17 in a FAB Defense KPOC carbine conversion kit. The Glock 17 is one of the best sidearms in the world. The KPOC kit provides a stock, two handed operation, and the provision to mount optics and lights/lasers.  However, the KPOC kit could be described as an…interesting choice. There is no practical reason to use the KPOC instead of a dedicated submachine gun. The manual of arms is awkward, the magazines feed less reliably at high rates of fire, the barrel is shorter so it is less effective, and if it jams it will take significantly longer to clear.

The reoccurring theme with Bond’s choice of weapons is that he prefers form over function. Over the years Bond has routinely selected outdated and outclassed weapons for his assignment. Is it because he’s a bad secret agent? Unlikely, aside from his terrible tradecraft he always successfully completes the mission. Is it because the film producers care more about branding and what looks cool? Almost certainly. However, I choose to believe it is because Bond is a man who favours a firearm from a forgotten era. Pistols with a certain je ne sais quoi about them. In the military, the number one rule is to “look cool”. Doesn’t matter what you’re doing as long as you look cool doing it. Whether he’s handing out his secret identity like pixie sticks on Halloween or getting into gunfights on clandestine collection missions, James Bond abides by this rule like gospel.