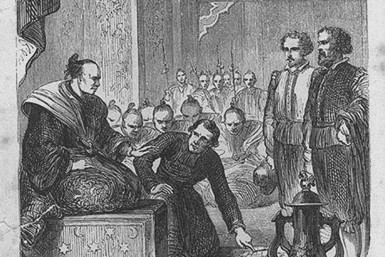 William Adams was born on the 24th of September 1564, in Gillingham, a town in the county of Kent, England and was the first white Samurai. Adams lived his childhood in comfort since his family was quite wealthy until the father died and Adams, at the age of 12, had to start working as an apprentice at the shipyard of Nicholas Diggins. He learned how to build ships, read the stars and navigate in the open oceans. In 1588, he joined the British Navy as Master of Supply ship during the Spanish Armada’s invasion.

Ten years later, in 1598, Adams travelled with his brother Thomas to the Netherlands, and they both became part of a Dutch merchant fleet. The mission of the Dutch East India Companies was to counter the Portuguese monopoly in the East Indies. Consequently, in June 1958, five merchant warships left the Netherlands to reach the East Indies through the Strait of Magellan. During the journey, a storm destroyed two fleets. Another one blew off course. Some pirates attacked the other one destroying it during an attack. Adams’ brother lost his life. The only ship fleet left was the one that Adams’ was sailing. It was called Liefde, and only 23 men, out of 500, survived.

In the 17th century, Japan was still a mysterious country. Japanese authorities didn’t allow many foreigners into their land. Also, from Europe, it was not easy to reach it. The only foreigners welcomed in the country were the Portuguese, which arrived in Japan in 1549. They soon started trading with the local communities and Portuguese leaders sent missionaries to spread Christianity.

After two years, in 1600, Liefde reached Japan and anchored in Kyushu, an island in the South of Japan. Arrived in the village of Bungo, the local men helped the sailors. Until the Lord of Bungo join them with a Jesuit Priest who was also an interpreter. Against the Jesuit’s advice of killing the foreigners, the Japanese lord decided to imprison them. The lackeys of the Shogun moved the prisoners to a prison in Osaka Castle by Tokugawa Ieyasu. Tokugawa was the Japanese Shogun, the de facto ruler of Japan. The Shogun was surprised to see men with blue eyes and golden hair. He was used to the dark-haired Portuguese. The Shogun was curious to get to know these foreigners and where they came from.

In May 1600, Tokugawa Ieyasu decided to interrogate Adams with the help of a Portuguese interpreter. The Shogun asked him about the politics, religion and culture of his country. He asked how they reached Japan. Adams had an answer for everything. He explained to him why his country was at war with Spain and Portugal and introduced the Shogun to Protestantism, a religion still unknown by the Japanese.

In the next three months, the Shogun kept interrogating Adams. He was impressed with the English man knowledge of shipbuilding, navigation and mathematics. He soon started to realise that Adams could have helped him get rid of the Portuguese. Precisely those Portuguese who were trying to gain control of the country through trade and religion.

Nonetheless the Shogun freed Adams, he was not allowed to go back to England, where he had a wife and a kid since he was too valuable for Tokugawa Ieyasu.

To keep Adams in Japan and gain his loyalty, the Shogun gave the English man the title of Samurai. Adams was also given 80 servants, an estate in Miura, in the South of Edo, and two ceremonial katanas.

Adams kept serving the Shogun, and in 1604 he helped during the construction of the first Japanese western-style warship. He also became the Western advisor of the Shogun and his interpreter. To avoid its departure, the Shogun stated: “William Adams is dead! The Samurai Miura Anjin is born!” Miura due to the location of the estate and Anjin meant pilot.

Adams began his new life in Japan, married Oyuki and they had two children, Joseph and Susanna.

Adams was then given the task of bringing to Japan new foreign traders and consequently, in 1613, he set up the first Dutch trading factory with the Dutch East India Company at Hirado, in Kyushu, northwest of Nagasaki. The year after, the Shogun banished the Portuguese Jesuits from Japan and allowed Adams to undertake various overseas voyages. In 1616 Tokugawa Ieyasu died. Tokugawa Hidetada, his successor, had a different vision than the one of the previous Shogun. Japan became isolationist, the only foreign trade allowed in the country was the Dutch one and Adams’ influence greatly diminished.

William Adams Towards the End of his Life

William Adams died on the 16th of May 1620 in Hirado. In his will, he stated that his estates had to be given half to his English family and half to Joseph and Susanna. In Japan, he managed to integrate into the local community, and also earned the Japanese lords’ trust. Nonetheless, he never lost his ties with his motherland, Adams was a proud member of Japan and he was often referred to by England as “the neutralised Japaner”.