New Perils for West African Security After the US Troop Withdrawal 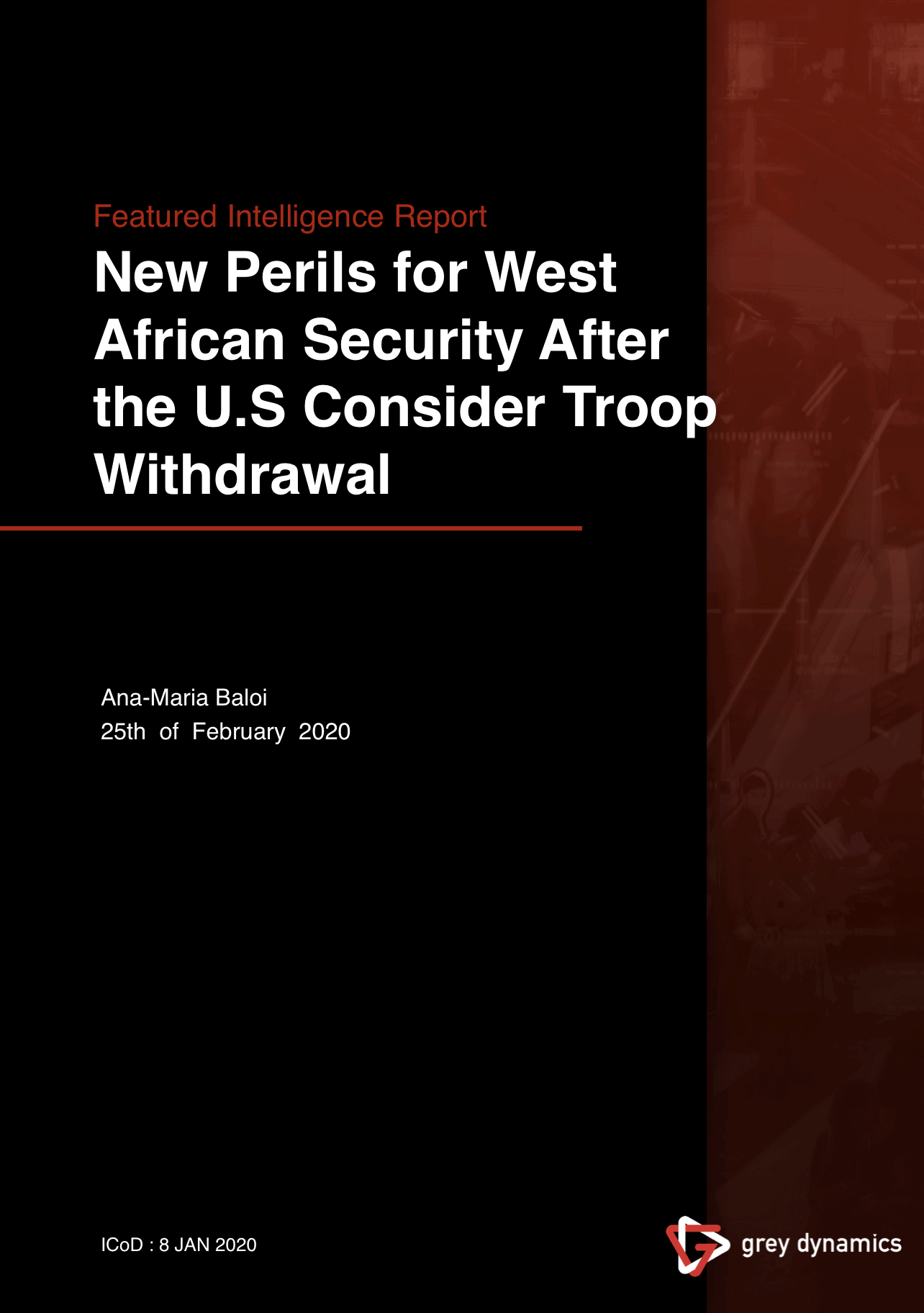 In 2020, US Secretary of Defense Mark Esper ordered Africa Command to draft a withdrawal plan, as well as a plan for redeploying troops

KJ-1. The USA is rethinking its strategic goals; thus, movements of troops are expected in 2020. The 2018 National Defense Strategy announced that US’s top strategic priority is China, meaning that its involvement in the fight against jihadism will gradually decrease.

KJ-2. The withdrawal is expected to highly affect regional stability. The vacuum of power will allow terrorist groups to advance their agenda, while the flow of refugees into Europe will peak.

KJ-3. Lacking the necessary capabilities for efficiently countering the terrorist threat, West African states are expected to turn to China and Russia for economic and military assistance. This development is likely to trigger a chain reaction, undermining the democratic values, with the aim of seizing power and maintaining regional security.

US seeks to reorganize its troops across the Globe. Its foreign policy focus will shift from violent non-state actors active in the Middle East and the Sahel to state actors – primarily China and Russia. The US has around 200,000 troops stationed abroad, of which 6 to 7 thousand operate in Africa. Most of them are concentrated in Western part of the continent, assisting regional governments and other foreign missions in the fight against jihadism.

US Secretary of Defense Mark Esper ordered Africa Command to draft a withdrawal plan, as well as a plan for redeploying troops until January 2020. The new objective for the American foreign policy is for the forces sent abroad to limit their efforts only to fight terror groups that have the capabilities to attack US soil. According to the US Department of Defense, none of the extremist groups in West Africa possesses the necessary means to conduct an attack inside American borders.

Officials from the State Department disagree with this initiative, as it contradicts an already established policy of countering terrorism in the Sahel. Esper is yet to decide whether the US will completely withdraw their troops from the region or whether major cuts in personnel will become effective this year. If the US will leave West Africa a recently built $110 million drone base in Niger will be abandoned. Moreover, under the UN mandate, US is supporting French troops facing the expansion of terror groups in Mali, Niger and Burkina Faso.

The US mission in West Africa is to assist and support local and foreign forces combating the jihadists in the Sahel. The most active groups across the region are the Islamic State of Greater Sahara (ISGS), Boko Haram, Al Qaeda as well as the Islamic State West Africa Province (ISWAP). Some other rebel militias include the Fulani Herdsmen and the Movement for Unity and Jihad in West Africa (MUJAO). According to assessments made by the State department, regional governments and international forces keep losing ground to jihadists.

One of the bases US is currently operating is located in Niger (see Annex 2). Drone Air Base 201 became operational in November 2019 and the budget for its construction was $110 million. Many regional intelligence, surveillance and reconnaissance operations are being conducted out of Nigerien Air Base 201 in Agadez.

Revisionist Powers Expected to take Over the Region

Opposed views include that of Gen. Stephen J. Townsend, the head of Africa Command (AFRICOM). He stated that Africa needs American forces on its territory, due to increased Chinese and Russian economic and military influence. An American withdrawal will create a power vacuum for revisionist powers seeking to expand their regional advantage. In West Africa, China already is the region’s major investor, with many regimes counting on It to fund local infrastructure projects.

Another important international force in the region is France. The country deployed approximately 4,500 troops under Operation Barkhane in West Africa who struggle to defeat ISGS and Al Qaeda fighters. French troops rely on American provided intelligence, as well as logistical support and aerial refueling. On the 10th of December 2019, 71 Nigerian soldiers died during a jihadist attack. Only a few days later, 13 French soldiers lost their lives while conducting an operation against ISGS.

For France to stay capable of countering the West African jihadists, the country will have to push for a more aggressive European strategy against terrorism. Tensions are expected to rise due to European Union’s reluctance to deploy troops. The block is already struggling in spending the US requested 2% of the national GDP for defence inside NATO. The costs for the US support are estimated $45 million a year, money the US Defense Department is no longer interested in spending for missions considered to be out of US’s strategic focus.

The US Department of Defence and the State Department disagree on pulling out troops from West Africa. The Congress has not been consulted yet, neither was the intelligence community.  While the State Department is committed to combat insurgency movements in the area, the Defense department considers the deployment of American troops in the Sahel unnecessary.

A special task force created by State Secretary Mike Pompeo is currently focusing on security issues across the region.  However, in case of a withdrawal, the task force will end its activity, regional governments being forced to face the threats on their own. As most of the West African countries struggle with severe poverty, inefficient governance, corruption as well as religious and ethnic conflicts, the terrorist threat is highly likely to expand further, taking over large swaths of land in the Sahel.