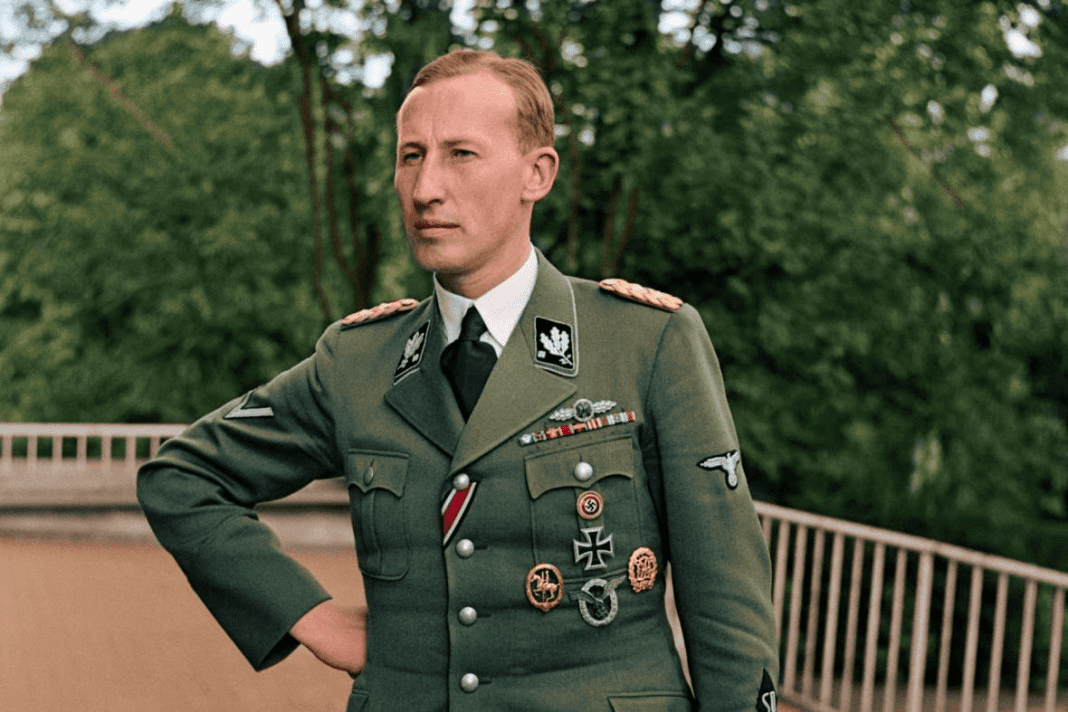 Despite training, practice and resources, paramilitary operations are affected by time constraints as well as operational limitations and losses. In World War 2, attempted assassinations like ‘Operation Valkyrie’ remain visible due to the target and the nature of a targeted killing. Less known is Operation Anthropoid, the operation to assassinate high-ranking SS general and Reichsprotektor of Bohemia and Moravia Reinhard Heydrich.

A Black Hole for Intelligence

After the signature of the Munich agreement and the start of WWII, the central European region became a key industrial player for Nazi Germany. Simultaneously, in Czechoslovakia and particularly in Bohemia and Moravia, resistance networks operated by allied military and intelligence bodies became decimated at the arrival of Heydrich. From early 1941 until May 1942, the Special Operations Executive (SOE) as well as exiled governments struggled to obtain intelligence and deter German operations in the Czech region.

Pressure to the Czechoslovakian Exiled Government

The Czech government-in-exile was under threat of alienation by allied governments since 1939. The underground resistance created very limited threats to Nazi occupation. The exiled government was actually perceived to have fled instead of confronted the invasion. A minimal contribution to the allied cause was further affected by an alternate exiled government in the Soviet Union looking for representation. Opposition rose from exiled politicians in Paris who rejected the figure of Eduard Benes, the president-in-exile and crucial organiser of Operation Anthropoid. With Bohemia and Moravia being crucial to Germany’s war effort, particularly due to its industrial warfare contribution, attribution of responsibility fell on Benes and the exiled government in London.

In early 1941, the SOE, the Secret Intelligence Service (SIS) and the Czech representative in the 2nd MOD Frantisek Moravec discussed the possibility of deploying covert paratroopers in Czechoslovakia. The operation, although financed and supported by the SOE and SIS, was in its majority under the control of the Czech exiled government. Benes and Moravec, the latter being the head of intelligence, coordinated the general framework of Operation Anthropoid from recruitment until execution.

A Czech brigade stationed in Leamington Spa since 1940, composed of 3,276 men, served as a recruitment pool to gather recruits. The SOE recruited potential candidates through different Special Training Schools (STS), specialised centres for training in covert and clandestine abilities. Within the preparation led by Captain Jaroslav Sustr, agents Josef Gabčík and Jan Kubis became ultimately selected for the role of assassinating Heydrich. At the same time, other agents became selected to participate in clandestine missions over the Czech territory. Operation Anthropoid, while symbolic, was only a part of a larger effort by Czech forces to aid the Allied cause.

While graduating separately, both Gabcik and Kubis successfully completed the STS 25 course in the summer of 1941. Designed as an assault combat course in Garramor and Camusdarragh in northern Scotland, teams of 20 perfected endurance and weapons handling for a duration of 6 weeks. Both Gabcik and Kubis received praise from SOE instructors, becoming destined to Manchester to evaluate para-trooping abilities.

Located (at the time an RAF base) in Wilmslow, the paratrooper course was carried out following the assault course in northern Scotland. Parachuting abilities became perfected as to all infiltration within Czechoslovakia depended on aerial drops. Candidates became filtered out due to accidents or poor performance like Karel Svoboda. A course candidate, Svoboda was the original choice to accompany Gabcik on Operation Anthropoid. An accident by parachuting off a hot air balloon pushed Kubis to be ultimately selected to accompany Gabcik.

The last course of STS ‘17’ was stationed in Brickendonbury and focused on sabotage. All selected members of the Czech brigade participated in the course, including Gabcik and Kubis. Explosive handling and understanding was crucial to execute Operation Anthropoid and support the paramilitary assault capabilities exercised in Garramor. The modified anti-tank grenades ‘Model 73’ used in practice are ultimately used in May 1942 to assassinate Heydrich.

Other frequent missions deployed established radio contact and reinforced the connection between Czech resistance and London. Contradictory, Kubis and Gabcik dropped with strict instructions to avoid contact with the resistance or allies. The nature of Operation Anthropoid used clandestinity from within the resistance or SOE operations in Czechoslovakia to protect itself. The purpose was likely political, apart from operational security and preventing leaks. Other common missions within the SOE in Czechoslovakia failed and faced opposition from members of the exiled government.

On the 27-28th of December 1941, a Halifax bomber dropped Gabcik and Kubis in Czechoslovakia to carry out Operation Anthropoid. Snow and adverse weather disoriented the Halifax together with anti-aircraft defences. Gabcik and Kubis parachuted to Nehvizdy instead of Pilsen, the objective of the drop. The agents landed 20 Km to the east of Prague and 118 Km from Pilsen.

The landing beside Prague reduced the handicap provided by natural cover in Pilsen. The agents broke security procedures and informed 2 local farmers who discovered them of their status and injury. Contrary to the procedure, the approach to local civilians highly likely evaded the arrest by the SS forces patrolling the area. One of the farmers belonged to SOKOL, a Czech nationalist organisation banned by Heydrich although it still operated underground. This farmer provided the contacts and means to transfer the agents to Prague.

After avoiding suspicions of Nazi infiltration, Gabcik and Kubis fell under the control of Jan Zelenka, a former collaborator with Czech intelligence. Zelenka provided documentation and an almost-daily change of housing to avoid the Gestapo. In the first months of 1942, the SS captured agents, retrieved parachutes and confiscated radio equipment sent to provide support to the resistance. This created a likely scenario of paranoia combined with the knowledge of potential agents having deployed within Czechoslovakia.

Changing safe houses almost daily, the agents informed the exiled government on the 1st of March of their arrival in Prague, after 4 months, 1 injury and several security measures broken.

Generating intelligence to decide how and when to attack Heydrich was necessary, both through informers and first-hand surveillance. Frantisek Sefarík was a joiner in the staff of the Panenske Brezany, the residence of Heydrich in Prague. Sefarík, using 2 females as letter-drop couriers, informed Gabcik and Kubis of Heydrich, his SS escort and vehicle movements outside the residence. The clock-repairer Josef Novotny, responsible for clock repairs in the residence, informed of Heydrich’s schedule to Gabcik and Kubis. This insider information, combined with the increased SS presence after the discovery of material dropped by the SOE, pushed Operation Anthropoid to be carried during Heydrich’s vehicle journeys.

Gabcik and Kubis dedicated the days to locate the site of the ambush, hidden in ditches to avoid suspicion, questions or capture. Using the intelligence already obtained, the agents focused on the issue of fleeing and returning safely post-Operation Anthropoid. The urban environment of Prague prevented the operation in the city. The agents chose Holešovice, a suburb with fewer SS personnel where a sharp turn at a hairpin forced Heydrich’s vehicle to slow down.

Novotny informed Gabcik and Kubis in May 1942 of the opportunities and threats to Operation Anthropoid. The potential exit of Heydrich to another European destination following his success in undermining the resistance in Prague likely created a sense of urgency to act. Simultaneously, Novotny also informed of the precise schedule of Heydrich on the 27th of May 1942, which included a passage through Holešovice.

The resistance presented objections to the operation in fear of reprisals. Some objections emerged as late as the 26th of May, a day prior to Operation Anthropoid. President Beneš nevertheless already approved the operation, insulating the complaints and objections from affecting the execution of the mission.

The assassination of Heydrich would last 8 days, abandoning the speed-factor on which the agents counted on to escape. Gabcik, placed at the hairpin on street Rudé Armády VII, assembled the STEN gun under his raincoat. Kubis, under his raincoat, prepared the type 73 anti-tank grenades adapted for sabotage and clandestine operations. As Heydrich approached the hairpin and the vehicle slowed down to approximately 20 Km per hour, Gabcik fired a jammed STEN gun. As the driver chased Gabcik away, Kubis intervened and used the grenade to target the side of the convertible Heydrich was located on. Heydrich, taken to hospital, would die 8 days later on the 4th of June due to internal bleeding and injuries sustained in the attack.

Operation Anthropoid was directly responsible for massacres and persecutions, as well as the death of both Gabcik and Kubis. The SS became more aware of the presence of resistance members after the death of Heydrich. The increase in surveillance made activity by the resistance easy to detect. The Nazi delegation in Prague established a curfew from 6PM-9AM, as well as a reward of 10 million Czech crowns.

Hitler ordered the execution of all males 15 years old or above in the village of Lidice. The economic reward and fear pushed Curda, an SOE parachutist, to walk into the Gestapo HQ in Prague and inform authorities of the location of Gabcik and Kubis. Hiding in the hidden basement of a central church, a firefight broke out between more than 200 SS officers and the agents. Both Gabcik and Kubis would die from wounds suffered in the church.