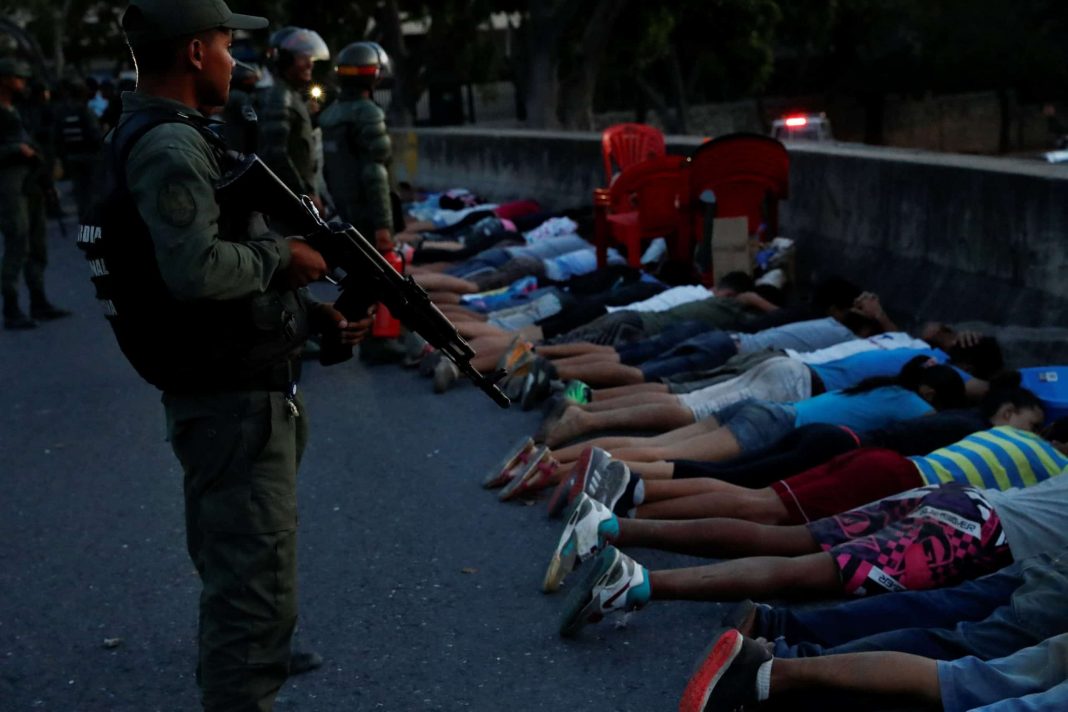 The Venezuelan Armed Forces (FANB) have played an active role in the domestic turmoil since 2014, suppressing opposition and using force to limit the risk of dissidence. In March 2020, the US indicted Nicolas Maduro with criminal charges, offering $15 million for his arrest, alleging his involvement in drug trafficking and criminal activities. As of September 2020, 5,098,473 citizens fled Venezuela, equal to one-sixth of its population. In the midst of the fragmented environment in Venezuela, the role played by the FANB is increasing:

Why Is This Important?

In September the UN published a report on the human right violations of the FANB between 2014-2017. Opposition groups were targeted and subjected to abusive practices such as torture, sexual aggression and other violent acts. 3,479 politically-driven arrests were carried out by the Bolivarian Intelligence (SEBIN) and FANB since 2014, of which 902 were not carried out during protests.

The lack of support observed in the Venezuelan Armed Forces for the April 2019 Freedom Operation makes it unlikely that the armed forces would currently incite a rebellion. Similar to any Dynamics article in which Colectivos and their role were discussed, law enforcement and armed forces are used as a tool of oppression. Nevertheless, their structure and current situation in Venezuela makes the situation increasingly unstable.

The FANB is comprised of 4 main bodies and an auxiliary fifth. These are the Army, Air Force, Navy, Bolivarian National Guard (GNB) and the fifth is the Bolivarian militia. The first 4 are professionally trained law enforcement and military personnel, while the fifth is a civilian militia armed and controlled by the FANB command. Reports suggest that there are 235,000 first-line personnel, including the militia.

The concept of a militia responds to a domestic threat of rebellion and opposition. Maduro claimed the militia was to be expanded from 100,000 to 500,000 members in 2017. In April there were claims of the Militia recruitment to be 4,156,567 members. This makes any precise estimate on the exact figure of militants unrealistic. In January, the militia body was constitutionally changed to be considered an official part of the FANB rather than an auxiliary force.

Recent exercises like the Bolivarian Shield suggest 2 conclusions. Firstly, the legitimisation of civilian-military bodies as a standard FANB component. Secondly, the likely dependence of the government to maintain public opposition and critics at a minimum using non-professional law-enforcement bodies.

The Army, Navy and Air Force are divided into 6 Strategic Defence Regions (REDI) across the country, which are subsequently divided into Zones of Integral Defence (ZODI). The REDI’s are the Capital, Central, Occidental, Oriental, Guayana, Los Llanos and Maritima regions. The GNB is divided into 24 Zone of Commands (ZC) separated by the different states in Venezuela. Maduro is entitled to designate an official to lead each region as well as ZC’s in Venezuela.

In August 2020, 5 officials to be appointed as heads of ZC’s in Zulia were retracted. This is due to the refusal of existing leaders to abandon their posts in regions affluent with narco-trafficking. The structure of the Venezuelan Armed Forces likely pushes REDI’s and ZC’s to not act through a cooperative but through an enrichment interest. This fuels illicit traffic with the permission of the government.

The FANB highly likely benefits from the current state of chaos along the Colombian border. The autonomy of the military structure enables groups within each ZODI to benefit from illicit trafficking accordingly. Simultaneously, confrontations between forces and non-state actors occur when there is a conflict of interests. Members of the GNB denounced the cooperation between higher authorities and drug-traffickers. Trucks entered Venezuela through Paraguachón to the state of Zulia loaded with narcotics under the ‘protection of governmental figures’, and headed to Guerrero where state officials ensured the continuity of the transport.

3,000 members of the FANB were sent to the Colombian border in 2019 due to a rise in the perceived threat. In Apure in September 2020, 4 members of the military died after a confrontation with criminal actors in a region typically
controlled by the ELN.

Andrei Serbin Pont, International Analyst and director of CRIES was interviewed by Grey Dynamics regarding the current FANB environment and dynamics. In the interview, the international analyst said that the armed forces in Venezuela are fragmented. Desertion rates are growing despite a lack of official figures, and military bodies within REDI’s semi-autonomously cooperate with armed actors whenever it is of interest. Also, the state of Bolívar was described as a ‘free-for-all’, in which there was a conflict between different actors and government forces over the control and influence of mineral extraction.

The fragmented state of the military, although leading to an increase in violence and competition, is the same driver which normalises the current dynamic and structure of the FANB. Sporadic conflicts and a mixture of governmental and non-state actors do not deter the FANB or Maduro to modify the military organisation. The profits obtained from the same non-state actors are reinforcements which lower the likelihood of an internal coup within the FANB.

The cycle of cooperation and confrontations, although high-risk, was normalised thanks to the autonomous structure of the FANB. According to Andrei Serbin Pont, conflicts are tolerated as long as a general incentive and benefits are maintained, thus the interests of armed illegal actors are partly prioritised.

Efforts to train, incentivise and maintain the capability of the FANB are highly likely indicators of the constant governmental perception of being under imminent threat. Whether true or not, domestic exercises have been reinforced during September through cooperation between the Venezuelan Armed Forces and the militia. The militia was reportedly trained in crowd control and defence of key infrastructures like airports and highways.

According to Andrei Serbin Pont, recent exercises are a propaganda tool but also portray the importance given within the government to different regions of Venezuela like Caracas and the northern coast. The militia, according to him, never intends to realistically tackle an external threat but rather maintain the domestic opposition and threat to a minimum.

The threats, domestic and external, are all portrayed in the eyes of the governments to be the ever-lasting threat of a US imperialist invasion, Pont stated. The government legitimises the use of civilian law-enforcement bodies since domestic opposition is portrayed as a foreign threat. The civilian involvement in law-enforcement makes it likely that there will be a generally higher degree of loyalty amongst militias than amongst FANB members.

This likely reinforces the dependency of the government on the use of military force. Also, it decreases the likelihood of an internal coup within the FANB due to the elevated risk to the life of civilians and the instability of the FANB structure.