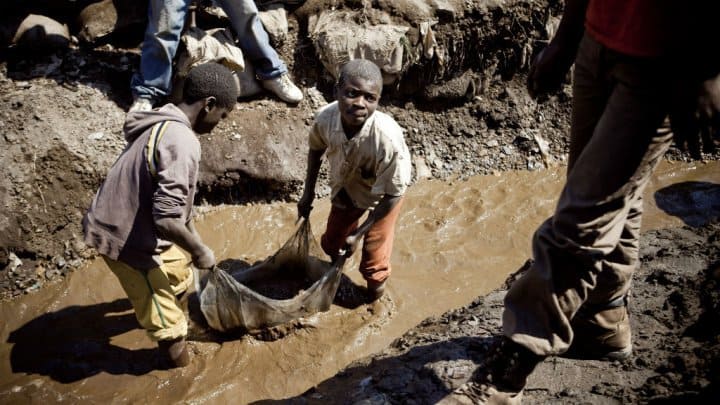 KJ-1. The Democratic Republic of the Congo (DRC) is the highest exporter of Cobalt in the world. The artisanal (independent) mining sector surrounding this is open to exploitation.

KJ-2. Children as young as seven are working in conditions that threaten life. A lawsuit has been launched against Big Tech: Apple, Google, Microsoft, Tesla and Dell for child exploitation violations.

KJ-3. The COVID-19 pandemic has significantly hit the market value of Cobalt. It is likely to hinder government efforts to combat child labour and provide alternative employment.

Cobalt, the DRC and the Global Market

Cobalt is one of the key minerals found in everyday technology. It is used in a wide range of industries and can be referred to as a technology enabling an element. As a crucial part of the supply chain for global technology companies, the DRC has seen its exports of the mineral rise exponentially since the turn of the millennium.

The exports originating from the DRC’s ‘Copperbelt’ in the south make up the majority of the worlds Cobalt supply, accounting for over 60% of the world’s supply. With such a high export dependency on one mineral, it is almost certain that the COVID-19 pandemic will have long-reaching effects.

There is already evidence of a slowdown in mining. While mining within the DRC slowed down by 3.8% in 2019, there is predicted to be an 18.2% drop in 2020 global output according to a recent GlobalData Energy report. Due to this drop, DRC output is expected to drop from 100Kt to 78.4Kt. The same forecast does not predict it to getting back to its pre-2020 production until 2023.

The damage to the economy through this forecasted reduction in exports, it will likely lead to worsening of conditions for artisanal miners within the DRC.

The use of child labour in the DRC artisanal mining industry is widespread. In its 2019 report, the United States Bureau of International Labor Affairs (ILA) estimated that, out of the estimated 255,000 artisanal miners, 35,000 (13.7%) are children.

The conditions for children within artisanal mining can be treacherous and life-threatening. A Guardian investigation in 2018 followed Cobalt miners, and under-18s exposed to threats of tunnel collapse and days long shifts. Children can spend up to 24 hours in a mine hacking at a Heterogenite (Cobalt) vein 26 meters below the surface with no proper safety measures. For this work, wages can be as low as $1 a day, with a portion lost to officials, meant to keep children away from this type of work, in form of bribes.

Although several factors are leading to the exploitation of children within the mining industry, a weak government is almost certainly the largest contributing influence. The ILA report found that just under half of the 51,574 public schools in the DRC were receiving government funding. Should a school not receive funding, parents are asked to contribute for supplies and teachers’ wages. Lack of funding almost certainly pulls a strain on an impoverished population leading parents to take their children with them to work and help earn as much as they can in a day.

Global big tech companies are among the highest users of Cobalt around the world while fueling child exploitation. In December of 2019, a lawsuit was filed against five of the biggest tech companies in the world:

In August of 2020, the same month as the motion to dismiss, the Fair Cobalt Alliance (FCA) was announced. Tesla and Glencore, a Swiss mining operation also named in the lawsuit, have been listed as members of this new initiative. Among the goals of the FCA is to Professionalise the management of artisanal mining, to build capacity and that lessons learned will not be lost. As well as this goal, the FCA also aims to rid the artisanal operations of child labour by investing in the communities to provide alternative income, as well as increasing school enrollment.

Knowledge of the link between Child labour and Cobalt mining in the DRC is becoming a mainstream concern. With this and the drive to end child labour, there are several key concerns about what the future will hold for the local population.

Cobalt already saw a decrease in value before the COVID-19 pandemic started impacting global trade. The price had dropped from $100,000 per ton in 2018 to $30,000 per ton in 2019. 2019 also saw Glencore close the largest Cobalt mine in the world, the Mutanda mine. The previous year had seen the mine produce 27,000 tons of Cobalt. Not only has this lost the DRC government $1.4 billion in tax revenue, Glencore has closed all but one mine costing the population 17,000 jobs. With a drop in price due to over mining of the mineral and China, the main destination of the world’s Cobalt, reducing its imports, COVID-19 is almost certainly going to cause more disruption to the mining industry in the DRC.

Tesla committed to reducing its use of Cobalt to 0 with the invention of new battery technology. What Tesla is referring to as its new-fangled 4860 cells, it will gain 16% in range and increase its power six times over. These were announced on Tesla’s Battery Day, and it is being marketed as making the cheapest model of Tesla, the Model 3, $10,000 cheaper.

Though we are seeing action taken by Big Tech against child exploitation, the loss of income source and reduction in Cobalt prices has to be replaced somehow. The Miller Centre, in partnership with the Centre Arrupe Pour La Recherche et La Formation (CARF), a DRC based NGO, released the Mining Alternatives Project on the 14th of July 2020.

Within this report, it has highlighted fish farming as the most viable alternative for vulnerable women and children within artisanal mining. Having a long production chain that will be able to support multiple careers, and given the region’s reliance on Zambia for food, it should provide an increase in nutrition and quality of life. Other opportunities, such as local bakeries and restaurants, as well as easy access to credit and savings, were also described as essential for long term growth with the absence of artisanal mining.

However, with a lack of an adequate education system and stronger government, support will likely be hindered for many years to come. Despite President Tshisekedi in 2019, implementing an expansion for public school funding, seeing an increase in the millions of children being able to enrol, this trend needs to continue. If this does not, it is highly likely that the exploitation of children will continue.

The lawsuit in December of 2019 has likely increased the awareness of Cobalt mining exploitation and convinced multinational Big Tech companies to take notice of the supply chain. Nevertheless, with the downturn due to COVID-19 coupled with 2019’s value reduction, the DRCs attempt at education reform and preventing child labour will likely be hampered. A loss of $1.4 billion will likely impact the government’s ability to cover the costs of education reform. The Mining Alternative Project and the FCA are good starts. Still, it is highly likely more initiatives will be needed to work with the government to combat child labour and provide alternative incomes.