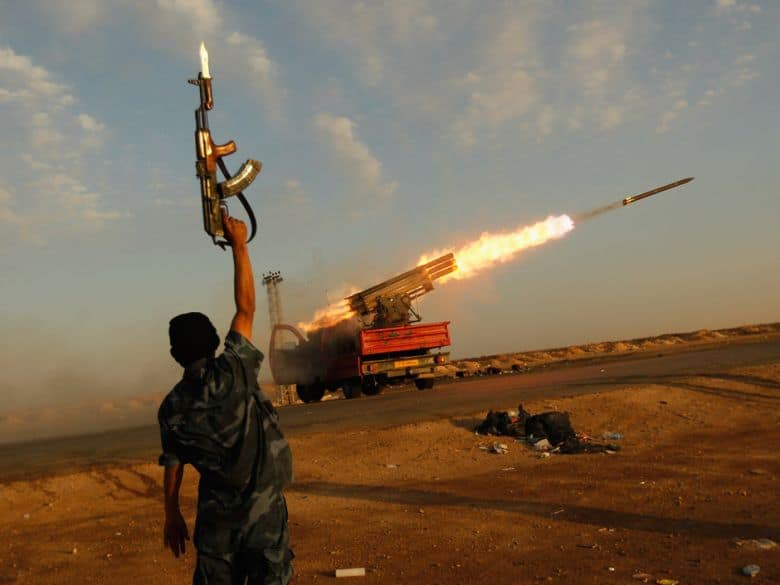 The Government of National Accord (GNA) and the House of Representatives (HoR) are in the midst of a second bloody Libyan civil war. The GNA is based in one of Libya’s main cities, Tripoli, whereas the HoR is based in the East of the country, in Tobruk. The HoR is supported by (and some would say dominated by) the Libyan National Army (LNA) headed by strong-man Field Marshal Haftar.

While GNA is the UN-supported government, the LNA controls most of the country, including most of the cities and critically, much of the oil-producing infrastructure. One of the key GNA supporters is Turkey, which recently voted in favour of deploying troops to Libya, and has extensively used drones in Libya. The LNA is supported by Russia, France, Egypt, Saudi Arabia and the UAE. A ceasefire signed with Russian and Turkish mediation in early 2020 has already largely fallen apart.

Tightening the Noose Around Tripoli

The LNA has attacked and destroyed aircraft delivering supplies to the GNA in the past and is aware that attacks on GNA logistics are optimal, as it is hard to counteract those supplies once they disperse into Libya itself. The ceasing of delivery of military materiel was a key condition to the January 2020 ceasefire, and one that neither side has observed. Unsurprisingly, Haftar’s forces broke the ceasefire, attacking LNA positions in late January 2020. Though Turkish naval ships have been observed (see figure 1) near Tripoli recently, there is no evidence that the LNA has targeted them yet.

Misrata airport was targeted by the LNA in August 2019, following its expansion as a military installation and construction of hangars (see figure 2). Although it is and was primarily a civilian airport, it seems to have been included under the LNA’s no-fly zone area, as Turkish drones and aircraft were operating from there. In December 2019, a new, small airstrip has been constructed (closer to relative safety) by Turkey and the GNA in Tripoli.

Turkey and the GNA are adapting to LNA counter-drone tactics and diversifying their operating locations. The construction and expansion of alternative airstrips suggest that the GNA requires multiple potential launches, control, and landing sites for its drones, such that it is harder for the LNA to attack and destroy them on the ground, as has happened in 2019.

Erdogan’s government has sent much in the way of supplies, small arms, munitions, and aircraft (such as the Bayraktar TB2 drones) to the GNA, and has publicly stated support for the GNA, even going so far as to allow direct Turkish troop deployment to Libya. See figure 3 for evidence posted online by a militia in receipt of some of this material, being offloaded from Ro-Ro Cargo Vessel “Amazon”. Marsad (a news outlet), among other outlets, also alleges that Turkey is paying for and shuttling Jihadist fighters to go from Syria to Libya to fight for the GNA.

Erdogan wishes to create “a balance of power with the Haftar forces”, or a stalemate, which may then lead to negotiations between the rival governments and their respective sponsors. The longer the second Libyan civil war lasts, and the longer that Haftar is not able to cut off Turkish supplies, the stronger that the GNA will become. It remains to be seen what (if any) Russian response this activity will trigger.

While countries like Turkey and Russia persist in trying to change the facts on the ground in their favour, ahead of peace talks that could resolve the Libyan Civil War, there is little chance of success for ceasefires, and the agreements made in Berlin will likely be ignored by all sides.