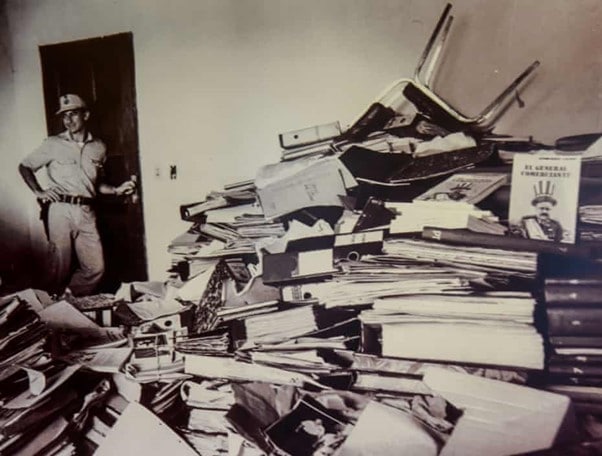 Operation Condor integrated state terror across South America during the Cold War, after successive military coups. From 1975 to 1977 military regimes in Brazil, Paraguay, Uruguay, Chile, and Argentina rounded up thousands of people. These were suspected of having affiliations with radical leftist movements. Authorities put them into concentration camps and secret detention centres.

Three-phase made up the Operation Condor:

Although Condor operatives hunted down targets in all territories, they particularly focused on Argentina. Because, Argentina was the refuge country for exiles escaping other military dictatorships before Argentina fell to it as well. Dispatches sent to each territory used a series of makeshift jails and torture centres. These were provided by each host (Phase 2) such as Automotores Orletti. Later on, the operative would take victims to Club Atletico. This was the codename for the basement of a police warehouse in Buenos Aires. Operatives stripped women, handcuffed and gave prisoners numbers (as Nazis did). Operatives took kidnapped victims to torture rooms by turns followed by beatings, sexual abuse and electric shocks. Hundreds were disposed of. Some of them were tossed into the sea from planes or helicopters after their captors tied them up. Others were shackled to concrete blocks or drugged so they could barely move and sink (Phase 3).

Formal coordinating offices existed in several countries. These generated a network with documents and encrypted cables over a dedicated communications network called Condortel.

In 1992, Jose Agustin Fernandez received a tip-off. The insights provided where the whereabouts of the secret police archive of General Alfredo Stroessner. Stroessner had been in power from 1954 to 1989. Fernandez’s haul name was the Archive of Terror. The documents established that Condor was formally created in November 1975. That was the moment when Pinochet’s spy chief, Manuel Contreras, invited 50 intelligence officers. These came from several countries to the Army War Academy in La Alameda. It was only after the archives were found that the authoties puzzled the disparate stories of the victims into one.

The number of victims is uncertain. Nonetheless, TeleSUR did an estimate using NGO figures, government, independent investigations, and press reports:

The United States saw a revolution in Latin America as an existential threat. To strengthen anti-communist forces, the US pumped money and weapons to armed forces across the region, which increased the power of the military leading to eventually support the atrocities. US collaboration with dictatorships in South America constituted a substantial part of its Cold War-era imperialist foreign policy

John Dinges and Saul Landau limited public knowledge to an FBI quote in their published in 1980. They were investigating the murders of a former Chilean ambassador and his American assistant, killed in Washington DC by Pinochet’s agents.

The methods and strategies employed by Condor operatives had their roots in the US training that Latin American militaries received through the School of the Americas, which aimed to pass on the battlefield and counterinsurgency lessons the US military learned over its past decades of war-making through Guatemala and Vietnam’s CIA-led Phoenix Program.

Adding to that, apart from Condortel, the Swiss encryption company Crypto AG was a secret CIA front that gave them an open door to the encrypted communications of governments that used it. This showed that the US government was highly likely aware of the effect Condor had.

Those seeking justice had to rely on a judicial spider web of national laws, international treaties, and rulings by human rights tribunals. The individuals they pursue are often old men, but a network of survivors, lawyers, investigators and academics, like the post-war Nazi-Hunters, are making sure they don’t leave this world untried.

The price of ending dictatorship in South America was amnesty. In this regard, authorities could not charge state representatives with crimes committed during the regime’s years in power. Operation Condor was a weak spot for amnesty laws. The perpetrators stole children, a crime that amnesties do not cover. They also wrongly assumed that amnesties would cover crimes committed on foreign soil and hid their killings by making the victims disappear, making it unresolved crimes uncovered by a statute of limitations or amnesty for past events.

In the late 90s that Baltasar Garzon, a Spanish judge, began testing a previously ignored law that obliged Spain to pursue any alleged human rights abuses anywhere in the world if their own countries refused to try them. Garzon and a group of prosecutors opened investigations for genocide and terrorism against Argentina’s former military junta and Pinochet’s regime. Authorities arrested Pinochet in London and held him for 17 months. Later on Labour party home secretary Jack Straw stymied the extradition to Spain. Authorities finally sent Pinochet back to Chile on health grounds.

The first major criminal investigation after Garzon’s was in Italy against Uruguayan security officials. Much of what we know today is in pieces in dozens of different countries. One of the most important pieces of evidence comes from the US intelligence papers dealing with Argentina, declassified by orders of Barack Obama. Authorities completed the handover in 2019 with 47,000 pages. incriminating US and European governments on acknowledging Operation Condor.

Although quite a grey area in cooperation between countries and the liability of the criminals, the survivors and victims are slowly getting the peace they deserve after years of secrets.