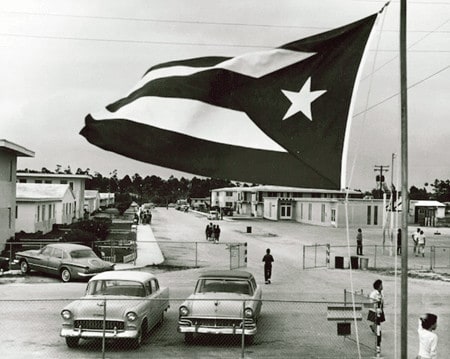 Operation Peter Pan was a US Government-supported effort to evacuate Cuban children from the threat of Fidel Castro’s communist regime.

The overthrow of Fulgencio Batista in January 1959 offered a new promise to the Cuban people. Fidel Castro was the beginning of what many Cubans thought would be a new life under democracy. However, this was not the case.

The Castro Regime began in 1960 and quickly soured relations with the US. Castro’s government nationalised foreign assets in Cuba, increased taxes on US imports, and established trade deals with the Soviet Union. Castro also brought Communist party members into the government and executed opposition members, raising fears of a new dictatorship.

The US and the Soviet Union fought many proxy battles – Cuban policy was one of them. The US severed diplomatic and political tied with Cuba during this period due to Castro’s allegiance with the Communist Party and growing relationship with the Soviet Union.

Operation Peter Pan was a US Government-supported effort to evacuate Cuban children from Cuba. The operation was the largest unaccompanied child refugee exodus in the Western Hemisphere, providing a home in the US for over 14,000 Cuban Children.

As part of the greater Cold War effort, Operation Peter Pan showed the US’s commitment to the Cuban people while taking a stand against Castro and, therefore, against the Soviet Union.

Operación Pedro Pan, or Peter Pan in English, was a clandestine operation between 1960 and 1962. Spearheaded by the Catholic Welfare Bureau and supported by the US government, it saw over 14,000 Cuban children travel to the US to avoid growing fears of indoctrination by Castro’s communist regime.

The Catholic Welfare Bureau established the initiative in 1960 following an outcry from parents’ requests in Cuba following the increasing threat of communist indoctrination through schools. Therefore, the majority of children who moved during Operation Peter Pan were catholic. However, there were children many of different religious and ethnic backgrounds, and many were middle or lower class. Parents from these backgrounds were reluctant but willing to allow their children to move to the US alone in search of a better life and more opportunity than offered by the Castro Regime in Cuba.

Operation Peter Pan ramped up significantly when the Department of State waived all Visa requirements for Cuban children arriving in the US. As a result, many Cuban minors could travel safely, but unaccompanied, from Cuba to the US.

Once airlifted to the US, the children were sent to temporary foster homes or at specialist camps designed to look after the children and assimilate them to life in the US. This initiative named the ‘Cuban Children’s Program,’ operated until 1981 and assisted and cared for many Cuban child refugees arriving in the US.

Freedom for the Few – The ‘Golden Exile’

Whilst Operation Peter Pan offered a new life for disadvantaged Cuban children, a larger pattern of escape only being open to upper classes emerged.

Between 1959 and 1962, large numbers of Cuban migrants fled in fear of the rising communist regime. However, this escape was not open to all. It was particularly those from the upper classes of Cuban society that feared the Castro regime the most and had the most access to resources for escape.

The period between 1960 and 1962 has been named the ‘Golden Exile,’ as the vast majority of people able to leave the country were either from the upper or middle class of Cuban society. This also included affluent professionals and members of the former Batista administration.

Studies suggest that 31% of the Cubans arriving in the US in the early 1960s were highly educated and worked at a managerial level. Alejandro Portes, a leading sociologist and director of the Centre for Migration and Development at Princeton University, remarked of the Golden Exile in the late 1960s:

College professors, physicians, business owners and executives, engineers, accountants, and high school teachers are among the professions in which Cubans are found. The average occupational attainment of the refugees as a whole has been evaluated by Federal agencies as unusually high, especially in comparison with most first-generation immigrant groups.

Ultimately, the Golden Exile and Operation Peter Pan both ended in October 1962 due to the Cuban Missile Crisis, wherein US Satellites found that the Soviet Union was building nuclear devices in Cuba. The revelation meant that all international flights between Cuba and the US halted, and as such, the clandestine exodus of Cuban children stopped.

Many of the children of Operation Peter Pan went onto achieve the ‘American Dream’ in the US. The most notable of these alumni include Melquíades Martínez, a prominent lobbyist who served as the Senator of Florida from 2005 to 2009.

There are multiple support groups across social media platforms to act as ways to connect with other Cuban nationals that moved during Operation Peter Pan. These pages are full of testimonies of personal experiences and posts honouring loved ones, written by people forced to leave their families as children.

Operation Peter Pan was instrumental in the US’ Cold War strategic efforts against Communist forces and a significant and large-scale humanitarian effort to assist the Cuban people.