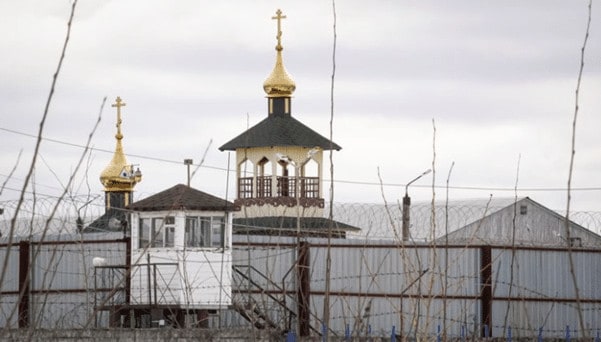 The IK-2, the Corrective Colony No. 2 of the Federal Penitentiary Service of Russia for Vladimir Oblast is located 60 miles east of Moscow, in Pokrov. This Russian prison is a “red-zone” corrective labour colony. This means that the prisoners’ life is under the control of the administration of the correction camp. The inmates live in barracks. They spend most of their time working within the prison.

Often described as “a tough penal camp with very strict rules, to put it mildly”, the IK-2 prison correction camp is one of the most feared and brutal prisons in Russia. It aims to weaken its prisoners through psychological torture and the law of silence.

In 1974, the USSR Ministry of Internal Affairs created a labour and medical dispensary where alcoholics and drug addicts were sent to be cured through hard labour. In 1994, the head of the Internal Affairs Directorate of the Vladimir Region Administration decided to reorganise the dispensary. It then became the Correctional Colony No. 2. On the 19th of August 1996, the correction facility accepted its first prisoner, and now it has the capacity for 794 inmates.

The correctional colony consists of a series of buildings made of grey bricks, watchtowers, and a gold-domed Orthodox Church. An iron fence topped with barbed wire surrounds the whole colony, which is part of a network of 700 prisons.

The IK-2 is currently hosting 800 inmates. The structure comprises twelve different units: one with ease conditions, 10 with normal conditions, and the last one with strict conditions. There is also a paint shop, a sewing production in the industrial zone, an assembly shop and a carpentry.

Most of these prisoners were on theft and drug charges, but sometimes IK-2 also hosts political prisoners and national activists.

Life in the Camp

The IK-2 not only is one of the most brutal prisons in Russia, but it is the toughest in terms of “breaking to the people”. All the prisoners have to go through psychological “tortures” with the final aim to break and weaken them. These tortures consist of isolation, deprivation of the outside, surveillance, punishments, and the prohibition of talking with the other inmates. The inmates are not only victims of psychological tortures, but also physical ones. Many prisoners, especially common criminals, were beaten and sexually assaulted while they were detained in the IK-2.

Medical neglect is very common. When the prisoner arrives at the facility, the guards confiscate his medical supplies. In the event of illness, the medical staff only gives pain killers, without a proper assessment.

The process of isolation and dehumanisation starts at the colony’s gate. There, each inmate when arrives has to crouch and say his name, last name, year of birth, and sentence.

Within the colony, there are some prisoners called “goats” or “activists”. They get privileges such as a shower, conjugal visits, and better food in exchange for spying on the other inmates. Cooperating with the administration, and reporting any kind of incorrect behaviour is also well rewarded.

According to former inmates, the day starts at 6 am. All the inmates have to recite the Russian national anthem. To follow, there is physical exercise. Prisoners have to memorise the list of the prison employees and make and unmake the beds for three hours. The activists are the ones who usually assign these tasks to the inmates. They also have the power to beat and search an inmate. Prisoners always have to stay on their feet, until 10 pm when they have to go to sleep.

The inmates rarely have personal time. Sometimes they can sit and read for half an hour, but most of the time, political inmates do not enjoy this privilege. The routine is either working all day or spending many hours watching government advertisements on the TV without looking away from the screen and with their hands tied behind their back.

The inmates cannot receive emails and the prison guards have to read and check all the letters that the inmates receive. This process can also last weeks, and sometimes months, and its purpose is to isolate even more the prisoner from the outside world. The inmate has 30 minutes a week to reply to all the letters, and a guard has to sit with him and check what he writes.

There are cameras and guards everywhere and the prison guards monitor the conversations on the phone and also the ones with lawyers. These phone calls are allowed twice a month and they cannot last more than 15 minutes. Nothing of what happens in the colony can be said or written to the loved ones.

The IK-2, one of the most brutal prisons in Russia, has hosted political activists and enemies of Putin’s regime. In this facility, the guards want to deprive the inmates of their voice and want to isolate them from the outside world.

Konstantin Kotov, arrested in 2019, is an opposition activist. He spent one year and a half in the IK-2, where he said he was under constant intimidation and isolation. After his release, he said that most of the inmates live in constant fear of breaking the rules or doing something that goes against the administration.

Pereverzin, imprisoned between 2010 and 2012 for embezzling funds while working at the Yukos oil company, wrote a memoir and stated that his time in the IK-2 was very difficult. The colony is extremely violent, cold, humid, and it is located close to a swamp. In every building, there are only five bathrooms that have to be shared with 60 inmates. He described his time in the correction colony as a time characterised by stress, tortures, bullying, and humiliation.

Both Kotovo and Pereverzin testified that they were never subject to severe physical violence from guards, probably due to their public profile. On the other hand, they both saw and heard prison guards beat other inmates.

Dmitry Demushkin, a national activist accused of inciting hatred, was imprisoned in IK-2 for two years. He described his experience in the correctional colony as being like “torture”. He stated that he spent the first months of his imprisonment in the second sector. This sector is known among the inmates as “suka” (“bitch” in Russian), where the conditions were particularly harsh and difficult. Demushkin also said that inmates have to shave every day, but they cannot touch the razors. All the inmates are shaved by the activists, who often use the razor as an instrument of torture.

Paul Whelan, an American inmate accused of espionage, said that the guards in the prison were waking him up every two hours during the night, just to check where he was or what he was doing.

Alexei Navalny, founder of the Anti-Corruption Foundation (FBK) was sentenced in March 2021 to three years and six months in the IK-2 correctional colony. Navalny was accused of failing to check in with the authorities while he was recovering in Germany from chemical poisoning.

Through his lawyers, he reported that medical treatment was denied and that he is a victim of inhuman and unlawful treatment. Through an Instagram post, he also described the prison as a “concentration camp”.

According to Kotov and other former inmates, Navalny won’t be a victim of torture or beating, due to its popularity. Nonetheless, the guards will isolate him and they will keep him away from other prisoners.