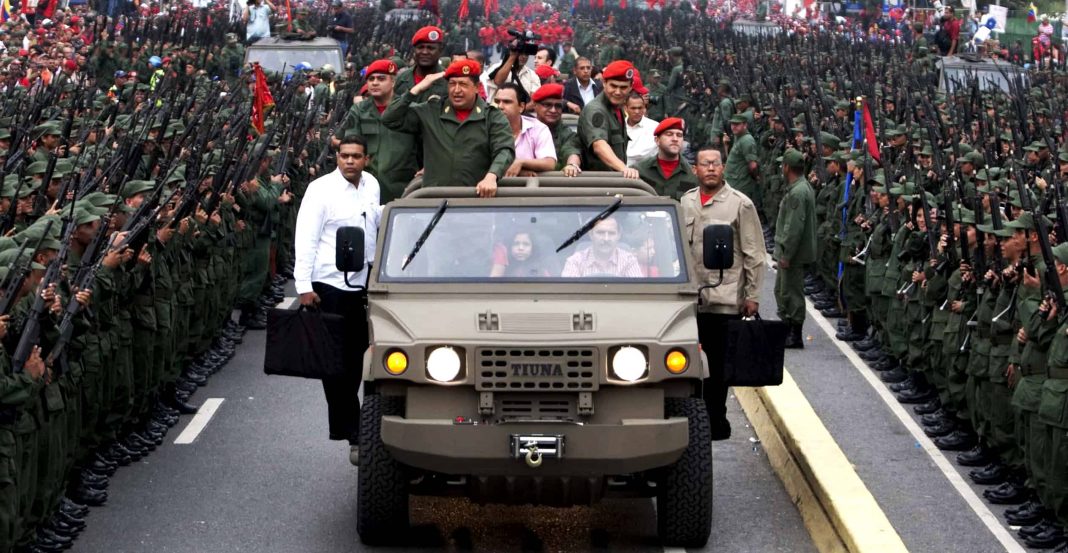 The US has been trying to overthrow Venezuela’s government for at least 17 years, but the Trump administration’s tactics are the most aggressive to date. The administration has used almost every card in the playbook, including sanctions, covert weapons shipments, propaganda campaigns, and staged politicized aid, but the Maduro regime has yet to crack. Over 600 members of Maduro’s security forces have reportedly deserted over the last few weeks, but much to the chagrin of the US, the military has not withdrawn its support despite the opposition’s offer of amnesty. The US’s attempt to create a split in armed forces and a possibly a coup in Venezuela seems to have failed for now. Is the only available option direct US military intervention?

On March 12, U.S. special envoy to Venezuela Elliott Abrams announced “very significant” sanctions against financial institutions dealing with the country in the coming days. The warning came a day after the U.S. Treasury imposed sanctions on Russian bank Evrofinance Mosnarbank for helping Venezuelan state oil firm PDVSA evade U.S. financial restrictions. These would be in addition to the Trump sanctions of August 2017 imposing a financial embargo that cut Venezuela off from most credit markets. This executive order by Trump declared Venezuela as causing a “national emergency” for America and posing “an unusual and extraordinary threat to the national security” of the United States. On March 7, Germany’s foreign minister said that for the European Union, further sanctions against Venezuela are is still on the table. Michelle Bachelet, UN Human Rights Chief,claims in a statement that the situation in Venezuela has been “exacerbated by sanctions” anddescribed the imposed sanctions as “precipitating an economic and humanitarian crisis …..”.

These threats of further sanctions come on the heels of an ‘orquestrated’ standoff in February by opposition leader Juan Guaido and Trump over the entry of humanitarian aid. They hoped that military officials would refuse to be directly and publicly complicit in the blocking of the aid at the border. The UN and the International Committee of the Red Cross refused to sanction the delivery of the aid due to its perceived politicization. At least four people died, and hundreds were injured, after clashes broke out between forces loyal to Maduro and supporters of the opposition.

The media widely reported that Maduro security forces lit fire to aid. However, this was then disproven by video footage analyzed by the New York Times on March 10 showing it was inadvertently set alight by an opposition protestor’s Molotov cocktail. Venezuela has allowed aid to be flown in from Russia and from some international organizations, but it has refused to allow in aid from the United States, describing it as a “trojan horse” for an eventual U.S. invasion.

Guaido spent several days in early March traveling between countries in the region to gather support for his campaign to form a transitional government. This is after the Venezuelan Supreme Court had banned him from travelling abroad. He visited allies in Brazil, Argentina, Paraguay, and Ecuador. This tour followed a stint in Colombia to coordinate unsuccessfully the delivery of US humanitarian aid. In Colombia, Guaido also met with US Vice President Mike Pence. Although he was threatened with arrest upon return to Venezuela, he was left to arrive freely without incident.

A North Carolina-based air freight company, 21 Air, halted flights to Venezuela following a report by McClatchy linking it to possible arms smuggling to Venezuela. Last week, Venezuelan authorities claimed they had uncovered 19 assault weapons, 118 ammunition cartridges and 90 military-grade radio antennas on board a U.S.-owned plane that had flown from Miami into Valencia—Venezuela’s third-largest city. The plane had made nearly 40 round-trip flights between Miami and spots in Venezuela and Colombia since January 11th, the day after Venezuelan President Nicolás Maduro was sworn in to a second term. McClatchy reports the chairman of the company and another employee have ties to Gemini Air Cargo, which was involved in the CIA’s rendition program during the administration of George W. Bush.

Power Outage and ‘State of Emergency’

Meanwhile, conditions in Venezuela have worsened. Much of the country, including Caracas, was without power for five days last week, fueling an already precarious situation of food shortages, violence and collapse of the public health system. There were reports of looting in the capital Caracas.Blackouts are a common occurrence as the economic crisis has worsened, but never of this magnitude. Guaido said the opposition had recorded 17 deaths caused by the blackout, but he called them “murders”. “The number of dead could not be independently confirmed. Maduro blamed the United States for the blackout, telling supporters at a rally on the 9thof March that the nation’s electric grid was sabotaged, but with no proof. The US attributed the outage to the Maduro regime’s “incompetence”. On March 11th, near the end of the blackout, US Secretary of State Mike Pompeo announced the withdrawal of remaining diplomats due to deteriorating conditions in Venezuela.

Guaido called on his international backers to “keep all options open”. However, it is unclear what options remain if the US is bent on failed coup in Venezuela. The ramping up of economic sanctions is creating a potential proxy conflict and the failed aid attempt did not result in the expected military dissent that Washington was hoping for. Nevertheless, the US has a long and ugly history of military intervention in Latin America. The question is whether Trump will back down and is unwilling or unable to enforce his tough talk. The same talk he slights his predecessor, Barack Obama, for not backing up with the Assad regime in Syria.